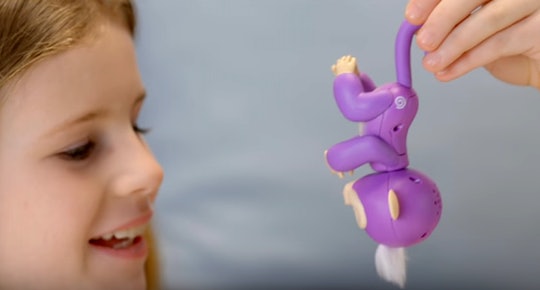 How To Make Your Fingerling Burp, Because It's Your Kid's Top Priority

If you're one of the many parents whose kids were fortunate enough to be visited by a Santa who stocked up on Fingerlings before the highly coveted little creatures sold out everywhere, congratulations! Also: How's that working out for you? For many moms and dads right now, their relief over having scored the season's hottest toy is fading with the realization that they have to help their kids figure out how to work the interactive, finger-clinging monkeys (which are actually modeled after marmosets, but whatever.) For example: How do you make a Fingerling burp?

Making a Fingerling fart is easy enough that your child could easily do it by accident (except they'll do it on purpose, over and over again): All you have to do is cup the top of the toy's head with your hand. Making your Fingerling burp, on the other hand, is slightly more complicated. These tiny critters, as you're no doubt well aware, do more than just pass gas. They snore, babble, and laugh. And, best of all (presumably), they respond to your kid's actions: If your little one blows a kiss at her Fingerling, it might blow one back (or sneeze); if she hangs it upside down by its tail, it should dissolve into giggles. Cute, right? Except, kids being kids, we all know they're going to be the most obsessed with their Fingerling's ability to do whatever it is that is not approved of at the dinner table — in this case, that includes snoring, farting, and burping.

Okay, actually it's not that much more complicated to make them burp — at least according to the official Fingerling website. Apparently, you can make a Fingerling burp the same way you make it fart, except that you hold it upside down while cradling its head. So, just to be clear: Same movement, different Fingerling position. And, like we mentioned before, if you hold your Fingerling upside down and don't cup his head, it'll just laugh at you. Still confused? This video should clear up any lingering uncertainty (fast forward to the two minute mark):

In the event that your child eventually tires of being belched at by her little plastic companion (it could happen!), don't worry: Fingerlings can make over 40 different sounds, and they're not all so rude. And while they don't "speak," per se — at least not in any actual language — kids can still on conversations of sorts with the little guys. How they "talk" back to your kids depends mostly on what position they're in; i.e., whether they're upside down, right-side up or lying down for a nap. Makes sense, when you think about it — after all, don't you respond differently to your kids if they try to talk to you when you're lying down?

Or, if you clap twice, your Fingerlings won't speak — they'll sing! If you have more than one, they'll even do a duet; in fact, Fingerlings can interact with each other in a number of ways.

If you really want to make your Fingerling part of the family, you can even include it in your kid's bedtime ritual. Fingerlings go to "sleep" if you rock them softly in your hands (making all kinds of cute drowsy noises in the process). Who knows? With any luck, this element of whimsy will get your kid excited about heading off to dreamland... or at least cooperative. Temporarily.

Look at it this way: As long as you managed to find a Fingerling (or two, or three), you might as well throw yourself full force into the mania and educate yourself on the toy's many potential tricks. Not only will your kids be totally impressed, they won't get bored of their Fingerling nearly as fast as they might have otherwise.