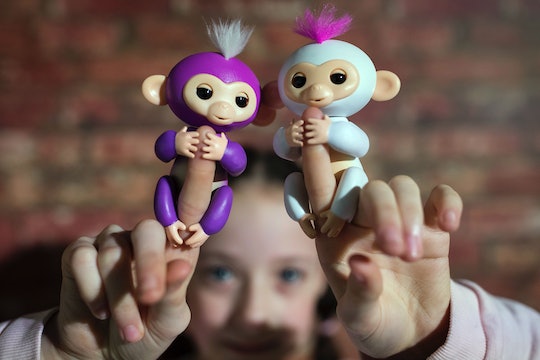 I mean, who didn’t want a pet monkey when they were a kid, right? Fingerlings, the mini monkey toys that latch onto things, have come to make your child’s — and maybe your own childhood — dreams come true. If you were lucky enough to snag one of the hottest toys of 2017 before Fingerling scalpers got them, first of all, congratulations. Second of all, your kid may be asking you how to make your Fingerling talk, because that’s the whole point of this interactive toy — interaction. And boy, they sure are cute. Their portability and interaction makes them the perfect companion and “pet” for your kid. And it’s a win-win, because you don’t even have to feed it or take it out for walks, and it sleeps basically on command.

To get your Fingerling “talking,” by maneuvering and touching different spots on the Fingerling, you can get them to make over 40 different sounds, and they will respond differently when they’re right-side up, lying down for a nap, or even hanging upside down, according to the Fingerlings website. However, while your child’s Fingerling will not necessarily speak in phrases, they do speak in “monkey language,” as well as cooing, giggling, singing, and, yes, even burping and farting. But how do you get these monkeys to do all of these cool interactive things? It’s all in how your child handles the monkey, where they touch it, and the sounds and movements your kid makes toward the Fingerling.

Even from the moment you turn on the Fingerling, it will giggle and speak in monkey gibberish while it blinks its eyes. After turning on the Fingerling, of course you’ll want to pet its head since it’s that dang adorable. Once you pet the Fingerling, it will making “cooing” sounds expressing its love and affection for you. And, if you tap its head, there are two special sensors on either side of its little monkey mohawk which “will trigger a variety of different reactions,” according to the Fingerlings website. They’ll even smooch back at your kid if they blow the Fingerling a kiss, blowing it in their face.

Fingerlings react to loud sounds when your child claps, and if they clap twice, they’ll sing a song. And if there is more than one Fingerling in the room, they’ll all sing together. How cool is that? If your child flips the Fingerling upside down, they’ll yell, “Whoo hoo!” And if you rock them back and forth, they’ll make sleepy, cooing sounds as they fall asleep. When you leave them laying down for more than 30 seconds, however, they’ll begin to whistle impatiently, and if you continue to ignore them, they’ll eventually go to sleep. To turn them back on, you just flip the switch on its head off and on again.

Now, I know you’re dying to find out how to make them burp and fart. If they’re sitting up, simply have your child cup the top of the Fingerling’s head, and a little baby monkey toot will come out. If they’re upside down and you cup their head, they’ll burp. You’re welcome.

The cool thing about this toy is that there are so many different variations of actions your kids can do with the monkey, and they'll have seemingly endless reactions. It's all in how much your child handles the toy and how hands-on they are with it. Creativity and imagination are key when playing with these Fingerlings. And now I know what I'm going to ask for Christmas next year — I don't care that I'm in my 30s. I can just say it's for the baby I'm growing who won't be able to talk or hold onto things.