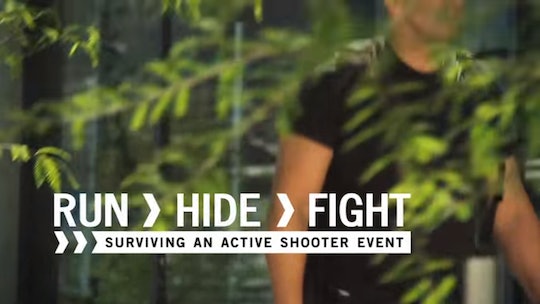 How To Protect Yourself During A Mass Shooting, Even Though You Shouldn't Have To

I wish I didn't have to write this. I wish "mass shooting" wasn't even a part of our vocabulary. But, as TIME reports, the incidence of mass shootings in the U.S. has quadrupled since the 1970s, and nobody in a position of power to do something about it has, so here we are. As of Wednesday evening, 14 people are dead and upwards of 21 are wounded after up to three shooters opened fire in a San Bernadino, California center for individuals with developmental disabilities (Update: Two of the suspected shooters have been killed, one of whom is a woman. Authorities identified them as Syed Farook and Tashfeen Malik, the female, and said they had been in a relationship. Farook was a U.S. citizen and an employee of the of the San Barnardino County Health Department. Further details about Malik are not yet known.) That shooting took place just days after the shooting at Planned Parenthood of Colorado Springs. This is what America has become.

If you have school-aged kids, they most likely participate in lockdown drills at school, a tragic throwback to the "duck and cover" drills our parents lived through in their school days. Elementary schools try to shield kids from the horrifying truth; some schools tell the kids that the reason they practice turning off the lights and hiding in their cubbies is "in case something dangerous gets inside the school, like a wild animal." I almost cried when my son came home from kindergarten to tell me about his first drill.

But what about grownups? If you work in an office, you probably have fire drills every now and then, but I'm willing to bet you don't do lockdown drills. Do you know what to do if you ever find yourself in an active shooter scenario? The FBI's Critical Incident Response Group recommends a (frankly, disturbing) educational video created by the City of Houston called "RUN. HIDE. FIGHT." It contains a reenactment of a mass shooting in an office, so if you don't want to watch it, I don't blame you. I'll give you the highlights if you'd prefer to keep scrolling.

Running is obviously the ideal choice. If you can get out, do it. The video encourages you to bring people with you if you can, but don't let them slow you down. If someone insists on hiding under their desk, or going back for their wallet, leave them behind. You did your best, but it's time to take care of yourself. They also make a great point that once you're out, you should make sure that no unsuspecting people enter the area. Then, of course, call 911.

If you can't get out, you'll need to hide. Your best bet is a room with a locking door. If that's not possible, barricade the door as best as you can. If you can't get to another room, try to hide behind a large object, preferably one that will not only conceal you, but provide protection from gunfire. Think a photocopier rather than a flimsy cubicle wall. Turn off the lights, silence your phone, and here's something you might not have considered: turn off the vibrate function, too. It's not really silent if it's vibrating, and if nobody else is making a sound, the shooter might be able to hear it.

Fighting should only be used as a last resort, of course. Try to improvise weapons (the video shows actors using a metal chair and a fire extinguisher). Commit to taking the shooter down. This is your life, and the lives of others, that we're talking about.

Once law enforcement arrives, it's important to know how to let them do their jobs. The first to arrive are their to apprehend the shooter. They're not there to evacuate hostages or tend to injured people, so stay out of their way and know that help will be there soon. Always keep your hands visible, and avoid pointing or shouting. Follow their instructions; they're trained professionals.

I truly hope that none of us ever needs to put these tips into practice.