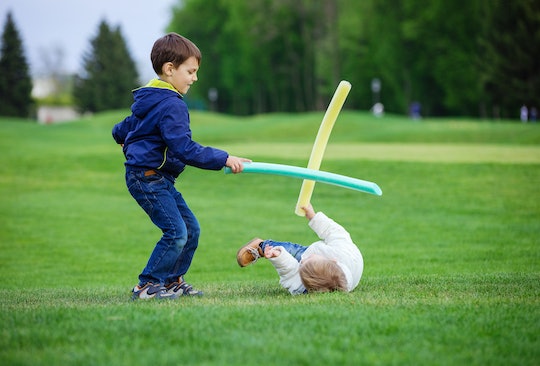 We had just joined a new playgroup and were attending a playdate at the home of one of the families, when something caught the eye of my 10-month-old daughter. It was a colorful football, and it was in the hands of a boy a few years older. As she reached her pudgy hands out, he got right up in her face and screamed, "No! Mine!" I was horrified. I've since realized that not all children are going to be as nice as I'd like them to be, so I've developed a few different responses that I utilize when other kids are jerks to my own.

The strategy I employ depends on the unique situation, of course, as well as the offense and the offender. Still, I've found that one of the following usually does the trick:

Ignore. When it comes to parenting methods, I'm a big fan of Love and Logic. It's an older approach, but one of the central tenets is that parents do not take ownership of their children's problems. You give kids the opportunity to solve them on their own. So if another kid is being mean to mine, and no one is in immediate danger, I very well might pretend I didn't see it happen. Have you ever noticed that if you don't react to your kid falling down, they don't cry? I think this is similar. Maybe it won't be that big a deal to my kid, and she'll just move on. Perhaps I'll get to see her stand up for herself. If things get hairy, I can always move on to another type of response, but feigned obliviousness is a good starting place.

Sympathize. Again, this option keeps the responsibility of solving the problem squarely on the individual whose issue it is: my daughter. That doesn't mean I have to be unfeeling about it, though. Sometimes, (in fact, probably most of the time) a child just needs to hear that you're sorry for what happened and that what the other kid did wasn't very nice. They need validation, because in many of these situations they're feeling something they've never felt before. And as we try to help our children navigate these new and often confusing, frustrating, and even painful feelings, we need to remind them that those feelings are, first and foremost, valid.

I also encourage my child to say "no" or "stop." In my opinion, it's empowering without being rude and completely within her vocabulary wheelhouse.

At a recent playdate, my daughter was patiently waiting her turn to ride in a car. When the little girl using it exited, and realized someone else wanted it, she got right back in. I mean, I was even holding the door open for my daughter (I wasn't trying to be a helicopter parent, but the door had a latch that she couldn't manage.) I assured my daughter that what happened wasn't fair, and I was relieved when the mom came out to deal with it.

Suggest. Again, I'm not leaving my daughter completely to her own devices. She's only 2.5, so she doesn't have much lived experience from which to draw. I may decide that she needs to handle the situation herself, but I can absolutely give her ideas for how to do that. If another child takes a toy from her, I might recommend politely asking for it back or finding something else to play with. If the behavior is more aggressive, I might propose going elsewhere and playing with other children. I also encourage my child to say "no" or "stop." In my opinion, it's empowering without being rude and completely within her vocabulary wheelhouse.

When someone tells me my kid was naughty, it feels like a poor reflection on my parenting and, in a way, an allegation levied against the type of mother I am.

When she gets older and more communicative, giving her options will provide us with a great opportunity to debrief about how what she chose worked out for her and what she might do next time. But, for now, arming my child with simple, age-appropriate tools to defuse a situation is a great way to make sure mean behavior doesn't turn into potentially violent behavior.

Report. You have to tread a little carefully here. Some parents are hyper-sensitive to allegations about the behavior of their "perfect" children and will jump all over you if you confront them. I get it. When someone tells me my kid was naughty, it feels like a poor reflection on my parenting and, in a way, an allegation levied against the type of mother I am. But I know my child isn't always an innocent party, because children are flawed human beings. You know, like us adults.

I will also get involved if the child is significantly older than mine, because they should know better and can understand and, hopefully, be reasoned with.

Some parents will have reactions that might seem disproportionate to the offense, and you'll regret ever saying anything, too. I usually reserve this option for when I know the parent personally. When I approach mom or dad, I try to do so in the most neutral and non-judgmental way possible. If I can accomplish that task, in my experience, those parents are right on it, and willing to rectify the situation as quickly as I am.

Intervene. I spent 13 years herding cats in an elementary classroom, and I am not above a firm "knock it off" in my best teacher voice. This, however, is the nuclear option. I'm most likely to apply it when my child has been hurt or the situation is heading that way. I will also get involved if the child is significantly older than mine, because they should know better and can understand and, hopefully, be reasoned with. I'm not mean or vindictive, and I don't think it's my place to give a consequence, but this mama bear will absolutely tell another kid to cease and desist.

I'm under no illusions that my child is some kind of angel. I know that assholery is not relegated to other people's children. I mean, just the other day, my daughter attempted to run her 18-month-old cousin over with her y-bike. The thing is, knowing that my kid can be a jerk, too, makes me think about how I'd want other parents to react to her, and that informs my own response in similar situations. And if I do my job in keeping my own kid in line (as much as I can, because I can't see everything or be everywhere), I can save another already overwhelmed mom from having to consider any of the above.