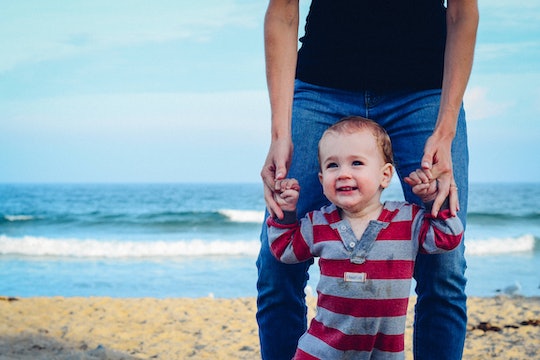 Before I became a parent, I assumed I knew all there was to know about parenting. When speaking about my theoretical children of the future, I would tell people that kids were parent-proof; that parents really didn't have to hover over them every hour of every day; that kids would would be just fine without their parents' constant attention. Then I had kids and realized that my perception was completely skewed. I'm now experiencing the stages of not planning to helicopter parent, but helicopter parenting anyway because, wow, kids are scary you guys.

I didn't practice attachment parenting (at least I don't think I did) but rather practiced what I endearingly call the "just wing it" method of parenting. For the most part I've just been figuring things out as I go and along the way. I don't stress over parenting studies or articles, and I don't lose too much sleep at night worrying about gluten or GMOs. I have, however, become a bit of a "hovering mom" now that my boys are toddlers, despite my best efforts not to.

I grew up in the country, where the woods were my playground. I once caught a snake in the grass and released it in a creek when I was maybe ten, and acted like it was no big deal. I spent every day climbing trees and running free, and it was amazing. When I found out that I was going to become a mom myself, I wanted the same for my boys. I wanted to give them the room they needed to grow and explore and discover their own way in the world, but then I realized how damn scary the world actually is and, well, now I'm dancing a fine line between being a cautious mom and being a helicopter mom. Don't judge me.

More Like This
40 Valentine's Day Outfits Your Girls Will Adore Showing Off This Season
Viral Hives In Children: What Doctors Want You To Know
A Parent’s Guide To Stomach Pain In Kids
Winter Travel Tips For Families