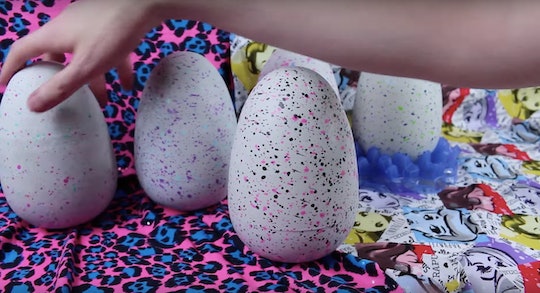 Your kid has been begging for one of those Hatchimal toys since 2016, and you finally got your hands on one. Little Ruby eagerly tears open the packaging and starts “loving” the egg, trying to get it to hatch, and to your horror, nothing happens. Now, before you have a mental breakdown — because you looked for so long and had to fight that lady in Target to get your hands on the last one — here’s how to return your Hatchimal if it’s not hatching, as well as some tips and tricks to see if you can get it to work before having to return it. Apparently, when these toys first came out back in 2016, there were some issues, to put it lightly, with the eggs not hatching, and it was a customer service nightmare for SpinMaster, the company that created and manufactures Hatchimals.

Obviously, if it’s just not hatching, you can take the Hatchimal back to the store where you purchased it from to either exchange it, or get a refund. And if you purchased it at one of these stores, including Target, Walmart, Kohl’s, or Costco, you don’t even need your receipt. However before trekking back to the store, you may want to try a few tips and tricks to see if you can get it working.

Remember, it takes about 25 minutes before the eggs start to hatch, and the entire process can take as long as 40 minutes, according to the Hatchimals website. You also have to make sure your Hatchimal “knows you’re there” and watching for it to continue to hatch. However, according to the Hatchimals support page, if your Hatchimal has stopped pecking, and is not making any sounds at all, remove the key locks from the bottom of the egg. This is called the “Konami Code,” and is a secret method to start the hatching process.

And sometimes, the Hatchimal may need to take a break in the form of a nap. Have your kid turn the egg upside down slowly and hold it there for 15 seconds. Then place the egg on a flat surface and wait for a few more seconds. It should be snoring before you pick it up to try again. You can also shake the mess out of it after letting it “rest” to see if that activates it. Kind of like the banging your hand on top of the television to make it work trick when they were big boxes and not flat screens.

The website also suggested holding the base of the egg with one hand and twisting the egg clockwise and counterclockwise quickly with your wrist, rotating the hatchimal inside of the egg. If you can find the Hatchimal’s beak, you can give the egg “a gentle squeeze to push your Hatchimal’s beak away from the shell.” It also suggested breaking away a small piece of the shell to “give your Hatchimal a little extra help.”

And when all else fails, try doing the typical cable company troubleshooting trick of turning the device off and then on again by removing the batteries. Or you can cut it open, like this YouTuber did, however that may be a little traumatic for your kids and not quite as fun as watching it hatch as intended.

If none of these tricks work, and you just can’t make it back to the store where you purchased the toy from, call their customer service line, or email them. The phone lines are open Monday through Friday from 9 a.m. to 6:30 p.m. However, because of the holidays, they will be open from 9 a.m. to 5 p.m. on Dec. 30 and 31. Good luck and happy hatching, hopefully.