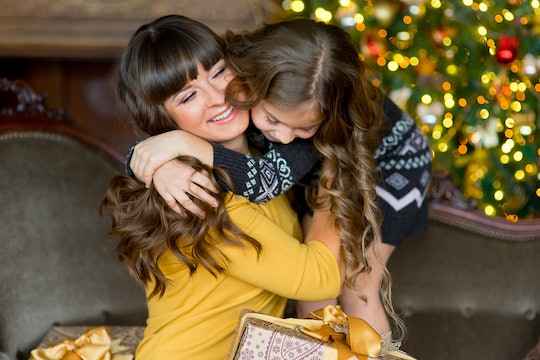 How To Set Limits On Holiday Spending With Your Ex, Because This Isn't A Contest

If I thought co-parenting with my ex during the holidays was hard when we were married, it's because I had no idea how hard it would be after our divorce. I learned firsthand how important it is to agree (and often compromise) about holiday gift-giving. Otherwise, it can feel like a contest to win your kids' affection, which is not fair to them (or to either of you). Fortunately, there are ways to plan in advance, and set rules with your ex on holiday spending, to make sure everyone (and their budgets) makes it through the season relatively unscathed.

As Dr. Jann Blackstone author of Ex-Etiquette for Parents: Good Behavior After Divorce and Separation, wrote on exetiquette.com, the first rule of co-parenting with your ex is to always put your kids first. Holiday gifting should be no exception. So, before you buy something big, ask yourself why, and be honest. It should never be about outdoing your ex. As Robert E. Emery Ph.D., author of Divorced With Children, explained in Psychology Today, it's easy to fall into the trap of trying to overcompensate during the holidays or to compete with your ex for your kids' affection. This can send your kids the wrong message about the holidays. Instead, he recommended treating your co-parenting ex more like a business partner than someone with whom you had a personal relationship. Setting a budget for the holidays doesn't have to be a big deal, if you take the emotions out of the planning process.

As Blackstone pointed out, it's easy to view your ex as the enemy when they can (and should be) a part of your co-parenting team. You should try to make decisions with them, rather than against them. So, when it comes to gift giving, be honest about what you're planning to buy, and what you can afford. While she acknowledges it isn't always easy to get along with your ex, especially during the already stressful holiday season, empathy and compromise should be the top two tools in your co-parenting toolbox.

In other words, if your ex wants to buy your kids something specific, you should hear them out, rather than holding a grudge or saying, "no," just because you can. "Compromise is the great equalizer and it begins with listening to your ex’s concerns," wrote Blackstone. "The simple act of listening validates both parties and it’s much easier to find common ground, the basis for compromise, when both sides feel heard."

Emery agreed, suggesting that co-parenting exes try to take the emotions of past wrongs, or bad feelings about each other out of the equation, viewing your relationship like a business, and holiday planning an agenda item. As Emery wrote, "your relationship is formal, structured, relatively uninvolved, governed by clear rules of behavior, polite but not overly friendly. You politely return a business call. You do not vent, or call late on Saturday night."

To plan for holiday spending, you should keep things simple, straightforward, and most importantly, short. As Emery writes, "Ten minutes now can save days (or weeks) of fuming later." Anything beyond ten minutes is probably veering into contentious territory.

Edward Kruk, Ph.D., an Associate Professor of Social Work at the University of British Columbia, noted in Psychology Today that it's important to agree in advance about who is buying what and how much you will spend to avoid both inequity (when one parent has a different financial situation) and the possibility of getting duplicate gifts.

Another idea, Krug suggested, is to give joint gifts with your ex and take any competition or comparison out of the equation. Ideally, the holidays might even provide an opportunity for divorced parents to "start learning to communicate more effectively in the interests of their children, and setting the tone for compromising and making joint decisions."

Above all, you need to remember that the holidays are not a competition for your kids' love, as James Lehman, MSW, author of Two Parents One Plan wrote for Empoweringparents.com. Set a spending limit in advance, and stick with it, even if your ex doesn't. You can't control what your ex does at their house — during the holidays or any other time. Try to make peace with that reality, and err on the side of being mature, for your kids' sake.