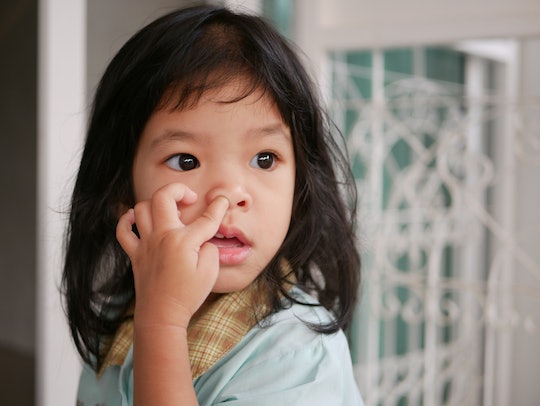 I'm Sorry To Tell You, But Apparently It's *Good* For Your Kids To Eat Their Boogers

This kid in my first grade class was a renowned booger eater. I still remember him for that — once he got a good one, he’d pop it in his mouth. Sound familiar at your house? You may be wondering how to stop your child from eating boogers so your child isn’t remembered by their fourth grade classmates for their booger eating habits. But the more likely reason you want them to cut it out already is because it’s really gross and it has to be making them sick, right?

Well unfortunately — or fortunately? — according to ChildrensMD, kids picking their noses and eating it may actually be good for them. “Various scientists have long hypothesized that eating mucus from your own nose is an effective method of strengthening the immune system. Nasal secretions trap germs and other toxins that are in the air so that they don't enter our lungs,” the website noted. Insert barfing emoji here. Plus boogers can be pretty tasty to kids, a Romper article reported. Apparently boogers are like “Cheetos that live up your nose” because they are “slightly sweet, slightly salty, a little crunchy …” Yum...

Even though it may potentially be “good” for them and they may taste pretty good, if you’re sick of witnessing your child shovel their boogers into their mouths, there is a way to stop them. According to Healthline, it's not impossible to stop, but it is difficult. The website suggested "identifying underlying causes," like allergies, which would lead to a runny or stuffy nose, which leads to nose picking and then leads to booger eating. Try children's Claritin or Zyrtec, after discussing with your pediatrician first.

To keep those boogers from becoming hard and irresistible to pick, Healthline also suggested having your child use saline nose drops and cool-air humidifiers. They can't pick and eat liquid — I don't think? Additionally, Dr. Lisa Lewis, board certified pediatrician and author of Feed the Baby Hummus, Pediatrician-Backed Secrets From Cultures Around The World, tells Romper "An effective way to reduce and possibly eliminate booger eating is to use an emollient, such as Vaseline, in the nose twice daily. Use a clean finger, and apply a dime sized dab of Vaseline at the entrance of each nostril. Gently pinch the nose. Any Vaseline that comes out should be reinserted. Do not stick your finger or a Q-tip in the nose, or you are likely to get resistance the next time you try. Applying an emollient will moisten the dry boogers and keep the child from picking the nose."

Also plan to have loads of tissues available all around your home so maybe your kid will be more prone to using those than picking their nose with their finger. They even make some Kleenex boxes with cartoon characters like Mickey Mouse on them, making using a tissue even more enticing. Lewis adds that you should praise the child when the tissue is used instead of their finger to reinforce the positive behavior. "I wouldn't recommend reminding the child constantly. A child is likely to become more focused on nose picking and booger eating if the topic is discussed redundantly," she says.

Another way to help keep your kid from picking their nose and eating their boogers is to redirect them into doing another behavior, Lewis suggests. Cafe Mom says one distraction and redirection could be grabbing your toddler's hands and start doing "an enthusiastic Pat-a-Cake rendition" when you see them going for the gold.

One common theme I found in most of the research on this topic is that the most common reason kids pick their noses and then eat their boogers is because they may not have learned alternative methods of releasing the hard snot in their noses. Teaching them good hygiene habits start early, and you may be able to prevent them from having this habit in the first place.

So if you don't want your kid to be the nose picking and booger eating kid in their class — or you just think it's gross — try figuring out if there's an underlying problem. Keep Kleenex nearby at all times, keep the mucus moist by using Vaseline, saline drops or a cool-air humidifier, or distract your child. Eventually they'll give up the habit.