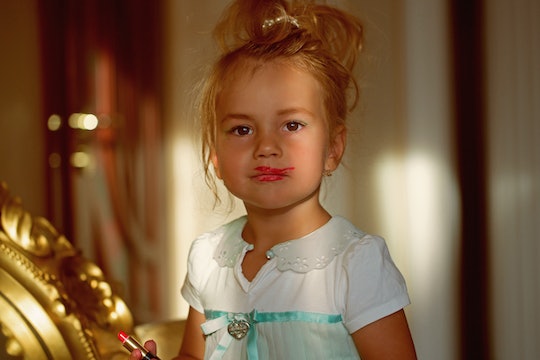 How To Talk To Your Daughter About Makeup, According To Two Experts

Makeup is a part of many of our daily routines, and it is certainly part of our daughters' lives. From pharmacy displays to media to the proliferation of YouTube tutorials on the subject, makeup is everywhere. But this ubiquitous serious of paints, creams, pencils, and powders can bring with it a tremendous amount of baggage and pressure to conform to what we've been sold as the "ideal" image of beauty and femininity. So learning how to talk to your daughter about makeup, even if it's not a staple in your life, is important.

Romper spoke to counselor Dr. Nancy Sherman of Bradley University and Dr. Fran Walfish, family and relationship psychotherapist and author of The Self-Aware Parent, to help parents figure out what to say.

Sometimes the hardest part of any "parenting talk" is figuring out when to start the dialogue. Good news! According to both doctors, this is a subject you don't have to dive into proactively. Instead, you should let your daughter bring it up to you. "The child should take the lead, not the parents," Dr. Walfish says.

That doesn't let us parents off the hook entirely, though. While Dr. Sherman, who spoke to Romper by email, agrees that this discussion should be child-led, parents should think about their own relationship with cosmetics. "Parents should be clear with themselves about why they do or don't wear makeup," Dr. Sherman says. "And perhaps examine their reasons before it becomes a topic of discussion."

Probing our own motivations and methods helps us establish a good frame of mind to have a clear, meaningful discussion with our daughters. It will also help us make sure that our child's first exposure to makeup is a positive one, and not a continuation of what can be our personal, complicated relationship with it.

"Makeup use is very typical for children playing dress up," Dr. Sherman says. "And they are dressing up with what has been modeled for them by parents, so parents need to be very aware of the model they are presenting to their children."

Parents should never say anything that implies that how the child looks without makeup is in any way problematic or that they look better with makeup.

It can be hard to believe when it seems like the people our kids are most imitating are their friends at school or cartoon characters (thanks, Pepa, now she thinks she's British), but never underestimate your tremendous, ongoing influence on your children and how they see the world and themselves in it. This is why I actually make a particular point of saying "I want to go do my makeup" instead of "I have to do my makeup." It's a slight difference, but I want to send the message that, even for an adult, makeup is optional.

Among girls who do show an interest in makeup, the "when" is variable depending on the child's personality and even their extracurricular activities. Dr. Sherman points out that many girls who participate in dance will be asked to wear makeup for recitals and, as a result, may develop an interest based on their experience. While young girls are generally most interested in makeup as a "dress up" item, once many reach middle school, parents might begin to expect the makeup discussions to begin in earnest. The decision to grant or deny permission, and/or any limitations on where or what kind of makeup is allowed is entirely personal and will differ from family to family.

Any discussion that has so much to do with gender and appearance (themselves horribly co-mingled, complicated issues) is bound to be prone to a lot of social and personal baggage. But take a deep breath, a good look in the mirror (reapply some lipstick if you want, or wipe it off if you'd prefer!) and let your child know that makeup is for fun, and if they don't think it's fun they don't have wear it.