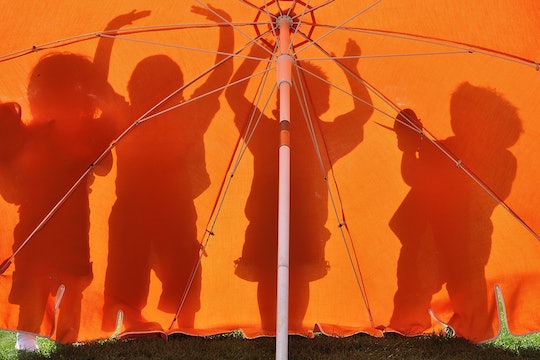 For whatever reason, “gender” is a scary word to a lot of people. Then if you bring up the idea of talking to a child about gender, people really get all kinds of weird. They act like talking to a kid about the concept of gender is as awkward as talking to them about the sex they walked in on you having with their father. What do you say? How young is too young? What if they’re confused? How does one even go about talking to a young child about gender?

I think that a lot of parents worry that they’ll actually give their child some sort of gender identity issue by talking about the concept of gender with their kids, but that’s not actually the case. Your child is who they are, and as parents, our job is to help them be the fullest, most authentic version of themselves they can be. Gender Spectrum notes that there are many genders beyond just male and female, and explains that “a child’s gender is not what others tell them, but who they know themselves to be.”

There are a lot of reasons to talk to your kid about gender when they’re little beyond their own personal understanding and conceptualization. Talking about gender outside of binary identities and as a social construct can actually help your child be more accepting of other people’s gender identities, and helps your child be a more tolerant and loving human.

Start small, with age appropriate conversations. These conversations can be about dismantling gender stereotypes (“Boys can wear pink if they want.”) or introducing them to pronoun options (“Some people use ‘she,’ some people use ‘he,’ and some people use ‘they.’ Everyone gets to pick the pronoun that they like. Which one do you like?”). The Human Rights Campaign’s Welcoming Schools program has a lot of great resources on how to talk to kids, and what to say when kids make statements that uphold gender norms or stereotypes.

In a day and age when trans teens are committing suicide at alarming rates, the stakes are high for acceptance of gender-expansive children. Children are dying as a result of bullying they experience due to their gender identity, or because they’ve internalized shame about who they are. We have to do better.

The thing about kids is that they only know what we tell them. And when we don’t make something a big deal, they won’t either. If we talk about gender like it’s an acceptable conversation to have, chances are that they’ll carry that attitude with them into the world — and that’s a good thing. Here’s to a generation of kids that is more inclusive, educated, and open-minded about gender than ours is.