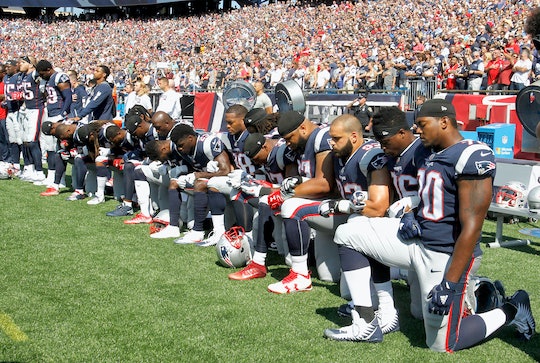 How To Talk To Your Kids About "Take A Knee," & Why You Should

Last year, quarterback Colin Kaepernick made a fateful decision to kneel during the national anthem to protest police brutality against people of color. Soon after, other NFL players, managers, and owners joined Kaepernick in taking a knee, transforming a peaceful act of dissent into a nationwide "Take A Knee" movement. With the NFL protests making headlines as of late, you may be wondering how to talk to your kids about "Take-A-Knee." If nothing else, you should be open and honest.

Before you sit your kid down to talk, go over the details of the debate for yourself. Start with the events of the last week. Despite starting a year ago, the NFL protests began to dominate the news after President Donald Trump called any player who protests the national anthem a "son of a bitch." At last week's rally for Alabama Republican Sen. Luther Strange, Trump said, according to ThinkProgress:

Wouldn’t you love to see one of these NFL owners, when somebody disrespects our flag, to say, ‘Get that son of a b*tch off the field right now. Out! He’s fired. He’s fired!’

Trump has been heavily criticized for his rant on "Take A Knee" — and with good reason. What he said about the peaceful NFL protests was both misinformed and vulgar. When you speak to your child or children about "Take A Knee," there are three points to keep in mind.

First, although the First Amendment doesn't apply to private employers such as the NFL, players still have the right to protest injustice. In fact, peaceful dissent is at the core of American democracy, which is why the First Amendment of the U.S. Constitution secures the rights of all Americans to "the freedom of speech, or of the press; or the right of the people peaceably to assemble, and to petition the Government for a redress of grievances."

Second, Trump ends up picking and choosing what's disrespectful to the American flag. According to the Huffington Post, the federal flag code has a whole list of rules that Americans violate everyday, like wearing MAGA caps with embroidered flags or using paper plates with a flag design. As the saying goes, "He who cast the first stone..."

Finally, you can't ignore the racial implications of Trump's statement. Last month, white supremacists and neo-Nazis descended upon Charlottesville, Virginia, to protest the removal of Confederate statutes. The rally soon turned deadly due to violence perpetrated by white nationalists. Yet, in his response to the bloody events, Trump regarded white supremacists and neo-Nazis as "very fine people," according to the Los Angeles Times. But the NFL players taking a knee during the national anthem — the majority of whom are black — are "sons of b*tches" for peacefully exercising their right to free speech. When taken side-by-side, those statements reveal which group of people Trump respects and supports, and which group he feels doesn't deserve any rights.

Of course, depending on your child's age, these three points may be too complex for them to understand. But you should keep them in the back of your mind when you sit your kids down to talk about why NFL players are taking a stand by taking a knee.

And tackling complex topics with your child doesn't need to be as difficult as it would seem on the surface. The Positive Coaching Alliance, a national nonprofit focused on positive, character-building youth sports environments, suggests three strategies to incorporate when discussing "Take A Knee."

The "Take A Knee" protest is not an easy topic to tackle, but it's one that you should discuss with your kid if you can. Don't worry about having all of the answers. Being open, honest, and compassionate will go a long way instead.