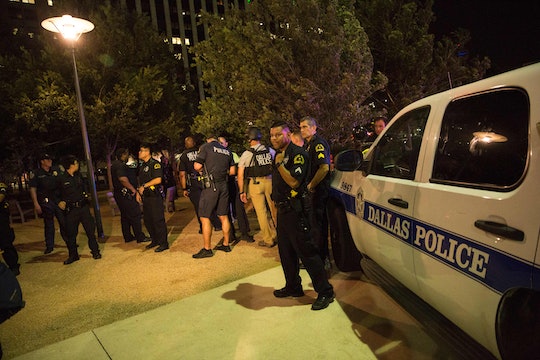 How To Talk To Your Kids About The Dallas Shooting, Because It Shouldn't Be Ignored

It has been a week full of violence, killing, protest and racial tension, and after the shooting of Minnesota man Philando Castile Wednesday, it didn't seem like it could get much worse. But then five Dallas police officers were shot and killed by snipers Thursday following a peaceful protest in the city — something President Obama has since called a "vicious, calculated, despicable attack on law enforcement," according to CNN. With coverage of the attack all over the news and social media, it's now almost impossible to shield the details from children, who are likely going to have lots of questions and concerns about what has been happening. If you're wondering how to talk to your kids about the Dallas shooting, here are some things to keep in mind.

According to Dr. Tina Cheng, professor of pediatrics at the Johns Hopkins University School of Medicine and director of the Division of General Pediatrics and Adolescent Medicine for Johns Hopkins, talking about shootings and other tragic events is something parents absolutely should not shy away from. Children are often aware of more than their parents would perhaps like them to be in the aftermath of such terrible events, but initiating a dialogue can go a long way to easing some of the fears and anxieties that children can develop — things which can have lasting effects on their health and well-being. As Cheng noted following the mass shooting in Orlando in June,

Acute and chronic stress in childhood can precipitate the development of a range of health problems at a young age and later in life, including depression, substance abuse and heart disease. Thus, paying attention to the emotional needs of our children in times of crisis, and at all times, should remain our utmost priority.

Discussing what is often senseless and horrific violence with your children might feel counterintuitive when what you're trying to do is comfort them and help them to feel safe, but according to Cheng, avoiding talking about it actually exacerbates the anxiety and fear they already feel. "Open and honest discussion is...important because a child’s fears are often magnified and worse than reality," Cheng said. "Find out how much a child knows and what his or her greatest concerns are, then contextualize the situation."

Parents can start out with some simple questions — "have you heard about what happened in Dallas?" or even just "are you worried about anything?" — and then see how they respond. Although it's of course important to keep your answers age-appropriate, it's just as important to be honest, as children need to know that they can trust the adults in their lives. And while the impulse may be to minimize the situation or downplay your own fears, again, honesty is helpful here, too. By letting your child know that you are upset about what is happening and by what you are hearing on the news, it gives them space to know that their feelings are OK as well.

According to Dr. Glenn Saxe, chairman of the department of child and adolescent psychiatry at NYU's Langone Medical Center, an important part of discussing traumatic events with your children is having the opportunity to reassure them and remind them that they are safe. Saxe told CNN,

The first kind of thought and feeling is [children will have is], 'Am I safe? Are people close to me safe? Will something happen? Will people I depend on protect me?'

Of course, the reality is that no parent can ever guarantee their child that nothing bad will ever happen, but you can let your children know that you are doing everything you can to protect them, and so are all the other trusted adults in their lives, like their teachers at school, for example. And as was certainly the case with the Dallas shooting, police officers are there to keep the public safe (though that discussion is clearly a complex one, given what happened to Alton Sterling and Philando Castile earlier this week).

According to Melissa Brymer, director of the terrorism and disaster programs at the National Center for Child Traumatic Stress at UCLA, when you talk to your children can be as important as what you actually say. According to NBC News, Brymer said that it's a good idea to talk at a time "when you can focus on your child’s verbal and nonverbal responses," such as after dinner, or whenever you are both able to be plugged into the conversation. One time you should definitely not discuss the Dallas shooting with your kids? Right before bed (aka, a prime time for anxiety and worry to spiral out of control).

And as much as parents should be mindful of being honest with their children, according to Dr. Joe Taravella, supervisor of pediatric psychology at NYU Langone Medical Center's Rusk Rehabilitation, it's also important to be honest with themselves. After all, children are very good at picking up on what Taravella described to CNN as "the emotional temperature in the home," so if we are hiding how we really feel, it can send a clear message to children that we don't actually mean it when we tell them they don't have to worry. Taravella said, "we are our children's role models, so we should be leading by example at all times and when we're sad," though ending on a positive note and reminding your child that you are there for them is always a good idea.

But given the extremely difficult, and often graphic, nature of what is often shown on television, monitoring children's media exposure is valuable, especially with young children. As Cheng noted,

Young children are better off not watching the news. Ideally, older children should watch the news with a parent or a caregiver. Doing so gives you a chance to discuss what is happening, put it in context for the child and gauge how the child feels about it.

Harold Koplewicz of the Child Mind Institute agrees, according to TIME, and noted that "children younger than five tend to confuse facts with fears," so limiting access to these stories in the first place is wise.

For parents of older children, Koplewicz explained that they shouldn't be concerned if their children seem indifferent to the event, or if they don't react the way they are expecting them to:

By maintaining a sense of openness, honesty and support, parents will likely be able to mitigate some of the more damaging effects of new stories about mass shootings and other traumatic events. But, according to Cheng, it's also important to keep an eye out for signs that the Dallas shooting has hit your child particularly hard, and might need some additional support. While "crying apprehension and asking a lot of questions," are normal and common, things like, unusual irritability, excessive crankiness, hypervigilance or jumpiness, loss of appetite, nightmares and disturbed sleep," can be red flags, suggesting that a child is struggling.

Having to explain heartbreaking events like the Dallas shooting to their children isn't something that anyone looks forward to as a parent. But by being as open, loving, and reassuring as possible, children can learn that, although the world can sometimes be a scary place, they don't have to be afraid.