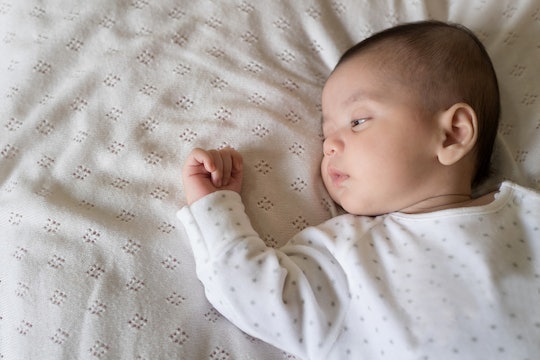 Here's What To Look For If You Think Your Baby's Lethargic

My son had a UTI when he was a little shy of 3 months old, so he was admitted to the hospital overnight for antibiotics after two ER visits. When we were finally able to bring him home, on top of being scared out of our minds and stressed with our new baby being in the hospital, we were told to keep looking out for signs of lethargy in him, and if we did see signs, to bring him back immediately. I kept asking how to tell if your baby is lethargic, because I couldn’t tell the difference from just being exhausted after being at the hospital for a couple of days. When he did have a high fever (which prompted the ER visit), he seemed very out of sorts, really tired, and didn’t move a lot. Was that lethargy? I didn’t want to miss this crucial sign there was something seriously wrong, but it can be hard to tell. According to pediatricians, there is a definite difference, and it’s something really important to look out for.

According to Dr. Danelle Fisher, FAAP, vice chair of pediatrics at Providence Saint John’s Health Center in Santa Monica, California, if your baby is truly lethargic, they’re difficult to rouse. “Babies who are in a deep sleep or sleepy will respond to stimulus, whereas lethargic babies will not,” she explains to Romper. “Lethargy is not the same as low energy, which is what 99 percent of parents describe as ‘lethargy.'" She adds that true lethargy is actually a dangerous state, and could be due to many different reasons.

Dr. Gina Posner, a pediatrician at MemorialCare Orange Coast Medical Center in Fountain Valley, California, agrees, and tells Romper, “If your child has been sick and starts being extremely sleepy and not moving much or crying, that could be lethargy.” The pediatrician at the ER where we took my son for his high fevers had a similar explanation, but also gave us a test to determine if our baby was just groggy or truly lethargic. You just lift up your baby's arm and let go. If it falls down to their side limply, quickly, and heavily, that’s a pretty good indicator that they're lethargic and not controlling their arm.

“If your baby is lethargic, it is dangerous. We never use that word lightly — we are all taught that lethargy should be treated as a medical emergency," Posner says. "Lethargy typically comes along with an illness." But Fisher is adamant that if your baby just seems tired, has low energy, or just isn't acting like themselves, it's not necessarily the same as lethargy.

Both doctors agree that no matter what age, lethargy is always dangerous and you should immediately take your baby to the ER if you notice it. “Typically your baby only gets true lethargy when they’re sick or of their hormone levels are off, but that’s more commonly found in the newborn stage,” says Posner.

If your baby just seems tired or has low energy, just keep a close eye on them. You should also call the pediatrician if it lasts for a while, or is accompanied by a fever or other sick symptoms. If they’ve been sick, and don't seem to be moving much, that's true lethargy and you should take your baby to the hospital immediately. As always, if you’re unsure, call and ask your doctor.