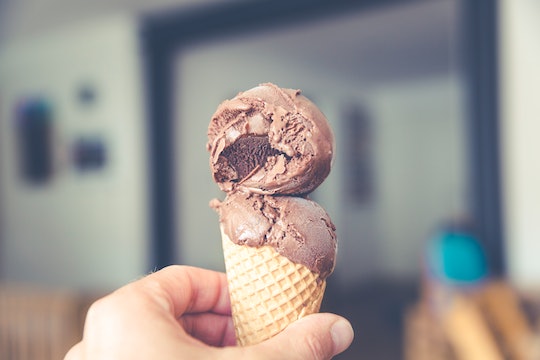 As much as you want a delicious summer treat probably right this minute, if you buy Comfy Cow ice cream, you definitely want to check your freezer. This week, the company voluntarily recalled batches of certain flavors for a possible E. coli bacteria contamination, which could make you or your family members sick. Here's how to tell if your Comfy Cow ice cream was recalled: If you bought a pint of Banana Puddin Y’all, Chocolate Squared2, Cookies and Cream, Cow Trax, Double Fold Vanilla, Georgia Butter Pecan, Intense Dark Chocolate, Salted Caramel, or Strawberry Fields Forever between June 13 and July 21, 2017, you should just toss it out, or you can return it to the store for a full refund.

Most of the contaminated product was distributed in Kentucky, Missouri, Indiana, and Tennessee. Romper's request for comment from Comfy Cow was not immediately returned, though the company did issue a statement on Tuesday. Comfy Cow CEO Tim Koons-McGee said:

The Comfy Cow is taking this voluntary precautionary measure in order to ensure complete consumer safety. Our top priority is guaranteeing the safety of all our loyal customers. All of the affected flavors have been removed from our 8 local Louisville area Scoop Shop locations.”

So far, no illnesses have been reported.

The possible contamination was discovered during routine testing in July that found high counts of coliform and E. coli bacteria. Usually E. coli causes diarrhea and dehydration that most people recover from, but it can be deadly. Especially for kids, older people, or anyone with a weaker immune system.

Voluntary recalls like this one happen all the time for all kinds of food products. Although it's worrisome (and kind of a hassle), the good thing to remember is that routine food testing usually catches any traces of of E.coli, or the other common contaminant in processed foods, listeria. Would it be better if the bacterias never popped up? For sure. But it's good to know that testing and the recall system do work to protect consumers.

E. coli bacteria is commonly found in the intestines of livestock and humans. The bacteria are also found in unpasteurized milk and ciders, deli and sandwich cold cuts, as well as cheeses and raw veggies.

It's possible that the ice cream was contaminated by a human or possibly a batch of milk used to whip up the tasty dessert, though it sounds like the spread has been contained by the recall, so there shouldn't be anything to worry about.

So toss out your old Comfy Cow and grab another pint of ice cream — you deserve it for being so vigilant about your product recalls.