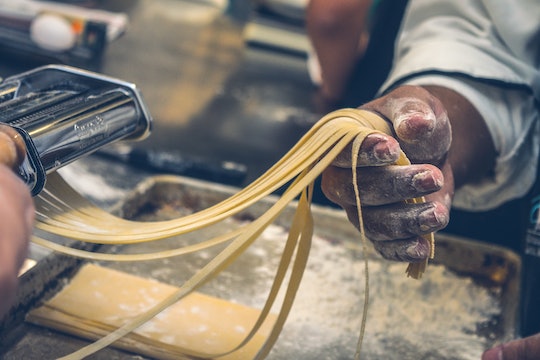 How To Tell If Your Flour Has Been Recalled For Potential E. Coli Contamination

Flour is a widely used powder and staple food product found in the kitchens of many homes. Whether families use flour to bake bread, cakes, dumplings, or homemade pizzas, it's one of those go-to foods that many people always have tucked away in a cupboard, ready to be used if a recipe calls for it. So it's important for the public to know that some brands of flour have recently been recalled due to links to a potential E. coli outbreak. If you're wondering what to do with the flour you have in your cupboard, here's how to tell if your flour has been recalled.

In collaboration with the CDC, General Mills released a statement on Tuesday recalling 10 million pounds of some of its flour brands. The company noted that the recall was "out of an abundance of caution," since no E. coli was found in its food products or manufacturing facility, the statement read. But state and federal authorities have been investigating 38 cases of illnesses caused by a specific type of E. Coli called, E.coli 0121. And half of the individuals who got sick from an E. coli contamination, reported to have eaten homemade food made with flour prior to becoming ill.

The specific General Mills flour brands that have been recalled are: Gold Medal flour, Signature Kitchens flour, and Gold Medal Wondra flour. There's a total of nine flour products listed on the recall list, and identified by UPC codes. Consumers can check the list of affected flour products with the associated UPC codes and "use-by" dates at the General Mills website or at FDA.gov.

In an interview with Good Morning America, Dr. Richard Besser, ABC News' chief health and medical editor and former director at the Center for Disease Control and Prevention, said an E. coli outbreak caused by flour was rare, and something you wouldn't normally see.

Flour is one of those things you would never see. Because flour you eat cooked, and baking, frying is going to kill any germs that happen to be in there. But when you look at how contamination takes place in the kitchen, it's often eating something raw that should be cooked.

Dr. Besser also suggested that accidentally leaving flour on a kitchen counter, for example, could lead to cross-contamination since the flour could contaminate something that's safely eaten raw.

But even if you plan to appropriately cook, or bake your food containing flour – and not consume it raw – General Mills still recommends not using any of the flour products listed above.