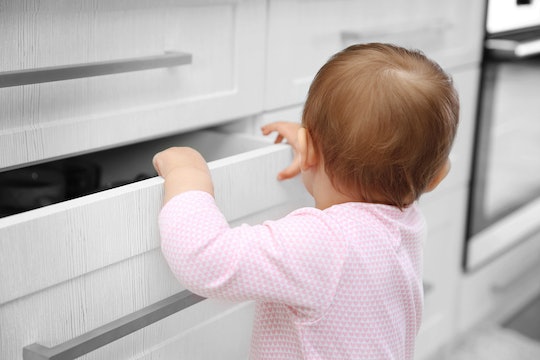 Dressers; they can be tricky. And tippy, especially around small children who can often view a dresser as a jungle gym rather than a boring old place to store clothes. And after child was reportedly injured by one, a recall has been issued for Ameriwood Home dressers over potential tip and entrapment hazards — and you're going to want to make sure you don't have one in your home.

Romper has reached out to Ameriwood Home for comment regarding the reported recall and is awaiting a response.

The Ameriwood Home Mainstays four-drawer chest, which is primarily sold at Walmart, was recalled on Wednesday. Around 1.6 million of these dressers have been sold. According to the U.S. Consumer Product Safety Commission (CPSC), the dressers were recalled because the "chests of drawers are unstable if they are not anchored to the wall, posing serious tip-over and entrapment hazards that can result in death or injuries to children." The CPSC maintains that the dresser, when not anchored to the wall, does not comply with voluntary safety standards and could cause serious problems.

The recalled dressers are distributed out of Tiffin, Ohio throughout the United States and Canada. So far, the CPSC has reported one instance of an injury; the heavy chest of drawers reportedly tipped over and fell on a 4-year-old child.

Given such news, parents and caregivers who bought this four-drawer chest at Walmart between April 2009 and May 2016 will want to double-check to make sure their dressers have not been recalled. And if they were, what to do about it.

If you discover you have one of the recalled dressers, Ameriwood Home issued a statement explaining how to proceed:

Consumers should immediately stop using any recalled chests that are not properly anchored to the wall and place them in an area that children cannot access. A free anchoring kit will be provided that will include a wall anchoring kit and anti-tip feet to stabilize the unit. Ameriwood Home encourages and emphasizes the need for the use of the wall anchors for all chests.

According to Good Housekeeping, there are extra precautions parents can take to prevent dressers (recalled or otherwise) from tipping over on to children. According to the magazine, chief technologist Rachel Rothman explained:

Installing drawer latches on all dresser and bureau drawers to prevent children from climbing and possible subsequent entrapment underneath if furniture tips over. It's best to attach big pieces directly into wall studs with brackets. And be mindful to never place heavy items atop cabinets to avoid them ever falling off.

For those who have purchased one of the Ameriwood Home recalled chest of drawers and would like to request a free anchoring kit or have further questions, you can contact customer service between 8 a.m. to 5 p.m. Eastern Time, Monday through Friday or call them at 1-800-489-3351. Otherwise, you can fill out their online form to request a kit.

If nothing else, simply check the dressers in your home so you can rest easy, because nobody wants a child to be trapped under a tipped chest of drawers.