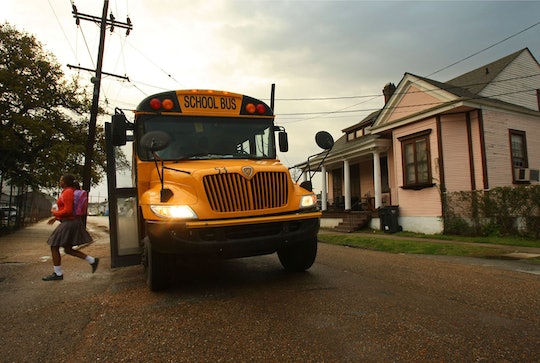 Hurricane Irma — a Category 5 hurricane, which has been reported to be one of the strongest storms ever recorded in the Atlantic — is expected to make landfall as early as Wednesday. While the National Hurricane Center projected that the full force of the storm seems to be heading for the Caribbean (including Puerto Rico and the Virgin Islands), the storm could potentially be headed for the coast of Florida as well. For parents living in areas that could be affected by the storm, here's how to tell if school will be closed because of Irma.

For other schools along the Atlantic coast and in Irma's path, be sure to keep up with the local new for any new developments on the storm and check in with your kid's school directly — by phone or through its website — to learn whether it'll be closed.

Meteorologists are still unsure about whether or not Hurricane Irma will hit North Carolina, which has some residents feeling restless; according to The Charlotte Observer, The National Weather Service is hoping to know more by the weekend. As it stands now, all the people of that state have to go on is a vague "maybe."

As of Tuesday afternoon, Irma was expected to be either near or over Antigua and Barbuda, St. Kitts and Nevis. The storm should move on to Anguilla by late Tuesday, and the British and U.S. Virgin Islands and Puerto Rico on Wednesday. It is the strongest storm on record since 2005's Hurricane Wilma off the coast of Mexico. Michael Brennan of the NHC told CNN that this storm should be taken very seriously:

As of Tuesday morning, the NHC noted:

There is an increasing chance of seeing some impacts from Irma in the Florida Peninsula and the Florida Keys later this week and this weekend.

While it remains uncertain if and when Irma will make landfall in Florida — or in other states along the Atlantic coast — residents aren't taking any chances, especially with the recent chaos of Hurricane Harvey along the southern Gulf Coast so fresh in everyone's minds.

Miami-Dade County officials began plan to begin evacuating residents with special needs on Wednesday; whether there will be other evacuations remains to be seen. The Washington Post reported that the Florida Keys, an area closest to the direct path of Hurricane Irma and home to 80,000 residents, will undergo mandatory evacuations beginning on Wednesday in preparation for the storm.

Stores in the southern Florida have also been besieged with panicked shoppers trying to gather essentials for worst-case scenarios, with essential items like bottled water running out in some cases. Hardware stores, banks, grocery stores, and more are seeing line-ups hours in length. Because at the end of the day, people would rather be safe than sorry.

If you're in Irma's path, play it safe and keep your kids home on Thursday and Friday — and do what you can to prepare for what could be a devastating storm.