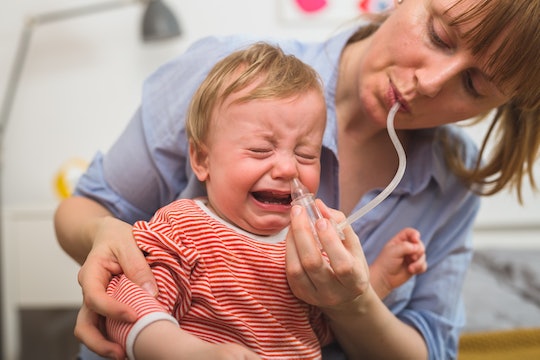 Your 2-year-old toddles into the room and you see it: radioactive green snot is hanging from their nose and getting dangerously close to their top lip. After you shiver in horror and wipe it away, you’re probably wondering how to tell if your toddler has a sinus infection. Well, that green boogie was actually a telltale sign, according to child health experts.

Randy Thornton, M.D., pediatrician at Jacksonville Pediatrics and Wolfson Children’s Hospital of Jacksonville told Romper in an interview that sinus infections definitely happen to little ones, but not as often as all the other sicknesses kids catch at daycare. Straight up colds are much more likely to find their ways into your home.

“The most common things are colds; infants can have eight to 10 colds in their first year of life, and more if they’re in daycare. To escalate into a sinus infection, that’s rare compared to the number of colds they get,” he explains. “Less than 10 percent of colds actually go on to become sinus infections."

If your child seems to come down with sinus infections frequently, Thornton says it may actually be the result of an underlying health concern.

“Sinus infections are just that extension of a cold; they’re the same passageways from the nose and throat up into the sinuses, and like any area up there, germs can get in there and they can get infected,” he says. “Some kids are more prone to them due to their anatomy, and some people with immune problems get them more frequently. We work up kids who get them over and over again to find out if there’s something anatomical or an immune deficiency going on. We’ll usually refer these kids to an ENT or immunologist.”

So, what should parents be on the lookout for? If your toddler is wiping away at that *delightful* neon green or yellow mucus, that usually means their cold has leveled up. The American Academy of Otolaryngology says signs of a sinus infection in children also include a cold lasting more than 10 to 14 days; sore throat, nausea, or bad breath resulting from postnasal drip; and swelling around the eyes.

“The classic sign is this cloudy, yellow-green discharge. If it stays green or yellow for nine or 10 days, it’s most likely a sinus infection,” says Thornton. “Usually there’s also a fever, or the child is just not getting better. A cold would be better within a week, and the cloudy discharge would clear. Pain in the head, cheeks, and around the upper molars are classic signs they have a sinus infection. And, of course, coughing, congestion, and fever. We would treat with antibiotics.”

Of course, you don’t have to wait through nine to 10 days of oddly colorful boogers to take your little one to the pediatrician’s office. Pay more attention to that body temperature.

“If you get a fever that lingers more than four days, we ought to see them, and if they’re acting ill, we really ought to see them,” says Thornton. “Most colds should start getting better after a week. If at any point you’re worried about them, we want to take a look.”