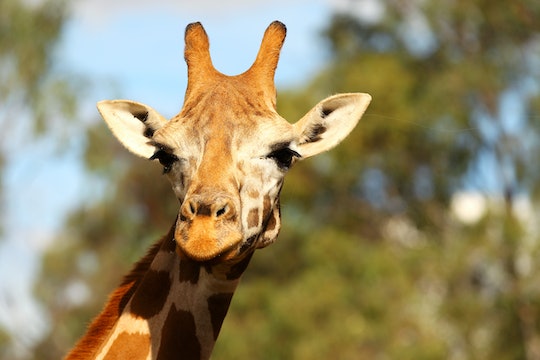 April The Giraffe Is Pregnant Again & Yes, There's A Live Stream To Watch

Last April, millions of people sat glued to their smartphones and computer screens as they watched April the giraffe finally give birth to her fourth calf, baby boy Tajiri. This may be an exaggeration to write, but it was like the world came to a standstill that day. And that'll probably happen all over again next year when April delivers her fifth calf. That's right: April the giraffe is expecting, again, and the Animal Adventure Park plans to film her pregnancy journey for fans. Want to get in on the action? Then, here's all you need to know about how to watch April the giraffe's live stream.

Last week, Jordan Patch, owner of the Animal Adventure Park in New York, announced during an appearance on TODAY that April the giraffe is pregnant with her fifth calf and second with her companion, 5-year-old Oliver. Of course, this means fans of the 17-year-old viral sensation will have to block out time on their calendar next spring so they can witness the miracle of birth all over again. But you could also watch the adventures of April, Oliver, and their baby, Tajiri, right now by visiting the Animal Adventure Park's YouTube page and checking out the Giraffe Cam.

The Animal Adventure Park knew about April's pregnancy for a couple of weeks before Patch made the announcement late last month, TODAY reported. Patch and his staff don't know yet if she will give birth to a boy or girl calf, so April's fans will have to wait until she goes into labor next year.

And, of course, there will be a long time to wait before that happens. After all, the average gestation period for a giraffe is around 15 months, according to Mother Nature Network.

Patch told TODAY, according to Newsweek:

Either way, the New York zoo can probably expect more than 1.2 million people — the number of people who tuned into Tajiri's birth last year — to watch the live stream. But the YouTube video of his delivery has now been viewed more than 15 million times since then, according to Newsweek.

April the giraffe's fans, though, suspected something was up back in June, when the Animal Adventure Park uploaded a new video to its Facebook page in June. In the online video, Patch and a fellow member of the giraffe team revealed that they were planning to send some of April's fecal samples out for testing for a possible pregnancy. That video alone has been viewed at least one million times on Facebook.

This will be April's second calf born at the Animal Adventure Park. April the giraffe's three other children were born prior to her being moved to the zoo in Harpursville, New York.

Patch has already started the live stream of April and her giraffe family because of "the connection she's had," according to People. “The camera is up, and rolling, and they’re watching right now," Patch said during his TODAY appearance.

And her fans couldn't be more excited to welcome her new calf into the world next year, especially because giraffe populations have declined by 40 percent over the last three decades, People reported.

Every calf counts. Every calf born in the program means something.

Now we all just have to wait several months before we can pop champagne in her honor!