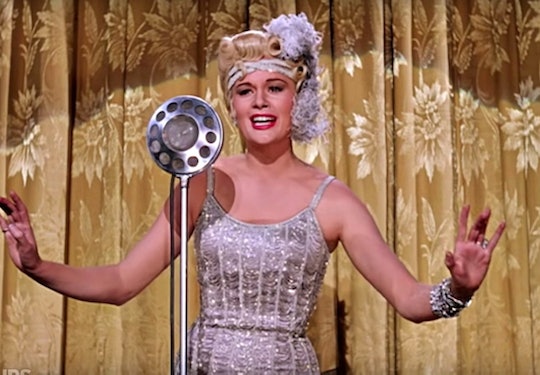 Watch Debbie Reynolds In 'Singin' In The Rain'

As if Star Wars actress Carrie Fisher's death wasn't enough to take in, her mother, Debbie Reynold's died of stroke complication just a day after her daughter on Wednesday night. Reynolds, best known for her work on several beloved musicals and whose career spanned several decades, had been preparing her daughter's funeral at son Todd Fisher's house when she was rushed to the hospital earlier in the day. For fans already grieving the loss, there are ways to watch Singin' In The Rain so that you can mourn Hollywood's most elite in the most proper of ways.

First: You should get yourself immediately to the internet and order up some Singin' In The Rain. It's going to cost you about $2.99 from Amazon, iTunes, or YouTube. But seriously, isn't it worth it? Let's be real, you can't mourn Carrie Fisher without remembering her mother, especially since Fisher spoke so openly about her terribly early relationship with her mom. Even more so because Reynolds took that shitty relationship and let her daughter talk about it in public. They even went on Oprah together and made up. If that isn't #MOMDAUGHTERLOVE what is?

So tune into some Singin' In The Rain. Let's be real: what else are you doing on New Year's Day? (That's what I thought.)

Once you're in the whole old-school film rabbit hole, may I direct you to The Unsinkable Molly Brown, which earned Reynolds an Oscar nomination? The film is about the sinking of the Titanic looooong before Leo and Kate never let go.

Reynolds was reportedly at her son Todd Fisher's house in Beverly Hills planning Carrie Fisher's funeral when she had a medical emergency that led to her family calling 911. The 84-year-old Hollywood legend died late Wednesday evening, just a day after her daughter died of complications from a heart attack.

Reynolds and her daughter had a complicated relationship, which Fisher wrote about extensively in her memoirs, most notably Wishful Drinking, which was made into a play and eventual HBO special. But Debbie Reynolds was much more than Carrie Fisher's mom — she was a starlet in the golden age of Hollywood.

Carrie Fisher had a troubled childhood growing up in Hollywood with Reynolds and her father, Eddie Fisher. But if you're feeling any feels about how Fisher approaches womanhood and feminism and just getting what you want when you want it? It has a lot to do with how her mother, Debbie Reynolds, conquered Hollywood before there was ever another galaxy. Fisher wrote in Wishful Drinking, “Anyway, at a certain point in my early twenties, my mother started to become worried about my obviously ever-increasing drug ingestion. So she ended up doing what any concerned parent would do. She called Cary Grant.”

It's somewhat fitting that both women, who started off with such grandiose, booming careers would counsel and comfort one another through later years, long after the stage and set lights had dimmed on their career-making roles.

In their honor tonight, tune into some Singin' in the Rain and let your emotions out. Hopefully, in the meantime, mom and daughter have found each other somewhere.