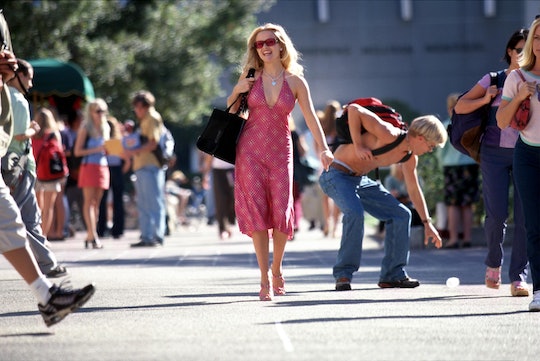 The 'Legally Blonde' Cast Is Having A Reunion TONIGHT & I'm Sorry, I Just Hallucinated

Ever wonder if Elle Woods can still pull off the "bend and snap" 20 years after the fact? Ever wonder if anyone can pull it off? Your burning questions are about to be answered when you watch the Legally Blonde cast reunion, where Reese Witherspoon hinted that she might have tried Elle Woods' signature move "for old times sake."

Witherspoon played the role of Elle Woods in Legally Blonde, a sorority girl who follows the man she thinks she loves to Harvard Law School and finds herself becoming embroiled in a murder case. The movie also starred Selma Blair as Elle's rival Vivian Kensington, Luke Wilson as her new love interest Emmett Richmond, Ali Larter as her client Brooke Taylor Windham, and Jennifer Coolidge as Elle's manicurist and friend Paulette Bonafonté.

All of these actors are getting back together along with Holland Taylor, Matthew Davis, Jessica Cauffiel and Alanna Ubach for a cast reunion on Hello Sunshine's YouTube channel on Tuesday at 3:15 p.m. PST.

Witherspoon shared the good news on Instagram with her fans. "Ohmigod you guys!! It’s a Legally Blonde Reunion," she wrote. "We laughed, we cried and we may or may not have done the bend & snap for old times sake! For the first time in 20 years, join me and the #LegallyBlonde cast tomorrow at 3:15 p.m. PST on the @hellosunshine YouTube channel! PS: Don’t you want to see if Elle & Warner finally make up?"

As Witherspoon noted, this is the first time the original cast is reuniting in two decades. And they're doing it for a good cause. The reunion will benefit the World Central Kitchen, a charity providing meals for food insecure families and individuals during COVID-19.

Naturally fans are excited to get more Legally Blonde good news after learning earlier in 2020 that Witherspoon had signed on for Legally Blonde 3 and her pal Mindy Kaling would be co-writing the script.

The first Legally Blonde movie was released in 2001 and became a breakaway hit for Witherspoon. The film, which was based on the book of the same name by Amanda Brown, grossed $141 million worldwide, according to Deadline, and won the Golden Globe for Best Motion Picture: Musical or Comedy.

There's a reason Legally Blonde remains a cult favorite two decades after it was released. And if you need to be reminded just what that reason might be, tune in to watch the cast reunion.