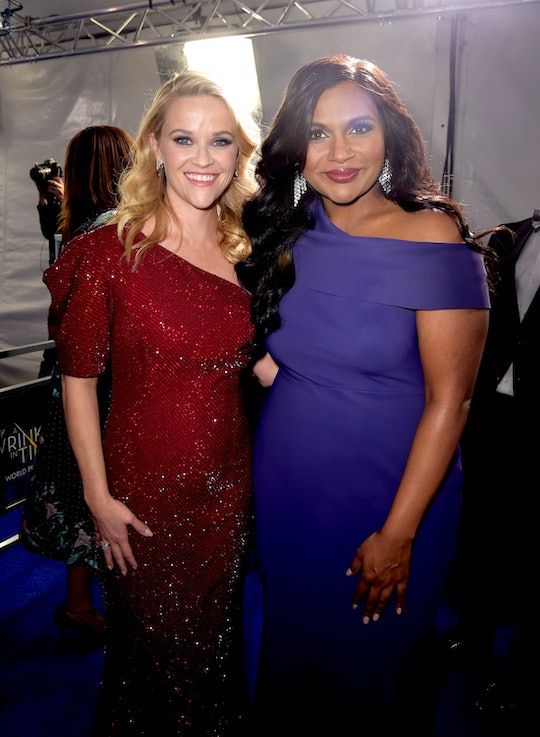 I like to believe their bond began when "Wreath Witherspoon" cropped up on The Mindy Project, but I have no proof of this at this juncture. All I know is that whatever alchemy led to Legally Blonde 3 featuring both Reese Witherspoon and Mindy Kaling working together to revive Elle Woods is some spectacular magic. And I think we can all agree that, if ever there was an Academy Award for most shades of pink to be featured in a movie wardrobe, this one will definitely be in the running.

Witherspoon confirmed on Instagram in June 2018 that there will indeed be a third installment of the Legally Blonde movies, which follow the life of Elle Woods, a young law student at Harvard who is frequently dismissed as vapid and superficial by her peers. Woods, who was played by Witherspoon in both Legally Blonde and Legally Blonde 2: Red, White, & Blonde, comes to be recognized as a real force in the legal world while also staying true to herself no matter what.

And now she's coming back, still played by Witherspoon (because who else?) but this time with a little help from the pen of Mindy Kaling. The actress/writer who brought fans amazing television series like The Mindy Project and more recently Never Have I Ever on Netflix has officially signed on to co-write Legally Blonde 3 with fellow writer Dan Goor, according to The Hollywood Reporter. Witherspoon will co-produce through her production company Hello Sunshine.

Kaling confirmed the news on Instagram with a message noting that she is "So excited to be reunited with my friends @reesewitherspoon @laurenneu and Brooklyn Nine-Nine co-creator Dan Goor to work on this movie."

"Elle Woods is so iconic, proving you can be girly and smart at the same time," she continued. "Bend and snap people!"

Witherspoon and Kaling worked together back in 2018 on A Wrinkle In Time and continued to work together recently, when Kaling had a role on Witherspoon's Apple TV+ hit The Morning Show.

While there have been discussions about making Legally Blonde 3 since 2018, the news that Kaling has signed on makes it that much more exciting. There has not been any hint as to when the movie will be expected to hit theaters or whether or not some of the other cast members, like Luke Wilson and Jennifer Coolidge, will come back for the third installment.

For now fans can take comfort in the knowledge that Elle Woods will be coming back. And that Mindy Kaling will inject her own brand of humor to the beloved character. Not to mention as many shades of pink as the eye can handle.