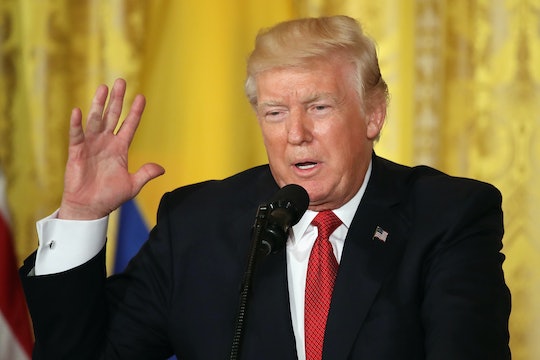 The Washington Post reported on Sunday that President Donald Trump’s first major budget proposal on Tuesday will include substantial cuts to Medicaid. According to the publication, Trump’s budget plan would follow up on a bill passed by House Republicans that would cut more than $800 billion over 10 years from the program, which provides health care to low-income Americans. And these cuts to Medicaid would affect moms and pregnant women especially, when you break down the overall impact of the proposed cuts.

According to CNN, the bill would decrease federal funding for the entire Medicaid program, which covers more than 70 million low-income kids, adults, disabled individuals, and the elderly — and those millions include mothers and pregnant women.

The Huffington Post reported that nearly half of pregnant women rely on Medicaid to pay for their children’s births. So cuts to the program would have an obvious and devastating impact on those women and their children. These cuts would hurt countless families that depend on Medicaid — and that's why, to the surprise of some, many Republicans are breaking with Trump to actually oppose the Medicaid cuts.

According to CNN, under the new Medicaid system, states would either receive a set amount of funding per enrollee (called a per capita grant), or a block grant for fixed funding. This would shift responsibility to the states and away from the federal government — which could reduce program eligibility if states have a limited budget for funding and need to limit the number of enrollees. With limited resources, states might cut benefits as well, which could include what kind of coverage Medicaid enrollees in each state get. This could make it more difficult for low-income individuals, who would include many moms and pregnant women, to get or keep coverage.

The Huffington Post laid out other demographics that could be affected by the cuts — and the outlook isn't pretty. It reported, "cuts to Medicaid would force a rationing of care to some of the communities who are lifted by it the most: Black, Latinx, Asian, Native American, LGBTQ+, and middle to low-income families; as well as pregnant women, people with disabilities, rural communities, and the elderly." In short, some of the most marginalized populations would be impacted by these cuts.

Many are pointing out the hypocrisy of these cuts in Trump's budget, because as Bloomberg pointed out, during his presidential campaign, Trump promised he wouldn't cut Social Security, Medicaid, or Medicare. This budget shows that promise is one he's looking to break just months into his presidency.

With these proposed cuts to Medicaid — in spite of campaign promises — low-income individuals would have even fewer options when it comes to health care coverage, if other provisions of the AHCA that would make getting affordable insurance more difficult come to pass as well. These other factors include higher premiums for maternity care riders and the removal of essential health benefits covered under the Affordable Care Act, which include pregnancy, maternity, and newborn care (that includes well-baby visits), for those who are able to get coverage, according to NBC News.

Millions of women depend on Medicaid to pay for the births of their children. It's very clear that mothers and pregnant women would therefore be severely impacted by a reported 25 percent slashing of federal support of Medicaid by 2026, which is the plan under this budget proposal, according to CNN.

If you oppose these cuts, find out how to contact your elected officials here, and tell them to publicly oppose a reduction of Medicaid funding as proposed by Trump's budget.