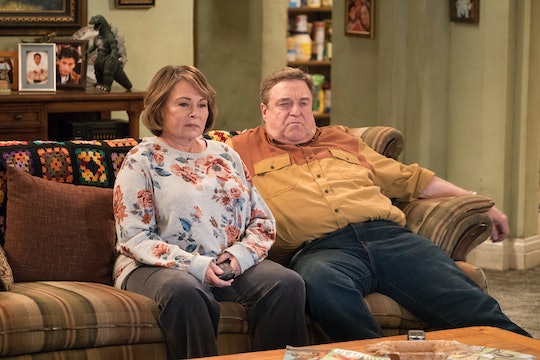 How The 'Roseanne' Revival Could Go About Explaining Dan's Death

Roseanne fans know that the revival is going to have a lot of explaining to do. At the end of the original series, it was revealed that Dan had actually died from his heart attack and that some of the other big events were different in reality. I, for one, will never forgive them for making the lottery storyline untrue, but how will the Roseanne revival explain Dan’s death?

John Goodman will be back to reprise his role as the patriarch of the Conner family, despite Roseanne’s series finale voiceover explaining that she’d lost him to the heart attack he’d had at Darlene and David’s wedding. But since the show already pulled a fast one on fans in that respect, it’s not going to be hard to throw out a few tongue-in-cheek jokes to explain how Dan is still alive in the Roseanne revival.

I mean, his non-death isn't the only thing that’s going to have to be explained. At the end of the series finale, Roseanne revealed that much of what fans saw on the show was what she’d written as a memoir, though in her real life, she’d changed a lot of the parts to it. For example, Darlene was actually married to Mark and Becky was married to David. She also revealed that Jackie was a lesbian. Since all of these details were uncovered in the final mind-blowing moments of the show, there was never really any time to expand on them or question them, but it looks like with the revival series, the characters and relationships will totally bypass Roseanne’s fictional changes and stick to the storylines as fans always knew them to be.

The good news is that if you were never a huge Roseanne fan but are now, then you can slide right into the action with zero confusion. But something tells me that the revival won't be afraid to address things like Dan being alive right off the bat. In the preview for the Roseanne revival, Roseanne and Dan are in bed. Dan has a sleep apnea mask on and when they wake up in a panic, Roseanne says, "I thought you were dead," to which Dan replies after taking off his mask, "Why does everybody always think I’m dead?" I expect plenty of those wink wink, nudge nudge moments to get fans through the initial confusion they may feel during the first episode of the Roseanne revival on March 27, but it looks like Goodman is here to stay as Dan once again.

While he could have appeared in some newly filmed flashbacks, the trailers make it clear that in the revival Dan never died and much of what viewers thought to be true following the show’s finale was actually rewritten. At the time of the original show’s final season, there was some criticism from fans, who thought it to be less entertaining and relatable as the seasons before it — like the whole winning the lottery plot twist. Thankfully, Goodman's return should more than make up for any faults the final season of the original show had.

However, after making a few jokes about it, I doubt Dan's former death storyline will be a big focus of the show, especially since there are plenty of other characters to revisit and other storylines to figure out as the reboot begins. At the very least, we can all pretend like the sadness of discovering that Dan was dead in the series finale is no longer the case since he and Roseanne have been and always will be the original relationship goals.