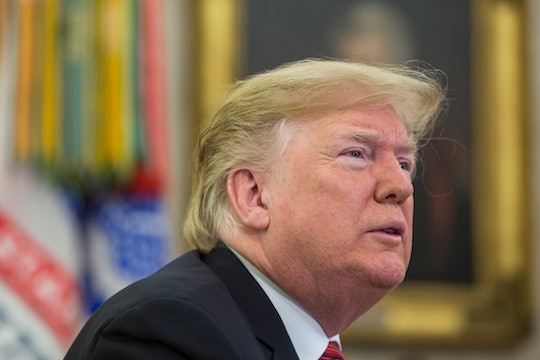 While many couples share a midnight kiss on New Year's Eve, it sounds like that's something President Donald Trump and First Lady Melania Trump won't be doing tonight. In fact, it seems the first couple won't be spending NYE together this year. That said, how will Donald Trump celebrate New Year's Eve?

From D.C. on Monday night, Trump will give an interview to Fox News during the network's New Year's Eve coverage. "President Trump will discuss the government shutdown, his New Year’s resolutions and what he hopes to accomplish in 2019," Fox News announced on Monday, as reported by The Hill. As Deadline reported, it's unclear what time Trump's interview will air, but it is expected to be sometime between 10 p.m. and midnight on Fox.

It's safe to assume that Trump will probably have a lot to say during his NYE interview Monday night, considering how much he's already said on Twitter Monday morning. He posted eight tweets — all before you woke up on Monday — and they were mostly all about how he still wants to build the border wall...

As Mick Mulvaney mentioned, Trump canceled his plans on both Christmas and New Year's Eve to stay in Washington. You can probably guess what his original plans were: a vacation in Mar-a-Lago, Florida. In fact, he had originally planned to spend 16 days at his Mar-a-Lago estate, spanning both holidays, as Deadline reported. “Due to the shutdown, President Trump will remain in Washington, D.C. and the first lady will return from Florida so they can spend Christmas together,” Sarah Huckabee Sanders, the White House press secretary, said in a statement a few days before Christmas, as People reported.

Even though Melania returned to D.C. to be with her husband for Christmas, it seems less likely that she will do the same for New Year's Eve. An anonymous source "close to the first lady" reportedly told HollywoodLife that Melania is going to attend Mar-a-Lago's annual New Year's Eve gala by herself. "Anonymous sources" aren't the most credible in the world, so take it with a grain of salt. However, it does make sense that she would be attending the party, considering how much money Trump's Secret Service reportedly contributed to it.

Last week, Quartz published government spending data revealing a $54,020 payment from the Secret Service to a Florida-based company called Grimes Events & Party Tents Inc. The payment was titled “TENT RENTAL FOR MAL" (aka Mar-a-Lago). As Quartz noted, the Secret Service often uses tents for security functions, so it's unclear if the tents are for the dance floor or just for security. As Rolling Stone reported, tickets to the New Year’s Eve party at Mar-a-Lago go for $1,000 a pop...

To those planning to ring in 2019 by watching Fox’s New Year's Eve With Steve Harvey, remember that Trump is expected to make an appearance. And if you're not in the mood for politics on NYE, just change the channel to the many other options airing tonight.