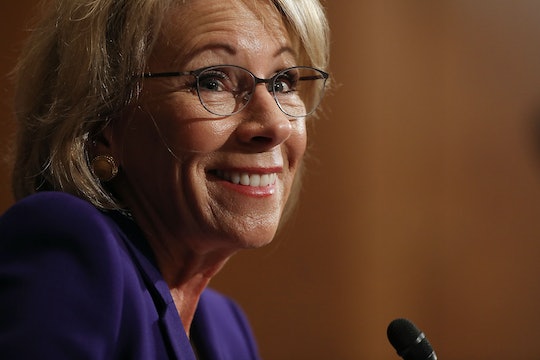 When Betsy DeVos was confirmed to head up the Education department last month, many educators and parents were concerned about some of the changes she would bring to the public education system. While anyone who believes in the public school system and equal education opportunities should be a little bit nervous about some of the changes coming out of the new administration, parents with special needs children might be the first to feel the effects. So how exactly would DeVos change special education courses? It's not entirely clear, but given her recent statements and answers during her confirmation hearings, parents already have a pretty good idea.

During her hearings, DeVos seemed entirely unprepared when it came to federal education policies regarding students with special needs. She repeated again and again that she believed that states should have the choice to decide what worked for their students, even when came to the Individuals With Disabilities Education Act (IDEA), which is a federal law. She didn't seem to know what IDEA even was at a certain point.

IDEA requires that all states provide free and "appropriate" education to students with special needs. Although DeVos later wrote a letter clarifying that she plans to uphold all federal statutes, her confusion was alarming to parents who have children who depend on special education curricula.

Last week, the Supreme Court ruled in Endrew F. v. Douglas County School District, siding with a Colorado family that sued the public school for doing only the bare minimum to educate their son with ADHD and autism. Advocates for children with special needs applauded the ruling since the Supreme Court forced the school to abide by the law. Which is exactly what legislation like IDEA is for.

Although DeVos said that IDEA would be safe while she held office, her whole approach to education isn't the best one for special needs students; For one, IDEA has always been underfunded, so schools were already struggling to provide that "free and appropriate" education to special needs students, much like in the Douglas County School District case.

DeVos' big plan for public education is to pass H.R. 610, which would give parents "the choice" to use school vouchers to send their kids to school, instead of funding and improving current ones. That, of course, channels funding away from public schools that need it to provide a stellar special education curriculum. And if states and school districts can decide on their own, in the worst case scenario, schools might decide what's "appropriate" for special needs students rather than following federal guidelines, forcing parents to move around looking for the right school for their children.