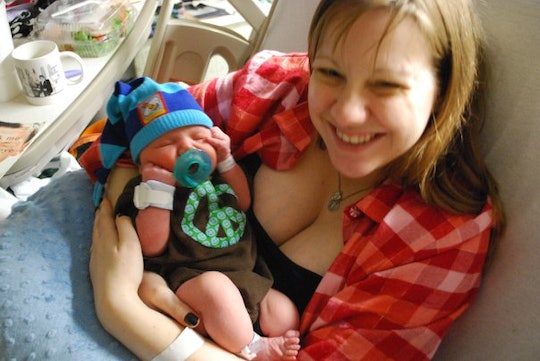 I Am A Mom With ADHD & This Is What It's Like

I wasn’t diagnosed until adulthood, but the signs were always there: my verbal interruptions, my obsession with my video games, the way I’m always late, or always early; the fact that I'm never on time. How my voice rises in volume until it’s off the social register. I was the dreamy kid who spent math class playing with unicorn erasers. They called me "space cadet," "dumb blonde," "wifty." They said I had "no common sense." But I had plenty of common sense. I just had a whopping case of ADHD.

I coasted through life with a few road bumps: lost credit cards, missed meetings, an inability to read Heidegger, because you can’t skim Being in Time while skipping whole paragraphs. But mostly I did OK. I might have had a messy car, and I might have talked too loudly sometimes, but I functioned. It worked for me.

Then I had kids. And suddenly, having ADHD as a mom mattered a whole hell of a lot more. Kids are complicated. They require nonstop attention. They need to be fed on regular schedules. You have to keep track of a whole other person’s possessions, most of which are tiny, all of which are indispensable. You have to remember, and then get to, any number of important doctor’s appointments and playdates.

But I managed. I cloth diapered mainly so that I didn't forget to buy diapers. I breastfed so I didn't forget to wash bottles. When my son was born, I had to remember diaper laundry, which I did by washing every single night without fail. We were always losing swaddles or pacifiers. With my second son, my diaper bag bulged, but not always with the right size diaper, or enough covers, or a decent wet bag. Suddenly baby shoes became a lot less important when I had one kid wrapped on my chest and another running around screaming.

My ADHD makes me forgetful, and I know it, and my parenting preparedness suffers. Sometimes my kids suffer, and that's worst of all. Parenting comes naturally. The details do not.

With three boys, well, we've finally given up the valiant fight to keep our house clean. I forgot to clean pen, marker, and crayon marks off the wall, and they became permanent. We've learned to live with it. We have to. I had to make some major adjustments, mostly to my sense of cleanliness and my tolerance for noise. But I still struggle, everyday, to mesh my ADHD and my parenting. Some days it works better than others, but those old characteristics are still there.

When I stop with my boys at the drive-thru somewhere, I don’t think to set the straw wrapper aside. I just toss it on the floor. I have a McDonald’s-worth of ossified french fries stuffed in various locations, because I have three sons and those three sons need toys and books to amuse themselves, because they might throw a fit if asked to look out the window for once. So the bag is padded with a deep detritus of reading material, stuffed animals, and said french fries. When I open the door, cups roll out. I stuff them back in and pretend it never happened. I just don't think to clean. And when I do, I plan to do it tomorrow.

Mothering three young boys with ADHD is nothing like I thought it would be. It's not as smooth, not as easy. I'm scrambling for traction more often than not.

I can't help but feel like other women with kids always have diaper bags stuffed with everything needed to survive a nuclear apocalypse. Those diaper bags don’t just carry the basic accoutrements of diaper changes. They’ve got snacks. They’ve got juice. They’ve got designated snot wipes. There are toys, blankets, and a maxi pad or two. I’m lucky if I remember to stuff more diapers in my already overflowing bag (because sometimes I forget we decided to use cloth). Then I have to borrow wipes from an obliging friend.

I feel inadequate when I see those mega bags, or when a women unearths a pacifier for her fussy baby in two seconds flat. My ADHD makes me forgetful, and I know it, and my parenting preparedness suffers. Sometimes my kids suffer, and that's worst of all. Parenting comes naturally. The details do not.

I have problems getting out of the house because we’re always losing shoes, forgetting medication, or needing one last blessed cup of coffee. If I don’t plan for the day ahead of time (or my alarm doesn’t go off, which happens with startling frequency), we’re typically late, usually by about half an hour. The sense of mortification never goes away. I'm afraid my kids will think it's normal and acceptable to saunter into every engagement 20 minutes after it's started. I make a point to say how rude we're being — how rude I am being — but I don't think it sticks.

Mothering three young boys with ADHD is nothing like I thought it would be. It's not as smooth, not as easy. I'm scrambling for traction more often than not. I don't notice the baby pouring water in the hallway because the older two are fighting in the living room. Obviously, I expected motherhood to be chaotic. But I thought I'd keep a handle on most of the chaos.

People who don't know me (and sometimes some who do) assume that I want to live like this. They assume my messiness is laziness, or some other character flaw, and that forgetting diaper wipes means I don't care about my kids.

I've had to let go of an ideally clean house. Martha doesn't live here, people. With a husband who also has ADHD, I've learned to live with clutter. Crayons don't have a designated place, neither does paper. We can never find scissors or tweezers or fingernail clippers. ADHD means running out to Babies "R" Us, again, to buy another NoseFrida, again, because we've lost the one we have. Life isn't picture-perfect, and neither is the floor of my minivan. If I don't accept it, I go crazy.

People who don't know me (and sometimes some who do) assume that I want to live like this. They assume my messiness is laziness, or some other character flaw, and that forgetting diaper wipes means I don't care about my kids. But mostly, people are accepting. Friends know I'll be half an hour late to playdates. They understand.

For the most part, I don't mind the chaos. The art supplies dumped on the floor, the robo-dinosaur left on — sure, they're annoying, but it isn't the end of the world as we know it. And my kids are lucky, because a high tolerance for mess means a high tolerance for Play-Doh and paint, glue, and glitter. I hyperfocus too, so my kids have awesome hair. I like doing hair.

It’s hard to parent. It can be even harder when you’re not neurotypical, when you seriously can’t remember people’s names from one playdate to the next. A lot of the time, I still feel like the dumb blond space cadet, even though saying that, for me, has nothing to do with playing into the stereotypical trope. Yet I keep on keepin' on. I have to set a good example for my sons. After all, at least two of my kids have ADHD — they're just like their mama.