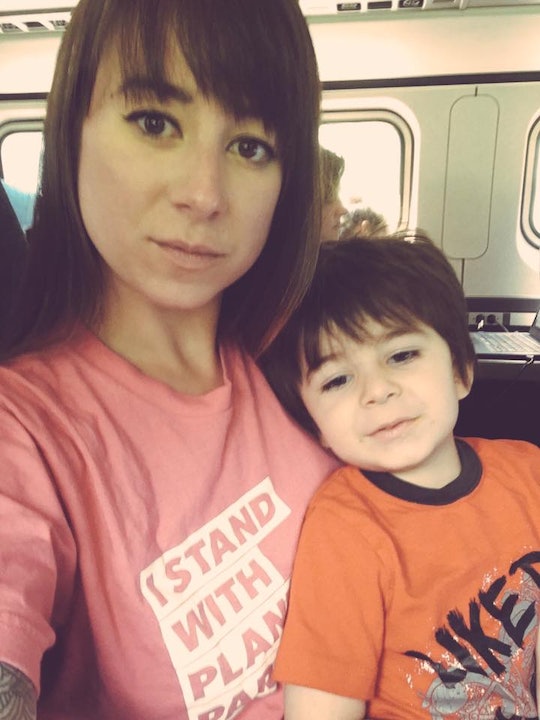 I Am Absolutely Politicizing Motherhood & You Should, Too

The negative impact of the 2016 presidential election is so pervasive, it's difficult to summarize: the ongoing attempt to ban people from predominantly Muslim countries from coming to the United States, attacks on women's reproductive rights, three separate attempts to repeal the Affordable Care Act and defund Planned Parenthood... I absolutely could go on. As a result, I've become increasingly invested in speaking out against Donald Trump's presidency and his policies. In reaction, friends, family members, and strangers constantly implore me to "stay out of politics," and that terrifies me. Because these detractors seem to base this admonishment on the fact that I have a son. People on Facebook and Twitter have asked (read: told) me to "stick to parenting," and when I don't, have accused me of using my son to advance my political agenda. Well, I am absolutely politicizing motherhood, and you should, too.

When I held my son in my arms for the very first time three years ago, after 40 weeks of a painful, complicated, difficult pregnancy, I swore to him I would protect him, no matter what. Today, that means becoming and staying politically active and involved. Since January 20, 2017, Trump has proposed and attempted to pass policies that could negatively affect not just my family's future, but the futures of the friends I love, and of the millions of families I don't know but share this country (and planet) with. And every time that happens — whether it be the latest attempt to repeal and replace the Affordable Care Act, or the "new" travel ban — I remember the promise I made my son.

Because when I watch the news and hear about another piece of legislation submitted by this administration, I think back to the moment I held my son in my arms seconds after he made his way into this extremely complicated, often terrifying, magnificent world.

That is why I marched on Washington, D.C. during the Women's March, my son at a friend's house nearby. That's why I've taken my son with me to to the United States Senate to speak out and in support of Planned Parenthood. That's why I've used my social media platform, including pictures of my son, to highlight how important it is to make my 3-year-old toddler, even at a young age, aware of the plights of his fellow man; plights he will, one day, be tasked with eradicating, himself.

Because when I watch the news and hear about another piece of legislation submitted by this administration, I think back to the moment I held my son in my arms seconds after he made his way into this extremely complicated, often terrifying, magnificent world. And I can't keep the first promise I ever made as a mother if I can't provide for my son. As a working mom, I rely on certain workplace protections that ensure I'm allotted what I've rightfully earned. So far, Trump has revoked the Fair Pay and Safe Workplaces Executive Order, signed by President Barack Obama. According to American Progress, Trump's order "eliminated a requirement for federal contractors to provide employees with basic information about their pay, including hours worked, overtime earnings, and any pay deductions." That information is crucial in closing the gender pay gap and ensuring workers are paid what they're earned. And while I am not a federal contractor, these regulations — or lack thereof — serve as a guidepost for all businesses. If the federal government won't guarantee the aforementioned for all its workers, no other employer has the example or incentive to do so.

I also can't provide for my family if I can't go to work. While my partner stays home with our son during the day, and attends full-time college classes at night, next year my partner's class schedule will change, and we will have to look for childcare. According to American Progress, Trump's proposed federal budget would "eliminate $1.2 billion for 21st Century Community Learning Centers and summer programs, which provide before- and after-school care for 1.6 million children nationwide and make it possible for parents go to work." Currently, my partner and I cannot afford private childcare or a nanny, so after-school programs at public preschool centers will be, in all likelihood, our only option.

I wouldn't have my son, or my loving and supportive partner, if it wasn't for abortion access and the right to control my own body. I was 23 years old when I found out I was pregnant for the very first time. I was also less than a year out of college, living paycheck-to-paycheck, and sharing an apartment with my then-boyfriend. Our relationship was undeniably unhealthy, and in a way that only a positive pregnancy test could highlight. Thankfully, Planned Parenthood provided me with an abortion that allowed my then-partner and I to go our separate ways. Now he has a daughter with his family, and I have a son with mine.

I can't afford to have another child if the Trump administration allows insurance companies to withhold coverage based on preexisting conditions, or empowers companies to provide inadequate coverage to pregnant women, postpartum women, and children.

But Trump has repeatedly attacked Planned Parenthood and abortion rights for women across the country. One of Trump's first acts as president was reinstating the Global Gag Rule which, according to The Hill, "banned international NGOs from providing abortion services or offering information about abortions if they receive United States funding." Trump also signed a law allowing individual states to "defund" Planned Parenthood by withholding national funds and stifling federal family-planning grants.

I can't afford to have another child if the Trump administration allows insurance companies to withhold coverage based on preexisting conditions, or empowers companies to provide inadequate coverage to pregnant women, postpartum women, and children. If the now-dead Graham-Cassidy health care bill had passed, private insurance companies wouldn't have been required by federal law to provide coverage for maternity and newborn care, mental health care, and pediatric services, according to The Atlantic. I suffered from postpartum depression and postpartum anxiety after my son was born, as do an estimated 10 to 15 percent of women, according to Postpartum Progress, a nonprofit, tax-exempt charitable organization dedicated to providing support for women suffering from postpartum depression. Before the Affordable Care Act, according to The Kaiser Foundation, "75 percent of plans on the individual market excluded maternity coverage, 45 percent excluded substance-use treatment, and 38 percent excluded mental-health care."

I made a promise to my son the moment I held him in my arms, and keeping that promise means making sure those voted into office keep their promises, too.

And I can't promise my son he will be safe when I, one day, send him to school or a concert or a movie theater. According to Newsweek, there were 244 mass shootings in the first 240 days of 2017. The most recent, in Las Vegas, occurred during the final day of the Route 91 Harvest Music Festival in which, as I write this, 58 people lost their lives and another 400 were injured. It is now the deadliest mass shooting in United State's history. Las Vegas has the most-relaxed gun laws in the nation, according to Newsweek.

According to CBS News, since 2011 more than 100 gun control proposals have failed to pass Congress. And according to Politifact, "one of the first regulations President Donald Trump vowed to slash was President Barack Obama's executive order on gun control that was implemented in the final year of his presidency." As long as our elected officials fail to pass comprehensive gun laws that will protect our citizens, including my son, I cannot drop my child off at kindergarten and assure him (and myself) that he will won't be the next victim of senseless gun violence.

Every decision I have made in my life that applies to parenthood (and many that have not) — from the choice to refrain from being a mother, to the decision to have a child when I was ready, willing, and able, to having a hospital birth with medication, to becoming a working mom, to deciding to try to have another child, to big life decisions I haven't even made yet — has been impacted, in one way or another, by politicians and the political platforms they stand for or against.

And I can't promise my son he will be safe when I, one day, send him to school or a concert or a movie theater.

So perhaps I was wrong: I am not politicizing motherhood; it has been politicized for me. Working families have long been a driving force in politics — Rosa Parks, a cornerstone of the Civil Rights Movement, was a working mother, for example — and have also always had the most to lose when unfair and unjust policies become law. In lieu of federally mandated paid maternity leave, 1/4 of mothers return to work two weeks after giving birth, according to a 2012 survey conducted by the US Department of Labor. When abortion access was restricted in Texas, the state's maternal death rate doubled. And as our elected officials have failed to pass any sort of prison reform, continuing to allow an unfair justice system to thrive, in 2017 our nation's prisons held approximately 744,200 fathers and 65,600 mothers, according to the Bureau of Justice Statistics. To disengage from politics simply because I've procreated would not only be wrong, it would be dangerous.

Because the undeniable fact the majority of privileged individuals in the United States have been lucky enough to ignore, until now, is that politics is involved in every single facet of our lives. To disregard what is going on politically and how our elected officials are impacting our lives, and the lives of our children, through newly introduced and already passed policies, is to forfeit control over our futures and the future we hope our kids will one day have. After all, I made a promise to my son the moment I held him in my arms. And keeping that promise means not only making sure the people I voted into office keep their promises, but that the ones I didn't vote for never do.