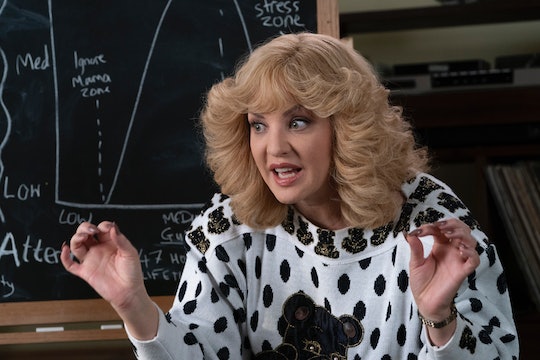 Beverly Goldberg Is The "Smother" MVP & I'm Accidentally Turning Into Her

I never set out to be the kind of mom who, despite her better intentions, ends up revolving her entire life around her children. To each her own, but I swore it wouldn't be me. I said I'd hold down my career and friend groups, my marriage would be unbreakable, and my kids would see that the world doesn't stop turning because they need something from me. But before I knew it, things shifted and now, I am Beverly from The Goldbergs no matter how hard I try not to be.

If you've never watched the ABC sitcom set in the '80s, The Goldbergs is based on the real Goldberg family. It's created by youngest "schmoopie," Adam F. Goldberg, and captures the essence of a lot of loving families, I think. There's the fiercely independent oldest sister, Erica (Hayley Orrantia), who dreams of becoming a rock star; lost middle child, Barry (Troy Gentile) who's the perfect blend of emotional and stubborn; and youngest sibling, Adam (the character based on the creator), a wannabe filmmaker who documents his family's antics.

At the core, the kids are held together by smothering, helicopter mom, Beverly (Wendi McLEndon-Covey). The "smother" does the bulk of mom-ing while husband, Murray (Jeff Garlin), watches TV in his underwear from the comfort of his recliner. (So relatable). As a stay-at-home mom with all her eggs in her family's basket, she meddles and bedazzles; interferes and interjects. She gives her kids "huggies, snuggies and nubbies," and more than anything, she won't apologize for any of it and it's fabulous. My kids got "huggies, snuggies, and nubbies" before I let them leave for school today so, Beverly is very much part of me whether I want her to be or not.

In all honesty, I didn't morph into a version of Beverly Goldberg until my son came into the world. I was a different mother to my daughter, who just turned 12 in October. I was still protective, but better able to let her explore her independence back then whereas later, I began to struggle with it. Like a lot. Once she entered her toddler years, and as we tried to give her a sibling, I felt my evolution in the making. I'd had two high-risk pregnancies after a bout of infertility, two miscarriages, and was told my son wouldn't make it to term. But when he did, I held him and didn't let go and honestly, I'm still trying to. His birth was the start of my transformation from mother to "smother." Because I wanted him to be safe, forever and ever, Amen.

Voted the best TV mom on TV in 2015, Beverly is the perfect example of extreme helicopter parenting and yet, I find myself gravitating towards it, understanding her motivations and reasoning like I never used to. I've realized lately, no matter what I do to deter myself from "smothering" my children, I'm still a total Beverly. And you know what? They're amazing, independent, loving individuals, so I'm really not sorry.

Here are just a few examples of how I'm slowly morphing into Beverly Goldberg.

More Like This
What Parents Need To Know About Marvel's New She-Hulk Series Coming To Disney+
The Worst Fake Babies In The History Of Movies & TV
10 Cozy, Romantic, & Drama-Filled Shows To Watch If You Love 'Virgin River'
'Virgin River' Fans Can't Stop Cracking Jokes About How Charmaine Is *Still* Pregnant