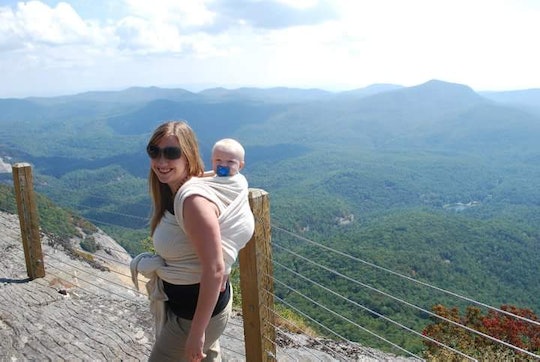 I Am So Proud To Be An Attachment Parent

When it comes to attachment parent characteristics and stereotypes, my family would fit every single one of them. My husband and I are textbook attachment parents, and I'm so proud to be an attachment parent (AP). I breastfed all three of my children, one until he was 3 years and 3 months old, my second son until he was 4 years old, and my third son… well, he’s 2-and-half years old and still breastfeeding. I've tandem breastfed and I’ve breastfed my friends’ kids — most notably, my godson. My kids have co-slept since they were born, and all but one has bed-shared with me and my husband since birth (but even the one who didn't ended up bed-sharing by 2 months old). In order to fit our three sons, we took our four-poster canopy bed down and we all sleep on a queen mattress side-carred to a twin. Both beds sit on the floor so no one can roll out. The baby still sleeps with us, and the older two, now 4 and 6, creep in most nights to cuddle. We cloth-diapered exclusively; my kids have only ever had disposable diapers on their butts about two times each. We never let our babies cry, but instead responded to every squeak.

I wore all three of my kids in woven wraps. In fact, they only came out of said wraps to get changed or for me to sleep for the first few months. I got so into babywearing that I ended up as an educator with Babywearing International, teaching other mothers how to wear their babies. I was known as the master of breastfeeding in a sling, and called on to demonstrate it regularly. I wrote the definitive guide to making your own wrap, and I still review carriers on my blog.

I might not have gotten the perfect unmedicated birth I'd hoped for, but I had my kids on the breast within seconds after arriving. We spent at least an hour together before the nurse took them for vitals. But that’s not the only thing I’m proud of.

They feel secure in themselves to do what they want, and they don’t need me to lubricate their social interactions.

I’m proud of how independent this style of parenting has made my children. For example, none of my sons have ever had a "lovie," and they don’t suck their fingers or thumbs (and my oldest has a serious oral fixation). I believe that's because they always had mom and dad there to comfort them, instead of an inanimate object.

I’m proud my kids are independent at playdates. Even at new places, with new people, when my kids walk in, they immediately scatter — to the play structure, to the swings, to the people they haven’t met yet. They introduce themselves, or ask if other kids want to play some game with them. They don’t cling to my leg or come back to me for reassurance, the things I see some kids doing. My kids only come back to me when they want a juice box, or because it’s time to leave, or when they’ve been hurt. I know this is because they feel secure in themselves to do what they want, and they don’t need me to lubricate their social interactions. I believe this comes from a sense of security early in life. We met their needs when they were small and now, they feel secure as older children.

Attachment parenting helped make them independent by meeting their needs as small babies.

I’m proud my kids are independent players as well. They don’t need me to entertain them. They want me to entertain them, of course, but left to their own devices, without the TV, they find all sorts of ways to amuse themselves: playing with their building toys, making elaborate make-believe scenarios. They don’t drape themselves over the couch and complain how bored they are. I know that’s because attachment parenting helped make them independent by meeting their needs as small babies.

Pride in this independence has helped me ignore the people who judge my parenting style. I heard criticism about the co-sleeping, about the fact we didn't have babysitters early on, but I knew attachment parenting would pay off in the end. It's been amazing to see my kids flourish on their own, and knowing that part of that success is due to attachment parenting. That flourishing, and that independence, means more to my husband and me than the ability to sleep in their own room. My kids are brave, curious little people. That's worth all the moving throughout the night.

There’s a joke among attachment parents: go to an AP playgroup, and the supposedly "spoiled, clingy" attachment parented children scatter. The conventionally parented children cling to their parents, unsure of the situation. That’s a gross generalization that not true all of the time, but as an AP mama, I’m proud of my kids’ independence. That’s why we chose to parent the way we do. My 6 year old might crawl into our bed some nights, but he can introduce himself to new children and play with them. And I wouldn’t have it any other way.