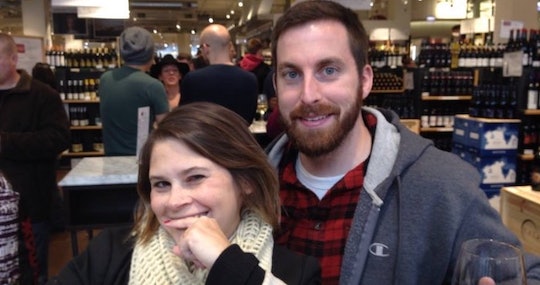 Last weekend, my husband Nic and I rearranged our bedroom. Nic hauled things to and from the garage while I held my son Oliver by the window to watch. The whole time, Oliver squawked like a wild bird, repeatedly yelling his first and very favorite word in this world: “Daddy!” All of a sudden, I heard myself saying it right along with him: "Daddy!" "Daddy!"

I remember the first time I called my husband "Daddy." It was shortly after Oliver began talking. Because it was his first word, "daddy" became the most common term in our household. I needed Nic to bring me something from upstairs, so I opened my mouth to call him, and instead of calling him by his name, I ended up calling him "Daddy." It was like the first time I said a cuss word in front of my parents: it just slipped out.

Before Nic and I had kids, we constantly criticized the way others parented. We picked up pointers for our own future parenting methods, as well as took notes on what we didn’t want to do in terms of raising a child. Calling each other anything but our first names? That was on the top of our list.

When I got pregnant, we talked a bit more about the behaviors that we wanted to avoid. "No matter what," we said, "we will not, under any circumstances, call each other 'Mommy' or 'Daddy.'" I had heard people call their partners "mommy" or "daddy," and it totally grossed me out. It was as if the person they'd married had been reduced solely to their domestic role. Instead of being their spouse, they morphed into a fellow soldier for Operation: Parenthood. "Just call each other by your real names," I wanted to yell. "Do you even still exist to each other?"

Yet since the birth of my son Oliver, somehow, in our household, “Daddy” has taken root. I use the term day in and day out. I can’t seem to stop calling my husband “Daddy.”

I think I'd probably be less disturbed by my tendency to call my husband "daddy" if the term wasn't so highly sexualized. Last year, the word "daddy" became a meme, a shorthand way to fetishize attractive older men, despite (or perhaps because of) the word's incestuous connotations. But what disturbs me the most about calling my husband "daddy" is that he's just straight-up not my daddy. He is my partner and my best friend. So calling him that is fundamentally inaccurate, which makes me feel like a loon.

Here's the thing about being a parent: You start out assuming a million things about yourself and how you plan to raise your child, and then you watch, helplessly, while your assumptions go up in smoke.

So far, I've only called Nic "daddy" in the privacy of our own home. If I ever let the term slip while we were in public, I would be mortified. After all, if you saw a woman in her 30s call her partner "daddy" while they were out grocery shopping, what would you think of her? You'd probably assume she was no longer in a romantic relationship with that person, or that she was some sort of self-infantilizing, baby-talking moron.

But even though hearing another woman call her spouse "daddy" is still anathema to me, here's the thing about being a parent: You start out assuming a million things about yourself and how you plan to raise your child, and then you watch, helplessly, while your assumptions go up in smoke. I planned an unmedicated birth, and I had a C-section with an epidural. I thought I would breastfeed for a minimum of one year, but I made it just a few months. I thought I would be a sharp-ass dresser as a new mom, but I waddled around in maternity clothes for roughly a year after I gave birth.

I have made good on so few of my promises to myself about what kind of parent I would be, and not calling my husband "daddy" was right on top of that list. Yet here I am, referring to him as "daddy," day in and day out — even though I know that if my husband called me "mommy," even once, I would probably punch him in the face.

In my defense, however, I think the reason why I call my husband "daddy" so often probably has to do with the fact that my son does. The term has endeared itself to me, the same way that Oliver's other terms have. When he calls Nic "daddy," it breaks my heart wide open. This little thing I grew is calling out his love for the man who helped make it happen, I think. It is magnificent.

Nonetheless, I realize this has to end now. From here on out, there will only be one person in our house calling anyone "daddy" — and it will be our baby, referring to his very own daddy.