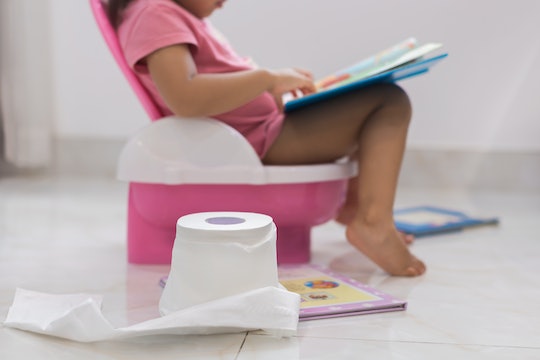 In my experience, potty training a toddler can be an exercise in futility, a battle of wills, and a huge pain in the ass — sometimes all at the same time. When I was trying to train my kid there were so many messes, tears, mishaps, and mistakes that I often felt like giving up. I felt like I was being held hostage by my toddler tyrant and her unpredictable potty schedule, so I'm not ashamed to say that I cancelled plans over my kid's potty training schedule more than once. And by "more than once" I mean "all the damn time."

I mean, what else was I supposed to do?

I was stressed out the entire time I was potty training my child, so the idea of taking her somewhere and rolling the proverbial potty dice was out of the question. And it's not like I didn't try! I made an effort, in the beginning, to have some kind of social life in the middle of potty training. But the minute I would strap my daughter into her car seat she would have to go to "the potty," and we'd have to go back inside the house. Or she'd just have an accident and we would have to go back inside and try to clean the car seat so it could be used again.

Before I knew it I had two choices: be constantly late to every social engagement I agreed to attend, possibly with a soiled child, or simply stay home. Obviously, I decided on option number two.

I stopped making plans, especially if it meant leaving the house for more than an hour two, and simply apologized to the people who didn't understand the amount of sh*t I was dealing with. And when I didn't have a choice, and I had to leave the house for an appointment or some other obligation, I would regret not spending the money (I didn't have) on a babysitter to watch my potty-training toddler. The amount of planning, packing, and back-up planning it takes to leave the house with a child who hasn't mastered the art of going to the bathroom is exhausting, messy, and often not worth the effort.

Once we left the house all bets were off, which meant I was confined to my house unless I wanted to deal with poop, pee, and an angry toddler.

I didn't want to let people down, and I absolutely would've loved to leave my home, but it only takes one public accident to keep you home-bound for the foreseeable future. Cleaning up poop in a public restroom? Never again.

It's not just that I despised having to plan so far in advance for a 30-minute outing that shouldn't be so tedious. My toddler absolutely refused to use public restrooms, which made any outing a substantial hassle. She was terrified of the automatic flushers, the toilets were too big for her tiny bottom, and the hand dryers made her cry or scream. So going to the bathroom wasn't just a chore; it was traumatic. For both of us.

It was horrifying, and so embarrassing, and while I can't blame my little girl I was at a loss as to how to help her make it through a day outside the home without an accident.

I'll be the first to admit that I set myself up for failure. I thought I could potty-train my child with a three-day potty training boot camp I found online, so I let her wander around our house naked. And after setting a timer and establishing a loose routine at home, I was able to help facilitate some sort of potty training success. But only at home. Once we left the house all bets were off, which meant I was confined to my house unless I wanted to deal with poop, pee, and an angry toddler.

My childless friends didn’t understand why I was constantly canceling plans and staying at home, and for the most part I couldn't blame them. It was difficult to articulate the anxiety I felt about my daughter having an accident in public, and it's not really something anyone can understand until they experience it themselves.

Play dates with other moms were a little better, at least until the time that my daughter pooped her pants before going down the slide at the indoor playground. It wasn’t her fault, or mine really, but the other parents were understandably freaked out, and it was so traumatic for both of us that I started turning down play date invitations, too.

I knew that this was difficult for my daughter, too, and if I could do something that would help the both of us make it through potty training then so be it.

Even plans we made on our own were a nightmare. On our family vacation to Chicago, our daughter refused to use the bathroom for the duration of the 11-hour drive it took us to get there. So as soon as we checked into our hotel she peed all over the floor of the lobby, then again on our hotel room bed. It was horrifying, and so embarrassing, and while I can't blame my little girl I was at a loss as to how to help her make it through a day outside the home without an accident.

Which is why I never felt particularly bad about cancelling plans. I knew that this was difficult for my daughter, too, and if I could do something that would help the both of us make it through potty training then so be it. My social life would still be there when she finally mastered the toilet. I just had to be patient... and so did everyone else in my life.

Now that my youngest is getting ready to ditch diapers, I’ve made peace with the fact that potty training will inevitably impact my social life. Again. But like the many stages and milestones of parenting, this too shall pass. I know it's not the end of the world, and I know the people who love and support me and my family will understand to the best of their ability.

If I can make the process easier on my son (and me) by staying home, it’s worth it.