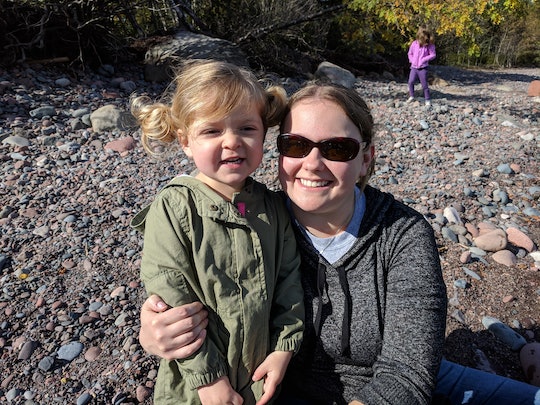 I Started Out Attachment Parenting, Then Gave It Up

Before kids I had never given much thought to which parenting style I would adopt. Even when I was pregnant I was too focused on trying not to throw up, or pee myself, or crying into my Goldfish crackers to give parenting style choices much thought. After all, the only one I had ever heard of was the term “helicopter parent” and those moms were a bit too out there for me. The funny thing is, I did find myself following a particular style, but realized I didn’t need to stay stuck in it forever. I could switch it up anytime I dang near pleased and that’s exactly what I did.

There’s become a more modern take on parenting styles in our culture today. Instead of the more traditional styles — authoritarian, permissive, and authoritative — parents today are practicing more adaptive ones like helicopter, attachment, and free-range parenting.

Now I personally know several parents who strictly practice one or the other. They're involved in Facebook groups, have read the books, and have planned out their parenting in order to reflect their style. Every one of these is a dear friend and a great parent. So when my own baby was born, I had no idea who I would take after. Nor did I really care because I too busy trying to keep the tiny human alive and I didn’t give it much thought.

But once we got out of that newborn stage, when my daughter was about three months, I realized I was practicing a particular style without realizing it. The articles I read during the middle of the night nursing sessions were on holding your baby as much as possible. Sleep with your baby in order to bond. Don’t let your baby cry too much because then they’ll think you’ve abandoned them. That one made my heart leap and I snuggled my daughter closer, embracing my attachment parenting status.

It was freaking exhausting and it was driving my anxiety up.

If I can be honest, most of my parenting style was probably brought about by some serious postpartum anxiety. I hovered over her at night, making sure she was still breathing. I was quick to catch her when she toppled over, never mind she was surrounded by no less than four pillows to break her tumble anyway. I was protective, a snarling mother bear who would rather hold her baby than let others step in. The more articles I read on attachment parenting, the more I noticed others letting their babies cry longer than I would have. I would have picked up their baby a long time ago. What if he thinks his mom abandoned him? I thought. And forget about leaving my daughter with anyone but my parents and husband. I didn’t trust anyone else with my precious little. I was also going a little bit crazy.

It was freaking exhausting and it was driving my anxiety up. I loved my baby more than anything in the world, but I was becoming consumed with her. I didn’t know how other attachment-practicing parents did it. It was probably because I didn’t read enough books and I wasn’t in any Facebook groups for it. Clearly, I was doing something wrong.

So I switched parenting styles when my daughter was about 18 months. And it did wonders for my anxiety and self-esteem.

I moved my daughter to her own room when she was about seven months. I was still bringing her to bed with me when she woke in the middle of the night to nurse, but I started cherishing the alone time I was getting with my husband in the meantime. I calmly cooked dinner (at least I probably looked that way on the outside) with my toddler whining around my legs. Instead of picking her up, I kept repeating, “I’ll pick you up in a minute. I’m busy right now.” I stepped back from my constant hold on her back at the playground. When she took a tumble off the climbing wall, I gave her a moment to see what she’d do. With no hovering mom over her, she apparently saw no need to cry and picked herself up to try again.

I joined a gym that offered child care two hours a day, leaving her in the hands of strangers. In the beginning it was rough. And then she grew to love playing there and it was much-needed time away from each other. A few months later, I put her in a home daycare two days a week, which grew to three days so I could focus on my writing business. It was one of the best decisions I ever made, letting someone else consistently care for her.

There are times when the attachment parent in me wants to hold her instead of making her walk. But that’s just loving parenting in general.

I allow my daughter to fail at things rather than help her out. While sometimes I have to sit on my hands when she is building a tower and it’s slowly wobbling, I know that if it’s this easy to rescue her from them all falling down and frustrating her, I don't want to be doing her science project for her in the name of a good grade when she's older.

Starting my daughter young at finding her independence and confidence is something I’m grateful I decided to do. There are times when the attachment parent in me wants to hold her instead of making her walk. But that’s just loving parenting in general. When our kids are babies, of course we want to be there and respond to them. But I know how easily I could have continued that trend into her toddler years and beyond. I had so much guilt back then if I was parenting right, if I was “good” enough, and it wasn’t helping me and back then. I know my baby was picking up on that.

I don’t want my daughter growing up knowing I will do everything for her. I think that when she started walking and becoming more independent — read: stubborn — I was able to really feel OK focusing on her confidence and building her self-esteem. Learning to let go and watch her grow up with me stepping back was a personal decision that I’ve never regretted.