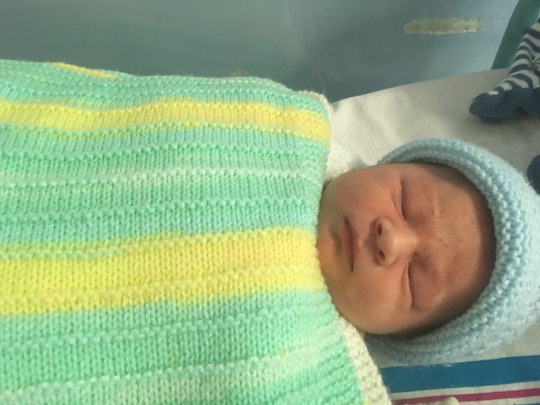 My Difficult Birth Actually Made Me Feel Pretty Powerful

As a self-professed worry wart (darn you, Virgo star sign) when I discovered I was pregnant with my first and only, I thought it best to face things as and when they appeared, on a need-to-know basis. However, when my baby was still posterior in the womb as labor hit, there wasn't a ton of time to digest all the need-to-know.

When a baby is back-to-back or "posterior" during pregnancy and/or labor, it refers to their position in the womb: the baby's spine is against yours and they face your tummy. Basically, if they are born back-to-back, or in the occiput posterior (OP) position, they enter the world face up instead of face down. Although this sounds pretty cute, there can be many complications giving birth to a baby in the back-to-back position. A large retrospective study published in 2006 in the Journal of Maternal, Fetal, and Neonatal Medicine found higher incidence of "operative deliveries" and obstetric complications in births with posterior babies. Women with posterior babies also experience longer and more tiring births with backaches, according to a report by The Royal College of Midwives.

So during a routine appointment in my third trimester, I was told that my baby was in the back-to-back position. Funnily enough, I guessed he was in an unusual position as I often felt little limbs poking out of my tummy — which, when I considered it afterwards, meant that he was facing forwards.

However, I was told not to worry as my midwife informed me that babies change positions frequently and it was likely that he'd turn around by the time it came to give birth. She gave me advice on how to turn my baby in the womb, so I set to it.

It's worth mentioning that I may have had a hand in the way my baby was positioned; apparently leaning back on a comfy sofa, crossing my legs, and not moving around enough could have encouraged him to be back-to-back. As my day job in a coffee shop is pretty physical (I'm on my feet all day, carrying trays, loading commercial dishwashers, et cetera) I decided to take my maternity leave from around seven months into my pregnancy. This, coupled with the hottest summer in years in the UK, meant that I wasn't moving around as much as I should have been. Although it's hard to pinpoint why exactly he got himself into this position, I think those factors likely played a big part.

So my midwife told me to sit backwards on a high-backed dining chair and lean over the back. She also encouraged me to sit on a yoga ball and lean forward. I could also bounce on said ball to help my baby get into the head down position.

My friends, who'd just had their babies, helped me to pick out the correct ball — you'd imagine that you'd only need to search "yoga ball" on Amazon, but it was more complicated than that. Because my friends and I are pretty tall, they helped me to pick out a larger sized yoga ball, explaining that my knees needed to be lower than my hips. One of my friends made the mistake of ordering a standard sized yoga ball that wasn't suitable for her height, so we knew that I'd need a larger one too, being around the same size.

After a time of bouncing, leaning, and being mindful of my posture, it was time for another routine checkup. My husband and I were delighted to discover that all my hard work had paid off and baby had turned around and was no longer back-to-back. As an added bonus, his head was engaged too, so he was all ready to enter the world. Or so we thought.

My labour started off OK — my waters broke, but my contractions didn't come quick enough, so I was induced via the hormone drip as I had tested positive for GBS — and things were definitely moving along.

However, when I got to 4 centimeters dilated, I felt the urge to push. My midwife firmly stated that I had to stop pushing otherwise I could create further complications. Basically, my baby was banging his head against my barely open cervix. From this point I took an array of pain relief, as I'd been going at it for hours and we were already into the next day. To say I was a little frustrated was an understatement, I just wanted my baby out and I wanted to hold him in my arms. Little did I know that I had barely begun.

My advice to anyone suffering during labor is to take the damn drugs.

Although I was frustrated, I was more exhausted than anything else. So when I was offered some respite from my hormone induced contractions, I went against my birth plan and took an epidural gladly. My advice to anyone suffering during labor is to take the damn drugs. You're pushing a human out of your vagina, you don't need to play the hero, because you already are one!

Thankfully, I didn't suffer with back labor, which is apparently horrific and has been described as feeling, "... like someone was pulling my belly button out through my spine," according to one mom who spoke with Romper. Apparently, the OP position can be a cause of back labor, but it's not a given, as was the case for me. TBH, if I'd had to contend with back labor on top of having multiple intravenous drips in my arm, varying methods of pain relief including an epidural, a posterior baby, and an episiotomy, I'd probably have begged to have a c-section, even though they scare the pants off of me.

Finally, I reached the pushing stage and it was then, after a bit of poking and prodding, that the midwife realized my baby was back-to-back. I could have wept. I knew that when a baby is in the sunny-side-up position, there's a higher risk of having a c-section, among other things. As my baby's heartbeat had been slowing and had to be monitored, the midwife told me I had half an hour in which to push my baby out, otherwise I'd be rushed into theatre for a Caesarean.

I don't know what came over me, but I felt like Adora transforming into She-Ra. I was going to get this baby out of me, even if it meant reaching in there and pulling him out myself. I had the help of a seasoned, very experienced midwife who coached me through pushing and she even pressed her fingers on the area where I needed to push — I needed the extra help considering I'd had an epidural and couldn't feel my legs.

The younger midwife suddenly asked, 'Can I cut you?' To which I enthusiastically almost shouted, 'YES!'

At the bottom of my bed stood my original, younger midwife, the coaching midwife, a doctor who kept popping back in to check my progress, and my mother. My poor husband was sat, traumatized, at the top end of the bed. The crew at the foot of my bed kept telling me they could see his head and offered words of encouragement. I honestly thought they were lying to try and make me feel better and keep me pushing, but, when they told me to reach down and see for myself, I felt the top of a head and hair. This was more than enough to renew my spirits and help me dig deeper.

The younger midwife suddenly asked, "Can I cut you?" To which I enthusiastically almost shouted, "YES!" To hell with my vagina, there was no way I would be using it again, at least for this purpose, for a very long time, if ever. I didn't feel anything.

Then suddenly, people were exclaiming that he was out! Or at least his head was. My mom gushed about how gorgeous he looked. I had a peek between pushes and there he was. A tiny little head was poking out of my vagina, face up, looking at everyone. And it was the most beautiful head I'd ever seen. A few more pushes later and my son was being handed to me and life as I knew it was forever changed. For the better of course! His head was a little cone shaped due to the fact he'd been bashing it against my cervix, but the midwives told me his head would gradually form into a "normal" shape, and it did.

Yes, my labor was long and drawn out (which could have also been down to the hormone drip among other things), yes my episiotomy scar took weeks to heal and sometimes feels a little funny almost 6 months later, and yes it was the hardest thing I did in my life. But would I change anything? No. Because my labor showed me the power I had within myself and proved that I can do anything if I put my mind to it. By the honor of Greyskull.