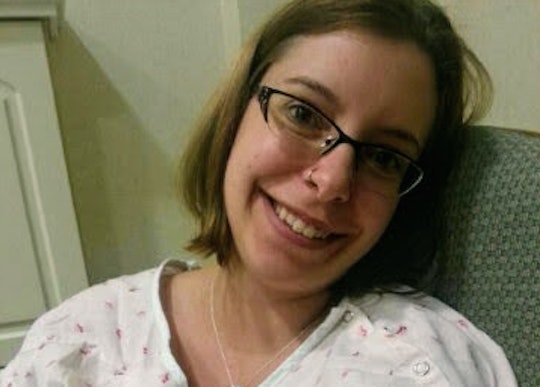 I Didn't Know I Had Back Labor & Neither Did My Nurses

“Oh, you’ll know,” they would tell me with an emphatic nod and wide eyes. When I would ask how exactly I would know I was in labor, each word would simply get its own sentence: “You. Will. Know.” That was the response many mothers gave me when I asked how I’d be able to tell. Apparently, I'd just know. But how was I supposed to recognize my unique signs of labor if even the hospital staff didn’t?

Well, let me start from the beginning.

The day before my son was born, I was in pain. Maybe it was because I was ready to pop. Maybe it was because I had spent the better part of that weekend strutting around in high heels at a bar mitzvah. Whatever it was, all I knew was that it didn’t feel like the “normal” pains of pregnancy. I toughed it out, continuing to spend my Sunday like it was any other Sunday, but between getting groceries, doing some window shopping at the mall, and making dinner, I was complaining far more than usual about the excruciating back pain I felt.

Admitting that I might need to take a break is one of my best/worst qualities. I’m stubborn. I could snap my arm in two but would still find a way to finish folding the laundry before taking myself to the ER. So when I called the doctor at 7 p.m. that night to ask what to do about the pain in my back at nearly 39 weeks, that meant something. They urged me to come to the labor ward. Who knows? I thought. This could be it.

Now my husband and I were the ones with wide eyes as we made the trip to a floor we had only toured before. Was I having a baby? They said I would know! The nurses asked me a few questions, hooked my belly up to a machine, and took the 87 urine sample of my pregnancy. When they performed the physical exam, they announced I was 3 centimeters dilated, only up a single centimeter from my appointment a few days prior. No, it was not time, they told me.

It wasn’t until about 7 the next morning when my water broke that it hit me. I was in labor. Of course this wasn’t a UTI; this was labor.

Based on my back pain and the sporadic spikes on the electrodes attached to my belly, my doctors and nurses concluded I had a UTI that was causing an irritable uterus. They wrote a prescription for antibiotics I could pick up the next morning. Until then, I could pop a Tylenol or two to get through the night. But this wasn’t like any UTI I had ever had before. I feared for my kidneys, but I didn’t question the medical professionals. I didn’t question their diagnosis when I spent an hour hunched over in the shower when I got home. I didn’t question it when I was unsuccessfully using the bathroom every 15 minutes or so during the Gilmore Girls marathon I treated myself to when I couldn’t sleep all night. I didn’t question it when I had to call my husband on the phone to wake him up because I couldn’t walk across our 900-square-foot house to tell him the pain was too much.

It wasn’t until about 7 the next morning when my water broke that it hit me. I was in labor. Of course this wasn’t a UTI; this was labor. Less than 10 hours after leaving the hospital Sunday night, we were back on our way to it, and our son was born within an hour of arriving.

Even though I never directly questioned anyone at the hospital, I walked out of there the night before his birth not fully believing their diagnosis. I won’t go as far as to say the other moms were right and I “just knew” it was labor, but I do think I “just knew” it wasn’t a UTI, and I should've trusted my gut.

It wasn’t that my labor was that short. I simply didn’t know I was in labor. All those mothers lied to me! Where was the tightening uterus? Where were the clearly timed contractions I'd prepared for? Why was it one solid chunk of pain as opposed to various stages? That, my friends, is the wonder of back labor. The pain was entirely in my lower back and, instead of contractions that could be timed from start to finish, it was a constantly increasing pain of labor that probably began the afternoon before he was born. I trusted the word of the nurses over my gut, and spent the night laboring on my couch.

When I discussed my experience with the nurses on the recovery floor, they responded with a tone that was just as casual about the surprise of back labor as the moms were emphatic about the universal understanding of traditional labor. They explained to me just how different the entire birth experience can be between mothers and gave me the rundown on back labor, that sometimes the position of the baby or build of the mother (or crappy luck) can cause pain in the lower back that is so extreme that it completely overshadows the contractions during the duration of labor. Then, when I shared my story with other mothers, there were a few who commiserated with their own back labor tales. They were all unique, but they all had the excruciating pain in common and many commented on the pure confusion of it all.

Looking back, there is nothing I would change. My son was born happy and healthy, and I spent my labor binge watching Lorelei and Rory (albeit grumpily) instead of stressing about pushing a watermelon out of my body. I can’t say I missed the experience of having a 12-hour notice of his eviction. Even though I never directly questioned anyone at the hospital, I walked out of there the night before his birth not fully believing their diagnosis. I won’t go as far as to say the other moms were right and I “just knew” it was labor, but I do think I “just knew” it wasn’t a UTI, and I should've trusted my gut. When the test came back negative, I felt silly for not vocalizing my doubts.

With baby number two making their appearance soon, you can be sure I’ll be watching for every and any sign that they’re on their way. False UTI from hell included.