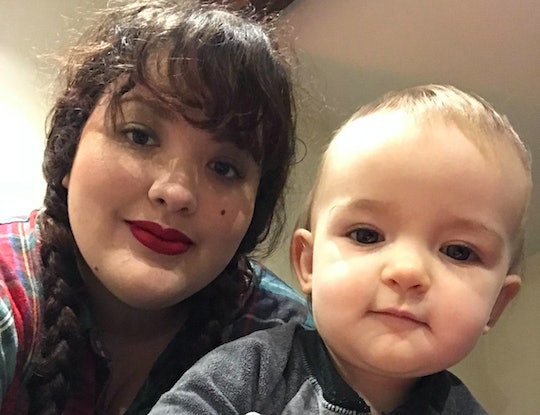 I Didn't Think I Needed "Mom Friends," But I Was Wrong

Upon unexpectedly learning that I was going to be a mom, I made a few promises to myself. For starters, I wasn't going to let this baby change me. I wouldn't give up any of my professional aspirations, nor would I exchange my tutus and over-the-top sequin pants for tunics and sweats. I wasn't going to stop hanging out with my non-parent pals just because I had an infant in tow. I didn't need "mom friends" simply because "mother" was going to be in my list of titles now. No, my life would stay more or less the same.

Maintaining my friendships — most of which were, and still are, with child-free millennials — felt particularly important to me throughout pregnancy and the early months of parenthood. At 26, I was going to be a mom long before I'd ever imagined. I was going to be trading in my Friday nights of drunken foolishness for diaper changes and 3 a.m. nursing sessions.

It's the unpleasant realities of motherhood that I most often find myself needed to talk about.

Some things, I knew, would have to change. If I managed to keep the same network of friends, however, perhaps I could still feel youthful and free. I could pretend that I was one of those multi-tasking celebrity mamas who somehow manages to run a business or star in six movies per year while also taking her kids to Disney on the weekends and chilling in smoky bars come dusk.

I'm still committed to preserving the friendships that mattered to me before I became a mother — and I'm lucky that the few close friends I had pre-daughter have been understanding, empathetic, and thoughtful as my life has turned upside down. Somewhere along the way, though, I realized that I do need mom friends. I realized that, try as they might, my non-parent buddies can't fully put themselves in my shoes (nor would it be fair of me to expect them to). They can offer advice, musings, and commiserations, but most aren't rooted in reality.

The truth is, it's the unpleasant realities of motherhood that I most often find myself needed to talk about. Though I knew this stuff would be hard, the realities are unlike anything I could have predicted.

I need friends who don't mind talking about how many times my kid had diarrhea in the night; friends who get excited over every new milestone our children achieve; friends who will cry with me when I've had enough.

For example, my daughter has never been a good sleeper. Whether she's in a crib or in bed with her father and me, she's up every hour most nights. After 12 months of infant-induced insomnia, my entire personality has shifted. I rarely feel like myself. As a result, I am simultaneously flooded by guilt over being a bad friend, or daughter, or sister, or wife, and frustration that no one warned me about how difficult it'd all be.

I also miss the freedom that was thinking only of myself, or of making decisions only for myself. I then chastise myself for such thoughts, as if craving me-time were selfish or a the hallmark of an inept parent.

I've realized that I need relationships with people who've been in my precise situation in order to maintain some semblance of stability. I need friends who don't mind talking about how many times my kid had diarrhea in the night; friends who get excited over every new milestone our children achieve; friends who will cry with me when I've had enough. In short, friends who just get it.

I'm thankful that I have a loving partner who I can vent to when necessary (which is often). He understands the exhaustion that comes from back-to-back-to-back sleepless nights, the lack of personal time, and the lack of one-on-one couple time. As for my non-parent friends, they always listen. On the rare occasions that I see one IRL, they'll tell me they're proud of me. They'll give me hugs and reassure me with thoughts on my strength.

It's been difficult to make new ties. I've tried a few baby groups, only to feel judged for being too young, or too fat, or too all-over-the-place.

However, my partner cannot understand the pressures put on mothers, in particular, to do it all and have it all. When he goes to work for eight hours a day, it's me who has to see to our daughter while trying to work from home and have any kind of life outside of motherhood. The non-moms, well, they can empathize but they cannot really understand. You see, they can still go on weekend getaways without having to check in with anyone. They can go dancing without having to spend hours pumping breastmilk or finding a suitable sitter beforehand. They can spend money on new clothes, shoes, or food that hasn't been mashed up for toothless gums. They can simply be.

Because I moved internationally shortly before my daughter was born, it's been difficult to make new ties. I've tried a few baby groups, only to feel judged for being too young, or too fat, or too all-over-the-place. I've also tried dedicating nights out solely to non-parent friends. The end result has often been breeds of separation anxiety and panic that I cannot really explain to them.

In recent months, there have luckily been some developments in the form of lovely new neighbors with a 2-year-old son of their own; there's an incredible mom of a similar age to myself who my mother-in-law set me up with. We are starting to bond, and it's remarkable how much having raw, uncensored conversations with them has helped me.

These are people who intrinsically understand why I haven't washed my hair in two weeks. They'll send me all myriad of celebratory emojis if I tell them my daughter has just stood up by herself, or said "mama," or learned to dance to a nursery rhyme on YouTube. They will have practical advice when I run into problems, because chances are they've run into them, too. They will lament for their former selves, while still actively working towards a balance between those old selves and the new selves that makes them happy. They will encourage me to do things for myself, sans any guilt — but they will also tell me that it's totally cool if I don't manage to. I don't have to worry about exhausting them by talking about my kid, because they know that when your kid consumes most of your life, that's largely what you want to talk about.

All of this, from two mom-friends-in-the-making. So while I still believe in holding onto the person I was pre-baby, and the relationships that filled me with warmth back then, I've learned that it's OK to need something different. It's OK to need new friends. It's OK to need to vent to someone who just gets it. Hell, it's more than OK. In my case, it's essential.

More Like This
Here’s What You Need To Know About That Viral 1960s Baby Formula “Recipe”
These Stepmother's Day Instagram Captions Are Straight From The Heart
Stepmom Quotes & Sayings For Every Occasion
I’m No Singer, But My Children Think I Am