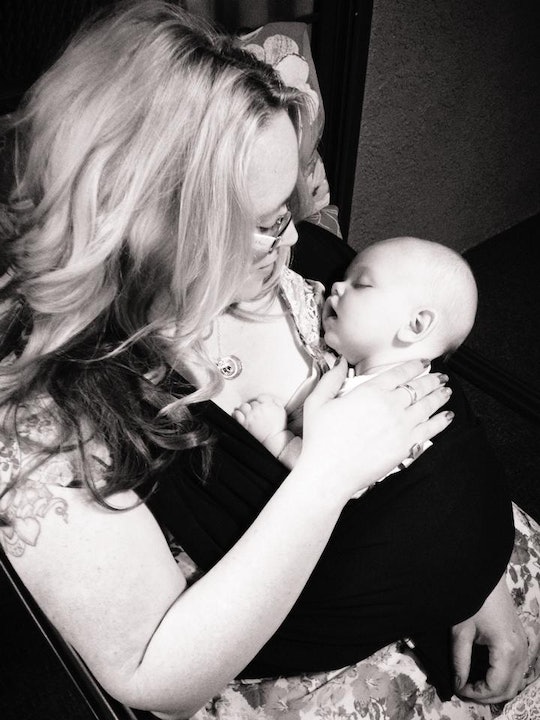 If someone had mentioned to me three years ago that I would donate my breast milk one day, I would've given them the most confused face ever. I didn’t even know donating your breast milk was a real thing until I became a mom. In fact, the only person I'd ever known to breastfeed in my entire life was my best friend’s mother, and she certainly never talked about donating her breast milk. But once I joined all of the breastfeeding Facebook pages and groups I could after I had my first child, I soon learned that breast milk was, in fact, an actual thing women did for other mothers. I read heartbreaking stories of women who couldn't breastfeed but were so thankful that other women had been kind enough to donate their milk to them and wondered if one day I would get that same opportunity.

I took to breastfeeding like a fish takes to water. It felt so natural to me and I was so grateful that my daughter and I were able to have that instant bond. I surrounded myself with supporters and encouragers, and the best lactation consultant I could've ever hoped to meet. I also read whatever I could get my hands on about breastfeeding and the science behind what's in breast milk that I soon became an advocate myself. I learned that donating breast milk had been going on for a long time, and before pumping and formula, women wet-nursed children whose mothers could not breastfeed. I also found out there were such things as human breast milk banks and entire online groups dedicated to connecting mothers who wanted to donate to those who needed donations.

For the first eight months of my daughter's life, I was a working mother, which meant I had to pump. Unlike some of my friends, I could barely pump enough to make bottles for my daughter for the following work day. But there were days when I was able to pump a little extra and as the months passed, I built up a nice little reserve of 60 oz. in my freezer. I kept my reserve on hand just in case, but I soon found out that my family would be moved overseas to Europe, and I knew I'd have to either find a way to use it or donate it.

I felt good inside that I could help this mother and her baby. She offered me money and there was no way I could accept it. I didn't want it.

The plan was still filled with so many unknowns at that point, but as it turned out, the people who were meant to have my breast milk found me much faster than I would've ever been able to find them.

The summer before we were set to move overseas, a woman put out a request on my Le Leche League (LLL) Facebook group seeking breast milk donations for her baby. She lived in San Diego and relied solely on breast milk donations to feed her child, and she and her family were relocating soon to our area. The trip — to look for a home — was going to take them six hours away from where they currently lived and she wanted to see if anyone in my area could donate to her while she was visiting. I definitely wanted to help, but I couldn’t give all of my reserves away just yet because we still had a few months to go before we moved. So I virtually raised my hand and told her I could give her 30 of my 60 oz.

I read her message and did the only thing that made sense. I immediately messaged her and told her that I'd donate the rest of my milk reserves — the remaining 30 ounces — to her.

I felt good inside that I could help this mother and her baby. She offered me money and there was no way I could accept it. I didn't want it. What mattered to me was putting my breast milk to good use, and this woman was so much more than deserving. I loved the bond our feedings had helped me build with my daughter, and it made me so happy to know that this woman would get that same chance with her own.

A few months later I donated again. We were just a couple of months shy of moving when another woman in my community put out an SOS that she needed donations ASAP because her infant was deemed "failure to thrive." Her pediatrician said she needed to get the baby's weight up within a week or she'd need to switch to formula. She was an older mother and had discovered she wasn’t able to produce as much milk as she did when she was younger. I read her message and did the only thing that made sense. I immediately messaged her and told her that I'd donate the rest of my milk reserves — the remaining 30 ounces — to her.

We lived in a smaller community in California, and there weren't many options for breast milk donations. When she came over to pick up the milk, we chatted a bit and I could tell she was so grateful for the donation. I was thrilled I could help her. It seemed like such a small thing to give her — after all, it was breast milk in my freezer — but the relief on her face reminded me how lucky I was to help her. The next week, she messaged me to tell me that the supplementation had worked and her baby had gained the weight she needed to. I was so elated for her.

In both situations, I loved connecting with these moms. I loved that my body could help them give their children something mine gave so freely. I know how lucky I was (and am) to be able to breastfeed successfully. Donating my breast milk made my privilege crystal clear. I can't imagine how nervous these mothers must have felt to reach out to a community of women they didn't know to ask for breast milk donations, but I totally understand their desire to do anything necessary for their kids. If it were me, I'd do the same.

There are people out there who think donating breast milk is "ridiculous" or "gross," but it felt like a natural extension of motherhood for me. I loved donating my breast milk, and to be totally honest, I can't wait to do it again.

More Like This
30 Marvelous Baby Boy Names That Start With “M”
Sex And Mom Guilt: When I Date Someone New, Am I Cheating On My Kids?
I’m A Newly Single Mom. How Do I Get Over My Body Insecurity?
53 Rainbow Baby Names Filled With Hope