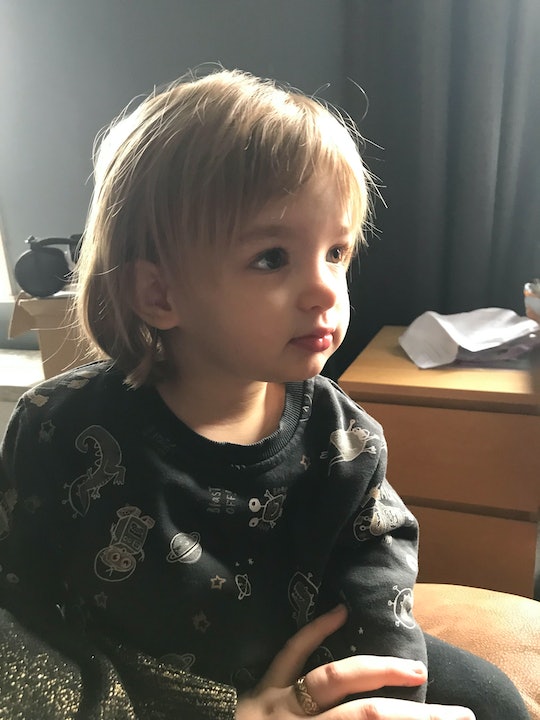 Your Child Isn't The Only Terrible Child

My 2-year-old is pretty horrible. Don’t get me wrong, I adore her. She and her sister are pretty much my world, and I’m not ashamed to admit it. Still, she’s a little nightmare. I don’t know when the nightmare began, exactly. She definitely experienced some aggressive clinginess and spontaneous tantrum-ing after we enrolled her in daycare at 15 months, but she quickly regained her sweet disposition after we pulled her out three weeks later. There was some frustration when her sister was born, but it wasn’t anything we didn’t expect. Truth be told, it was manageable (for a time). I don’t want to say that a behavioral switch turned on Luna’s second birthday, but sometimes it feels like that’s precisely what happened. Suddenly, my husband and I found ourselves desperately asking the universe how to discipline our toddler — begging the powers that be (fellow parents, internet articles, midwives, and mommy bloggers) for advice, and coming up with a whole lot of nothing at every turn.

More Like This
30 Cheap & Easy Summer Activities For Kids
This Is Why Your Toddler Wants To Feed You All The Time
The Best Splash Pads For This Summer
Is Your Kid Ready To Ditch The Nighttime Diaper? Look For These Signs

There was a time when I cringed at any mention of the “terrible twos.” In my eyes, kids were supposed to be moody. Frustration was part of growing, learning, and developing into fully formed little people. I didn’t think it was fair to assign a label like “terrible” to children only just finding the words to express their emotions; children absorbing so much new information each day; children who, understandably, become overwhelmed by the world around them. Toddlers aren’t terrible. They’re just misunderstood, and wholly deserving of our empathy.

Then I found myself with my own toddler, of course. While I still maintain that she deserves as much empathy as we can muster, and I am sympathetic to her plight as a new human coping with a world that feels mad as hell even when you’re all grown up, she’s still incredibly difficult. She’s violent with her 8-month-old sister, whacking, pushing, and scratching her at least a couple of times a day. She’s obsessed with technology, and goes into full-on, kicking-and-screaming-on-the-floor mode when we don’t want to give her our phones. If ever we don’t understand what she’s trying to tell us, she either lets out an anguished cry or starts throwing anything she can find around her. She will yell at a piercing volume if and when we forget to bring her Humpty Dumpty doll on an outing. Every mealtime is a battleground. Every attempt to put her in the car or stroller is much the same.

And the thing is, there has been absolutely nothing we have said or done that has seemed to help.

There’s been so much advice along the way from people who love her and who (I’m pretty sure) mean well, especially extended relatives and fellow parents. Some tell us to smother her with even more affection, so she never doubts that she is loved. Others swear by simply letting her cry it out — never interfering in a tantrum, but instead letting her get it out of her system. Someone recommended taking her to a child psychologist, just to make sure nothing was “like, really wrong.” Older family members don’t hesitate to remind me that, in their day, a spank on the bottom was the done thing. A different family member said we mustn’t react at all when she behaves badly, especially when she hurts her little sister.

It took me a long time to feel comfortable admitting that my daughter could be 'horrible' or 'terrible.'

All the while, we’ve tried to discipline Luna as best we can. We’ve calmly explained our perspective. We’ve raised our voices when she’s given her sister yet another wound. There was a time when I gently whacked her back after she whacked the baby (Luna cried from the shock, and I felt guilty about it for weeks). We’ve done time-outs. We’ve separated her from the situation. We’ve tried the silent treatment. We’ve taken away toys. We’ve said “no” and “no thank you” and “please don’t” more times than I care to think about.

In some moments, Luna genuinely seems to understand that she’s done a bad thing. This is especially true when she hurts her sister. She usually apologizes, and we can see some variations of regret and understanding touch her small face. Usually, though, it doesn’t take long before she does it again. No matter how much we yell, or remain quiet, or pull her away, or put on our stern faces, or otherwise try to discipline her, an act of aggression, or a tantrum, or a seemingly inexplicable fit of infuriated clinginess is never far from range.

It took me a long time to feel comfortable admitting that my daughter could be “horrible” or “terrible.” Part of me probably felt that assigning her these words meant I was making a character assessment or assumption about her nature as a whole — like I was condemning her to these traits before she was even old enough to form entire sentences or express full thoughts.

The more comfortable I forced myself to become with these words that inarguably carry negative connotations, however, the more I realized that I could utilize them to express certain behaviors and periods of her life, rather than her as a person. It’s sort of like the difference between es and está in Spanish, my native language. While both words mean he, she, or it is, the former relates to a person’s fundamental nature (their soul or innate self, if you will). The latter refers purely to how someone is in a given moment. It’s more fleeting and temporary. Luna is pretty horrible right now, but I’m not saying she is horrible at her core.

Nonetheless, the question of discipline has been an immensely difficult one to combat. I obviously want to guide my daughters to what I perceive as good standards of morality, conduct, and interactions with others, but doing so when your child cannot yet comprehend the words you’re saying, or form a connection between their actions and the punishments you try to assign, feels impossible at times. Even when Luna briefly seems to grasp our upset with her, it’s as if she forgets in a matter of minutes. Like there are simply too many other things on her mind. Like she’s trying to work out so much of what’s being said and what’s going on that she just cannot store all of the information. The relationship between actions and discipline is among the things that gets discarded, perhaps to make room for practicing the alphabet, or learning the names of all the critters in the woods, or playing make-believe with her best friend.

In turn, you can start feeling like you’re failing them. After all, it’s your job to make sure that this bright, funny, curious, and kind little person develops into a bright, funny, curious, and kind big person. It’s your job to make sure the “horrible” traits don’t take over. Particularly when you’re dealing with two or more children, and one is being violent or rude to the other, working out how to do right by them both is so damn difficult. Figuring out how to protect one without harming the other can be emotionally debilitating.

The only thing that’s helped me through it all are the words of a close friend, who is also a senior nursery practitioner. As well as being a mother to her own 2-year-old, her job largely revolves around spending time with kids ages 2 through 4, and she’s one of the few people in this world I would ever blindly take advice from; she’s one of the few people I trust wholly with my girls outside of my partner. “It’s just their age,” she tells me regularly. “They have too many feelings, and they don’t know where to put them.”

Our children may not be terrible deep down, but there’s a reason a catchphrase like “the terrible twos” has come into existence. This period in time between ages 2 and 3 is a whirlwind for them. They may be learning more words every day, but they don’t yet know how to put them all together. They can’t always tell us how they feel or what they want. They can’t tell us why they’re feeling blue. They can’t calmly explain what’s making them frustrated. They cannot argue their points with clarity and ease. They can’t understand why we don’t want them to play on an iPhone, or why they have to stop building a block tower, or why the food on the table can’t always be sweet. And, crucially, we can’t expect them to. Instead, we just have to continue expecting them to lash out. They don’t know where else to put those feelings.

Sometimes, you may still feel you’re failing your child. You may wonder where you went wrong. Have you been too strict? Have you been too lenient? Have you coddled them too much, or not enough? I don’t think most parents ever stop asking themselves questions like these. We never stop worrying that we’re somehow screwing up our children. Keeping in mind that there’s a whole damn cultural saying inspired by this specific age helps, though. If only because it’s a reminder that you are not alone. Your kid isn’t the only terrible kid. Your child isn’t the only one acting out and being mean and pushing around the people who love them most. Your toddler is not unlike most other toddlers.

It’ll pass. It has to. After all, there’s no such thing as the “terrible threes."