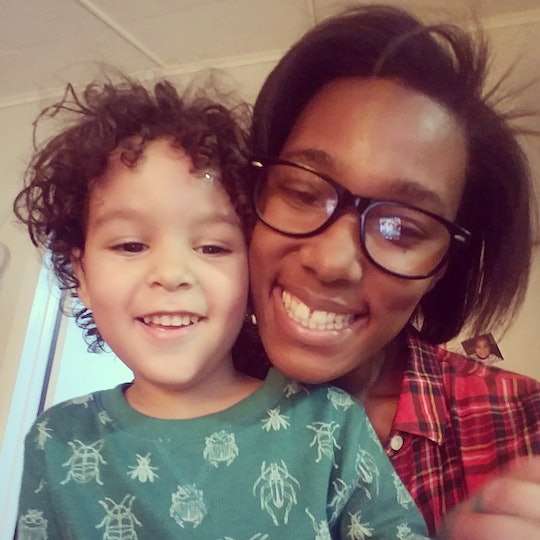 I Don't Make My Kid Sit On Santa's Lap At Christmas, & This Is Why

Because my son is still quite young, I try to not make a big deal about the holidays. In fact, before a few weeks ago, he didn't seem to have a clear idea of who Santa Claus was, so I wasn't sure he'd be interested in sitting on Santa's lap this year. Last Easter, he repeatedly asked to meet the Easter bunny because he saw it at our local mall, and at first I was hesitant because I was worried that he would be afraid of the costume. But he walked right up to the bunny and sat down next to it without any prompting.

Because of our positive experience with the Easter Bunny, I toyed with the idea of taking him to see Santa, but I wanted to take some time to think about it. Then he saw a picture of a little boy with the black Santa at the Mall of America and immediately declared that the people in the picture were him and Santa. Clearly, a decision had been made.

Yet right after it became clear that I would be taking my 3-year-old son to meet Santa, the worry started to set in. "What will he wear?," I wondered. "What day were we going to go? I hope he doesn't cry." Then I immediately thought: "Is he going to sit on Santa's lap?"

Until I had a child of my own, I had honestly never given the whole lap thing much thought. Every time I saw a friend post a picture of their kids with Santa, they'd be perched on his knee, and I just assumed that was the way it was done.

I didn't like it when strangers tried to reach out and touch him while he was in his stroller. So how would I feel about handing my son off to a total stranger, just because he was dressed like Santa?

Did it make me a little uncomfortable to think of my son sitting on Santa's lap? Yeah, it did. I didn't like it when strangers tried to reach out and touch him while he was in his stroller. So how would I feel about handing my son off to a total stranger, just because he was dressed like Santa? The concept gave me pause, in part because of the creepy, neglectful, and just plain gross mall Santas I saw on TV and in movies, like Billy Bob Thornton in Bad Santa. Why would I want to subject my kid to that?

As I talked to more of my friends who are parents, I quickly found out that I wasn't the only person who felt this way. “It's gross on every level," my friend Jennie, who has a son and a daughter, told me. "Why would my kids sit on some strange man's lap? We don't force contact with actual family members. Why would we emotionally blackmail them when it comes to a complete stranger?”

We tell our children that they should always in control of their bodies....except at Christmas, when we make them sit in Santa's lap to take a picture. It's understandable so why many parents would feel uncomfortable with that.

To be honest, I never really thought I'd be teaching my son about the importance of consent at such a young age. After all, I don't remember my mom having a talk with me about bodily autonomy, and I'm pretty sure that the consent discussion didn't come up until I was a teenager and interested in boys. But I feel especially strong about teaching my child about consent because I'm raising a son. Even though he's only 3 years old, it's important to me that he know about the types of physical interactions that are and aren't acceptable.

I try to teach my son the concept of bodily autonomy by showing and telling. I always try to ask his permission before engaging in any sort of physical affection, and if he says no, I always back off and give him his own space. It has been a challenge telling older family members that it's not okay for them to demand affection from my kid, like when Grandma says “Give me a kiss because I'm your grandma!”

When you hear stories about young men like Brock Turner, you always wonder if the parents ever talked to those boys about the importance of consent. Teaching him to ask for consent now means that when he's older, it will be embedded in his consciousness, like saying “please” and “thank you.”

On the other end of the spectrum, if my son is with friends and he wants to give them a hug or a high-five, I gently remind him that he must ask first and be respectful of the person's response. When you hear stories about young men like Brock Turner, you always wonder if the parents ever talked to those boys about the importance of consent. Teaching him to ask for consent now means that when he's older, it will be embedded in his consciousness, like saying “please” and “thank you.”

I don't want my son to think that adults have any rights to his body. I don't want to set a precedent where he doesn't think he has a say in who touches him and who doesn't. I want him to feel comfortable enough to tell me if he feels uncomfortable.

My friend Nancy, the mother of an 8-year-old daughter, agreed. “We just went to see Santa this week and I used it as an opportunity to say to my 8-year old girl that you don't have to sit on his lap, and you never have to sit on anyone's lap if you don't want to, or kiss someone, or hug. I used it as a teaching moment,” she said.

That doesn’t mean, however, that kids who are interested in seeing Santa this Christmas should be barred from it altogether. There are other alternatives for moms who feel uncomfortable with their kids sitting on Santa’s lap. “Sitting next to Santa is always an option. We let our kids take the lead – if they are so inclined, they can sit on him, or next to him, or nowhere at all LOL,” my friend Jennifer, a mother of two boys aged 5 and 3, said.

Because my son has taken an interest in meeting Santa this year, we'll go. But I know that he definitely doesn't have to sit on Santa's lap. Regardless of who he's dressed as, that guy is still a stranger. After all, if I don't force my kid to give grandma a hug and kiss, how can I plop him into some random guy's lap for the sake of a holiday picture?