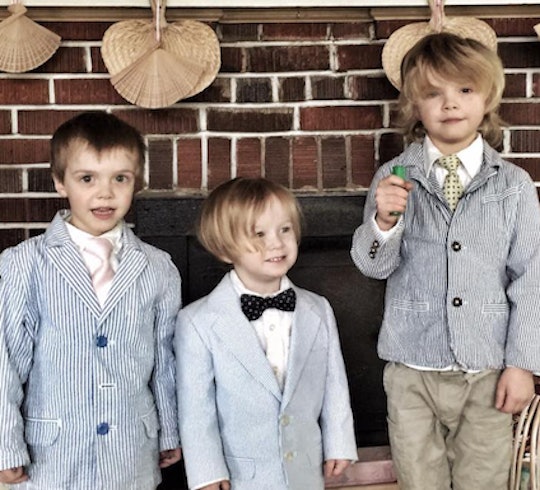 I Don't Put My Kids First & I'm Not Ashamed Of That

There’s a story where Toni Morrison’s child, mid-stomach bug, barfed all over the pages her mother was writing. Future Nobel winner Morrison told NPR that she simply wrote around the vomit until she reached a stopping point. Then she took care of her kid. As a non-parent, long before I had children of my own, I heard this tale with horror. I judged, and I judged hard. I wondered how Morrison could ignore a needy kid. She blatantly put her work before her own child — something the child surely realized and would never forget. This was, I thought, the antithesis of bad parenting. But now, I’m a parent. And I know better. It’s not the worst parents who write around the vomit. It’s the sane ones. My kids aren’t the center of my life. And I refuse to be ashamed of it.

More Like This
18 Best Sand Toys In 2021 For Babies, Toddlers, & Kids
How To Find The Best Insect Repellent For Your Kids & Babies
Vaccinated People Can Ditch Masks. Where Does That Leave Kids?
Here's The Deal With Babies Who Sleep With Their Eyes Half Open

I realized this, partially, through my own writing. Though my kids aren’t hurling on my laptop, they are staring wide-eyed at Octonauts while I peck away at the keys. My 2-year-old son often approaches and whines, but I've mastered the awkward art of nursing while typing (there’s something of an angle involved, a raised couch arm, and some hunt-and-peck fingering). I ask the kids to let the dogs in and out. I ask them to go see what the baby’s doing. They partially fend for themselves as I am half in my own world, half in theirs. And I think that’s a good thing.

I gave up a Ph.D program in teaching writing, plus a Master’s in fiction, to stay home with my oldest son. And then came two more. My husband continued to teach, just as I had done, while I scrubbed faces, scooped Legos, and mainlined coffee. I scrambled eggs. I supervised marker time. I helped run the local baby-wearing group, and surrounded myself with other attachment parents. My criteria for friendship dwindled to lactating boobs and a baby carrier.

I didn’t have anything for myself. Instead, I had children, children who had become the sun of my ever-shrinking orbit. I chose my outfits based on their stains. I planned my days according to their whims. Somewhere in between their playdates and their gym classes, I lost myself.

I stopped reading CNN. I found myself ignorant about the politics I once cared for so deeply. I didn’t listen to music, or watch television, and movies were completely out of the question. No more video games for me. I didn’t read about pedagogy or literature or writing. My cliché mom wardrobe consisted of jeans, black shirts, and sandals. I truly, madly, deeply loved my sons. I adored staying home with them: the tie-dying, the cooking lessons, the homeschooling. Since taking over as their teacher, I've learned the name and pronunciation of all the dinosaurs. I reasoned that the dumped Legos were a small price to pay for time with them.

But it wasn’t enough for me. And it never should have been. I needed more than my children to find wholeness.

As each dumped dino bin wore on me, I knew I needed an out. I wasn’t happy. Or rather, I wasn’t happy enough. I didn’t have anything for myself. Instead, I had children, children who had become the sun of my ever-shrinking orbit. I chose my outfits based on their stains. I planned my days according to their whims. Somewhere in between their playdates and their gym classes, I lost myself. My husband noticed. He knew I was happier when I was writing (or crafting, or upholstering chairs, or whatever I did that wasn’t just have kids). So he encouraged me to write.

Writing is also hard because I have to carve time for it. I have to find a sliver when the kids aren’t too hyper, when either my husband can watch them or I can plop them down in front of the TV. I have to accept that some bad behavior’s gonna go down (my 6 year old, currently, is jumping on the couch), and that I will ignore it.

I picked a site. I pitched them an article about milk-sharing, and they accepted. I joined blogging groups; I started writing for other sites. Soon I had steady work and exercise for parts of my brain — the ones that don’t fire when I read M is for Mammoth.

It felt so good to have something of my own. I've always been a writer: I won the fifth grade Creative Writing Award. I'd always turned to it: as fan fiction in high school as something to amuse my friends (they said I wrote the best sex scenes); in college as catharsis and as performance on LiveJournal. I wrote in grad school as an academic exercise, as assignments, since I was working on a Master's of fine arts in fiction. I finished a novel, but never published it. I won some awards. Rediscovering writing was like coming back home to myself.

Writing is hard. And yes, writing is hard for all the reasons writers like to tell you it’s hard. You need time; you need isolation. You get writer's block; you doubt yourself. But for me, writing is also hard because I have to carve time for it. I have to find a sliver when the kids aren’t too hyper, when either my husband can watch them or I can plop them down in front of the TV. I have to accept that some bad behavior’s gonna go down (my 6 year old, currently, is jumping on the couch), and that I will ignore it. I accept these things because I need my own deal. I’m a mom, yes, but I need to be more than a mom to offer more to the world than just three occasionally well-behaved children. My kids can’t be my life. I need my own.

My friend Rachael crochets beautiful baby clothes. My friend Becky knits like a fiend, and brews her own kombucha. Steph makes her own pickles. My cousin runs, with two kids, in a beast of a double stroller. Brian makes music — and sells it. One mom at my local co-op refinishes furniture; another takes care of her aging grandfather. Becky and Rachael teach new mothers how to wear their babies safely and comfortably. All these women do more than sweep up Legos. All of them find the same fulfillment I find in my writing. And we’re all happier parents for it.

At least, I'm a happier parent for it. My 4 year old even knows it. One cranky afternoon, he looked at me and said, "Mama, I know what you need to do. You need to go write." Maybe he said this because he needed to go watch Octonauts. But still, I did need some time away from the kids, some time by myself. So I took it. And I came out a better parent because of it.

Writing has saved me. It's made me more than just a mom. There's absolutely nothing wrong with being "just a mom," if you're happy like that. But I wasn't. There are people who may feel that my kids should be enough for me, and that by needing something of my own, I don't love them enough. But they're wrong. If I gave my kids everything I had, then I wouldn't be true to myself. I wouldn't be true to my art. And by being true to those things, I am true to my children. And I think we're all better off because of that.