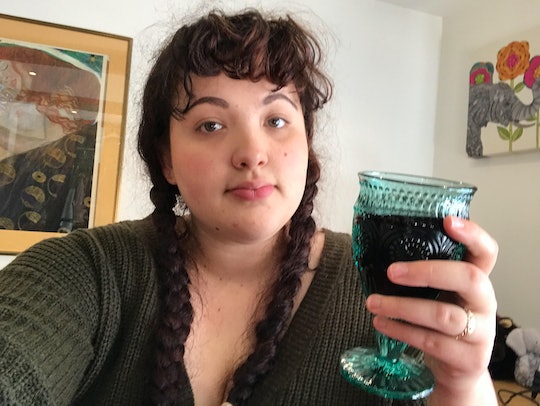 I Drank Red Wine To Increase My Milk Supply, & I Have A Message For The Old Wives

Nursing moms with an oversupply of breast milk are a frequent component of my Instagram feed. Their ear-to-ear smiles feature prominently in the photos as they sit surrounded by a dozen milk donation bags. One mom once held up a gallon that she'd pumped in only one day. I often find myself wondering whether such a supply is a miracle of luck and genetics, or whether these moms are taking active steps to boost their production. Had any tried the old wives' tale of drinking red wine to increase milk supply, for example?

Since having my daughter Luna eight months ago, I've flicked through such images in desperate longing and utmost confusion. Pumping more than four ounces of the stuff in a 24-hour period is unfathomable to me. Although I don't struggle with under-supply, per se, and my daughter is able to get as much milk as she needs when directly feeding from my breasts, expressing milk is another story entirely. This means I can very rarely leave her with a sitter for more than a couple of hours at a time.

Recently, I tried to increase my milk supply by drinking 96 ounces of water a day. The experiment proved wildly successful, taking my average pumping production from approximately two ounces in 24 hours to a solid eight ounces in the same amount of time. Having also heard of folks who drink dark beer to improve breastmilk production, I thought it was high time to try my hand at adding more alcohol into my own daily routine. Why not, right?

The internet is full of tips to increase one's milk supply. One of the most well-known hacks is drinking red wine to increase your supply. The idea seems to be that wine (like beer) aids in relaxation, and apparently, relaxed moms have an easier time with milk let-down (which did make me wonder how any mom can produce breast milk in the first place).

Mommy forums seemed chock full of success stories from ladies who confirmed that a glass of red wine a day really does keep the breast milk flowing. One mom even claimed to pump 18 ounces in one morning, having had some red wine the night before. Another said that her breasts felt extra full within one hour of boozing.

With that in mind, I decided to add a glass of Spanish red into my nighttime routine. I made sure to give myself at least two hours in between consuming the wine and feeding Luna, so the booze would be out of my system. Let's just say the results weren't what I was expecting.

I began Day 1 feeling cautiously optimistic about this experiment. Since having a baby and becoming very well-acquainted with sleep deprivation, I've often felt the call of indulging in a nice cocktail (or three). As with most me-time-related activities, however, I've rarely gotten around to buying myself any. An attempt to boost my supply felt like the perfect excuse to finally do so.

I tried to tell myself that this was a fluke. Perhaps my body simply needed to adjust to the wine. Perhaps in two days' time, I'd suddenly wake up and be able to pump 18 ounces like that mother from the forum. I just had to stick with it.

When dinnertime arrived, however, I remembered that I don't especially enjoy red wine. Alcohol, in general, is known to be extremely dehydrating since it causes water to be flushed out of the body much more rapidly than usual. I've often found red wine to be particularly dehydrating and hangover-inducing. As I sipped the Rioja from my Walmart-purchased goblet, I found myself wondering why I thought this was a good idea.

That said, I did feel ever-so-slightly more relaxed in the hour after drinking. At the peak of my early-20s partying, it would've taken me two bottles of wine to get a little tipsy. These days, it only seemed to take one glass.

Unfortunately, my boobs didn't feel particularly full when it came time for Luna's last feed. Maybe they would in the morning.

Day 2: What Have I Gotten Myself Into?

Nope. My boobs did not feel full that morning. Not even a little bit. After giving Luna her first feed of the day, I brought out the pump. Since incorporating more water into my life, I've been able to express about four ounces first thing in the morning. On this particular morning, however, after pumping both breasts dry, I was staring at half an ounce.

Once again, I woke up to soft, floppy boobs. This was not what I'd signed up for.

I tried to tell myself that this was a fluke. Perhaps my body simply needed to adjust to the wine. Perhaps in two days' time, I'd suddenly wake up and be able to pump 18 ounces like that mother from the forum. I just had to stick with it.

That evening, I dejectedly poured myself another glass. Luna hadn't seemed hungry throughout the day, so at least the wine hadn't dried me out so much that my regular milk production was being affected. By bedtime, however, my breasts actually felt less full than unusual. I was struggling to maintain my optimism.

Day 3: You've Got To Be Kidding Me

Once again, I woke up to soft, floppy boobs. This was not what I'd signed up for.

I decided that it might be beneficial to drink my designated glass of wine at lunchtime. Maybe I just wasn't giving my body enough time to make some magic. Maybe something about drinking so close to bedtime was the problem.

What I found was actually that I felt more dehydrated and less full of milk than I had in months. Pumping on this day was even more difficult. I managed to express only half an ounce over 14 hours. Luna still seemed satisfied enough when directly nursing, but there was no way I could keep this up if I ever wanted to leave her with a babysitter. It became very clear that the moms of internet forums were either lying, or they simply had very different bodies to my own.

I don't doubt this method works for some folks. But red wine was definitely not the one for me.

Although I had set out to try to incorporate wine into my diet for at least a week, I couldn't continue the experiment for longer than three days. Not only did the wine feel dehydrating to drinkt, but it was clearly drying out my body in the hours after consumption. It was drying me out so much, in fact, that I had a few good cries in the bathroom while staring at my basically-empty pump.

Our bodies vary so much individual to individual that I don't doubt this method works for some folks. In fact, after increasing my supply by drinking water, I heard a lot of moms say that doing so hadn't helped them at all. What this has shown me, if nothing else, is that we should be open to trying as many different methods to increase our supplies as possible until we find the right one for our bodies and routines.

Red wine was definitely not the one for me. Its adverse effects were highly disappointing, so for now, I'll be sticking to H2O — no matter how relaxing that goblet of Rioja might've been.

More Like This
10 Ways Breastfeeding Is Good For Moms, Too
Does Pumped Breast Milk Have Antibodies? Experts Weigh In
How To Tell If Your Newborn Is Nursing For Comfort
Why Does My Baby Cough While Breastfeeding? Experts Explain