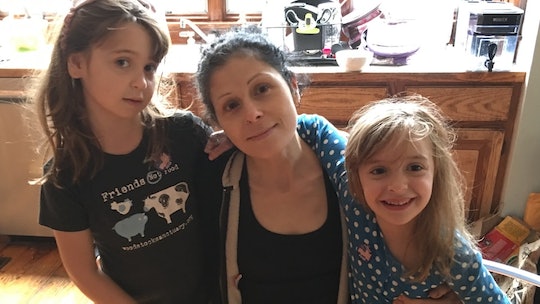 After my second — and last — child was born, I decided I wanted a mom tattoo. It wasn’t my first, but I knew it would be my most significant. I wanted to put a lot of motherhood into this one image: me as a baby in the arms of both my birth mother and adoptive mother, and my babies in my arms. I also wanted to capture the essence of the traditional mom tattoo we associate with bikers, but with a modern, more personal twist. It was a lot to ask for, but I knew what I wanted to express in this unique and personal work of art. It came out exactly the way I wanted it to.

I got my first tattoo when I was 16. Yeah, that was pretty dumb, but I was pretty dumb about things when I was 16. It's a long story how that ended up happening but, as is often the case with tattoos, once I started, the more I wanted. By the time I had my kids, I’d amassed quite a few. Some were more meaningful than others: the likeness of a pet I loved, a symbol that represented a time in my life, and a word (‘love”) on the wings of a beautiful bird all meant a lot to me. The flowers, the lizard, the unfortunate barbed wire that coils around my foot; those were more impulsive and did more to take up space between the pretty ones than anything else. If I was going to subject my postpartum body to additional and intentional pain, I wanted to have a good reason, and I wanted it to mean something.

Yes, tattoos hurt. There’s really nothing you can do to get around that. You have to decide if you want one badly enough, and if you do, you have to endure it. And they’re expensive. Or rather, they should be. Because you get what you pay for. A good tattooer (yes, the preferred term for many in the U.S. is tattooer, not tattooist) is an artist, and their art is unique and valuable. (And FYI, you get your tattoo at a tattoo shop, not a parlor.) You want to get a cheap tattoo? I guarantee you, it will look like a cheap tattoo. And that is something you don’t want on your body forever. On the other hand, a thoughtful, meaningful tattoo can really be beautiful.

I was adopted as a baby, so having biological children was especially meaningful to me. My mother — my adoptive mother, that is — had never experienced pregnancy or childbirth. During my pregnancies, she was shyly curious about how my body was changing, the symptoms I had. She marveled at every kick, every hiccup. It was strangely sweet to me to be able to experience this for us both; we’d had a tough relationship when I was growing up, and I felt like this, our first foray into biological motherhood, brought us a little closer.

When I was pregnant with my second daughter, my biological mother died suddenly. She was very young; her death was a shock to everyone who knew her. I felt robbed. We all did. A few of my family members decided they wanted to get a small tattoo to remember her: her initials, a heart, an angel wing. For me, I just kept thinking: mom.

I wanted an image that captured the dark-haired 17-year-old girl who was too traumatized by being forced to surrender me, the fair-haired newborn she was afraid to hold before having to say goodbye.

I like traditional tattoos. Think Sailor Jerry: anchors, swallows, stars, roses, words in banners, they’re right up my old-fashioned alley. But I like them with a modern twist: thinner lines, bolder colors. I slather myself in sunscreen every day so I don’t develop the forearms of a geriatric ex-Marine with blurry green blobs that once depicted an angry eagle, clutching a globe and an anchor, screaming USMC Semper Fi. No thanks. My tattoos are unique to me, not flash art picked off the wall, not a picture I brought in saying I want this. They are concepts that began with me, my emotions, and my experiences, and after what feels almost like a therapy session with my tattooer, started to take shape as an expressive work of art.

So, my mom tattoo. I did not want initials, or a heart, or an angel wing. I also didn’t want a mom tattoo that commemorated my birth mother only. I wanted an image that captured the dark-haired 17-year-old girl who was too traumatized by being forced to surrender me, the fair-haired newborn she was afraid to hold before having to say goodbye. I wanted an image that captured my mom, holding me as a six-month-old for the first time. I wanted an image that captured me, having grown into the dark-haired mother, holding her fair-haired baby, and then another, fairer-haired baby. An image that represents what mom means to me: me being the mother of two and a daughter to two. In my mind, I saw the picture of a mother-daughter embrace inside a locket. And, because I love the traditional twist, I saw a heart, and a flower, and a banner with the word mom.

Motherhood is the most meaningful piece of my identity, and I wanted to celebrate it and everyone involved.

That was a lot to ask of my tattooer, Seth Wood, of Oakland’s Temple Tattoo. We talked it through, he sketched it out, we talked it through some more, he adjusted. Are you thinking an anatomical heart, or Hallmark heart? he asked. Oh, Hallmark! Not anatomical, no! And let’s make the flower a Gerber daisy, I said. That was my birth mother’s favorite flower, and it’s mine, too. Let’s not show the baby’s face, because really this baby is three different babies. Let’s close the mama’s eyes, because in my birth mother’s case, it’s just a fantasy. She never actually held me, but I know she wanted to. As I talked, he sketched, and the picture came to life on the paper. Then we talked about how big to make it, where to put it, how to connect it to the tattoos I already had, and we were ready to roll.

We finished it in one session, one that took about four or five hours. It was more painful than I remembered, and as I lay there I remember thinking maybe it was because after experiencing the agony of childbirth it seemed ludicrous to volunteer for anything this painful (and to pay hundreds of dollars to do it) or maybe it was just that a softer, rounder postpartum body might be more sensitive than my pre-baby body. Maybe it was that I was nursing. I don’t know; I just know it was hard.

But I was happy. I loved how it came out. Motherhood is the most meaningful piece of my identity, and I wanted to celebrate it and everyone involved.

Tattoos are still not for everyone, but it seems like they are becoming more and more mainstream, even for the mom generation. Whether you want something big or small, something in a spot everyone will see or something hidden and just for you, a tattoo is a beautiful and permanent reminder of a special time, a special person, or a part of yourself that you want to call out in some way.