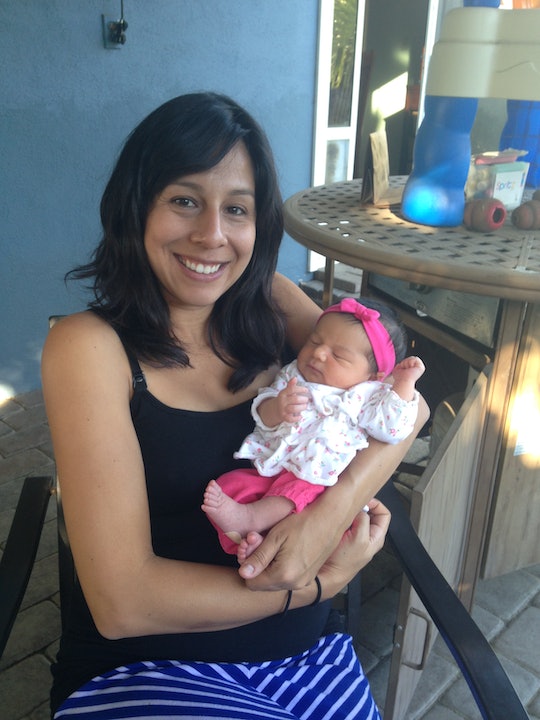 When I was told by the doctor on call that an emergency c-section was the safest and only option to deliver my first daughter, I started to cry. A c-section was not part of my birth plan, and it took me a few months post-delivery to come to terms with the fact that I wasn't able to have the birth experience I'd originally set out to have.

When I got pregnant for the second time, however, my midwife at the hospital gave me two choices: have a c-section or try for a vaginal birth after cesarean (VBAC). Knowing that a VBAC was an option stirred a mix of emotions: I was excited because I knew that I could finally experience a vaginal delivery, but I was also scared that I would once again fail at having a so-called "natural" birth.

Initially, I'd planned to have a c-section because I'd talked myself into believing it was the safest route. Plus, my second child's due date was December 24, so I felt that scheduling her delivery would guarantee that I wouldn't have to spend the holidays at the hospital. But the opportunity to have the birth experience I always wanted was too good to pass up, so I decided to have a VBAC and ultimately, I'm so glad I did.

I was particularly excited for the opportunity to deliver vaginally, because I had been so disappointed with my first birth experience. My daughter had not made her way down the birth canal on her own, and my doctor only attempted to help me push for a short amount of time before she determined that I should have an unplanned emergency c-section. My daughter wasn't in distress and I was willing to continue to try and have her naturally, but the doctor had made up her mind. As much as I wanted to speak up for myself, I was completely overwhelmed and terrified of what might happen if I told her that I thought she was wrong, so I went along with her advice and had the c-section, something I regret doing to this day.

I had two options in front of me this time, and there was only one that felt right. I wanted to try for the birth experience I'd always wanted but never got.

With the birth of my second child, at first I opted for the c-section, but like all things involving kids, nothing went according to plan: my water broke one week before my scheduled c-section and the midwife on call told me that I was a good candidate for a VBAC.

I had two options in front of me this time, and there was only one that felt right. I wanted to try for the birth experience I'd always wanted but never got. I wanted to have a VBAC. I didn’t have time to Google all the potential risks associated with VBACs, which include uterine rupture, injury or excessive blood loss. Instead, I went with my gut.

My delivery was long, painful and a little embarrassing. After I received an epidural, my contractions were easier to manage, and I had an amazing team of nurses, a midwife, and doctor who were all extremely patient with me. Pushing was exhausting, and it turned out my daughter was positioned wrong and had to be turned during delivery, the same position my first child was in during my previous delivery. This time around, I had a midwife who was on call while I was in labor, and a doctor who supported my decision to try for a VBAC.

Although my daughter was not in the correct position, the nurses, the midwife and the doctor never let on that she was not facing the right direction. I asked several times if my daughter was positioned correctly and they always said everything was OK and I should just focus on breathing or pushing. They knew that if I knew she was in the wrong position, I would have been disheartened and possibly would've asked for a c-section, even though that wasn't what I really wanted. Eventually, with a lot of well-timed pushing on my end and rotating my daughter from the doctor's end, I was able to have a successful VBAC.

Having a vaginal birth opened up a whole new world of postpartum delivery not originally known to me. After a VBAC, for instance, I was allowed to eat immediately and there were no limitations on what I could or could not eat. After my c-section, I had been forced to stick with Jello and hospital food; this time around, I had a chicken bowl, a Coke and a Starbucks coffee. There was so much more freedom in terms of being able to walk, shower, and move around whenever I wanted. I didn’t require any help getting up from the bed and I was allowed to go to the bathroom on my own.

This increased freedom and mobility allowed me to be more present and connect with my baby. After my c-section, moving had been painful, so I was not able to help much when my daughter needed to be nursed or have her diaper changed. After my VBAC, I was able to lift, hold, and breastfeed my daughter without any pain or without any help from anyone. I was able to get from the bed to my daughter’s cradle without any pain and I could soothe her to sleep by bouncing her. I was also able to leave the hospital after one night, which let me get home to my older daughter much sooner than I could have if I'd had another c-section.

Breastfeeding my second daughter was also much more enjoyable after having a VBAC. I was able to try various holds to ensure she was getting enough milk without too much difficulty; by contrast, after my first c-section, I was limited to the football hold because the cradle hold put too much pressure on my stomach.

Once I got home from the hospital, I was able to parent my newborn and my then-2-year-old daughter without any major difficulties. After I had my c-section, it felt like it took my body months to recover, since I was not allowed to drive or lift heavy objects. After my VBAC, I was sore and still uncomfortable in my post-maternity body, but I could still drive and lift things, go for as many walks as I wanted, get out of bed without any pain and go to the restroom without worrying I was going to pop a stitch.

Childbirth, be it unmedicated or medicated, vaginal or via c-section, is never easy. But after experiencing two very different deliveries, if I had to make the choice again between whether to have a scheduled c-section or take a chance at a VBAC, I’d pick the VBAC, no questions asked.