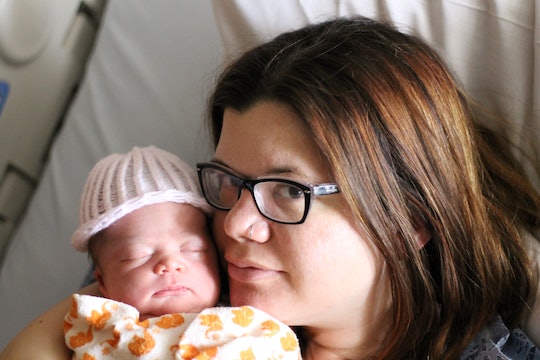 I Had An Accidental Unmedicated Delivery & Here's What It Was Like

You know those women who prepare for an unmedicated labor and delivery before they're even pregnant? The ones who immediately, after becoming pregnant, reserve an inflatable swimming pool to put smack in the middle of their living room for a water birth? Yeah, well, I’m not that woman. With my first pregnancy five years ago, I fantasized about knocking myself out at the first pang of labor and waking up as soon as the baby was out. I didn’t need to experience the triumph women spoke about after digging deep to find their inner strength through unimaginable pain. I didn't want to. I also didn't know then that I'd soon have an accidental unmedicated childbirth, but I would.

Instead, I wanted an epidural. The words spoke to me like the gentle rushing of a calm river full of pain-numbing drugs. I couldn’t wait to grab my pregnancy-appropriate mocktail, complete with mini umbrella, and float down the Epidural River that would culminate in the delivery of my bright-eyed baby boy. But little did I know that although I’d bask in the mostly pain-free haze of an epidural for my son’s birth, I’d be forced into a medication-free labor and delivery with my daughter several years later. And though I didn't realize it at the time, I’m one of those annoying women who’s actually grateful for the experience of a drug-free labor and delivery.

While preparing to push, my nurse informed us that our son's heart rate was dropping and the cord was likely around his neck, so we'd have to proceed carefully. But I felt nothing. No pain. Very little emotion.

Labor with my son lasted 36 hours. He was my first child and the mild pangs started in the early morning hours and continued to slowly get stronger throughout the day. By 5 p.m. that evening, the contractions were very painful and close, so we headed to the hospital. I endured painful contractions in the triage area, only to find out I wasn't dilated at all. They threatened to send me back home when, relief of all relief, my water broke and they admitted me.

“Can I have the epidural now?” I begged. I was dilated to a 4. The doctor agreed to let me have the epidural, and I couldn’t get that long needle in my back fast enough. Within minutes, I felt no pain and just some not-uncomfortable tensing of my uterus. Combined with some morphine I’d had earlier, I was pretty out of it. I tried to read and dropped a magazine on my face more than once as I dozed off. I slept on and off, watched TV, and visited with relatives until it was time to push. While preparing to push, my nurse informed us that our son's heart rate was dropping and the cord was likely around his neck, so we'd have to proceed carefully. But I felt nothing. No pain. Very little emotion. The epidural numbed me physically, and the hours of labor without much sleep numbed me emotionally.

The epidural had provided miraculous pain relief, but that relief came at a cost.

At last, I pushed my son out and they handed me a warm, white-coated squirmy little being. His cone head from the long time I spent pushing was covered with a knit cap. I didn't immediately register how completely I'd love him. How he'd consume my every waking thought. I nibbled vacantly on a cookie while the medical team checked my baby's vitals and bathed him. I still couldn't feel much below the waist, and remained hooked up to the catheter.

When, hours later, the nurse convinced me to walk to the bathroom, I nearly fell over. I felt sick and weak, with no bladder control. That night, I found tending to my new baby difficult while still tethered to the IV pole and having gone days without sleep. The epidural had provided miraculous pain relief, but that relief came at a cost.

Fast forward almost four years later to my pregnancy with my daughter. Despite the difficulties of the epidural, I was set on having one again with her birth. Thanks to medication, the delivery of my son was nearly pain-free, and I wanted that experience again. So I barely scanned the labor and delivery section of my pregnancy books and rolled my eyes at breathing technique tutorial videos. There was no need to prepare. I was getting drugs. All the drugs.

A few days ahead of my expected delivery date with my daughter, I woke up early one morning with a regular but mild tightening of my uterus. The light contractions came and went throughout the next couple of days, never picking up consistently. After a night of Fourth of July fireworks, my contractions finally drew close together and became painful. We made the two-minute car trip to the hospital and an intense contraction in the hospital parking lot rendered me barely able to walk. By the time we were on the labor and delivery floor, I was begging to be admitted and asking for the drugs. The nurses were annoyingly calm, like they see my kind all the time or something.

At last, the nurse gave me an injection of some sort of pain relief that would take time to take effect. The only problem was that I didn’t have time, only I didn’t know that yet.

In triage, I found out I was only dilated to a 4. I was admitted, but before I could have an epidural, I needed IV fluids. and before I could have the IV fluids, the nurses needed to find a vein, a difficult process involving many different pokes as I struggled against the brutal contractions to hold still.

Soon my contractions were so painful and close together they felt like one never-ending tunnel of terribleness. I tried to do some breathing techniques (what little I remembered from the first time around), but could barely focus in my full-body vise of crippling pain. I could only cling to the rail alongside my hospital bed and plead with the nurse for pain relief. At last, the nurse gave me an injection of some sort of pain relief that would take time to take effect. The only problem was that I didn’t have time, only I didn’t know that yet.

All I knew was I needed to escape the pain. Desperate, I crawled onto all fours in my hospital gown, crotch towards my husband, face on the bed. I felt myself poop and pee all at once as my uterus contracted violently, pushing my baby down. (Hey, my husband and I like to keep the romance alive!) I could hear myself bleating like a goat as though the sound was coming from someone else.

I had no choice. I had to push or be pregnant forever or something.

The nurse checked my dilation and announced I was at an 8. An 8?! She left the room and returned with a whole team. Team epidural! I could have high-fived them all if I wasn’t in such a fit of agony. A doctor who was definitely not my obstetrician rushed in, putting on gloves and giving orders. A nurse took each one of my legs and another stood by my shoulder. “We’re going to need you to push your baby out now,” the one by my shoulder said. There must be some mistake. This was not what I signed up for. I was not doing this without an epidural. I was supposed to be getting all the drugs.

Still, I had no choice. I had to push or be pregnant forever or something. So I put my chin to my chest as instructed and bore down. I felt a stinging sensation, but the pain didn’t worsen. I pushed and felt my baby sliding out. “One more time!” a nurse called out.

I pushed, and felt immense relief as all the pain and cramping stopped immediately and completely. I heard my baby cry. She was alert. I was, too. The nurses brought me my swaddled and sweet-smelling conehead-free baby to hold. I nuzzled her as my obstetrician delivered the placenta and sewed me up. That part hurt, as well, but the distraction of my warm new little bundle of love dulled the pain.

My baby girl latched on right away to breastfeed. She fussed a little, but quieted down when I sang to her. I felt I had to use the restroom, and so got up and walked to the bathroom without trouble just minutes after birth, no IV pole in tow. Then I walked down the hall behind my baby’s bassinet as she was wheeled to our recovery room. I hated to admit it, but I felt good. I felt really good.

The short labor combined with my epidural-free delivery made for a swift recovery and allowed me to be more emotionally and physically present for my baby’s birth and the aftermath. My husband and I have decided we are done having babies, but would I have an epidural again if given the chance? Probably. The prospect of a virtually pain-free birth is just too tempting to pass up. Still, I’d done unmedicated childbirth, even though that wasn't part of the plan. Sometimes natural childbirth is a choice and sometimes it’s not. Childbirth, like life, is unpredictable and doesn’t have to play by the rules.

All said, it’s pretty empowering to know that we women really are capable of handling unmedicated childbirth, planned or not — unfathomable pain, pee, poop, and all.