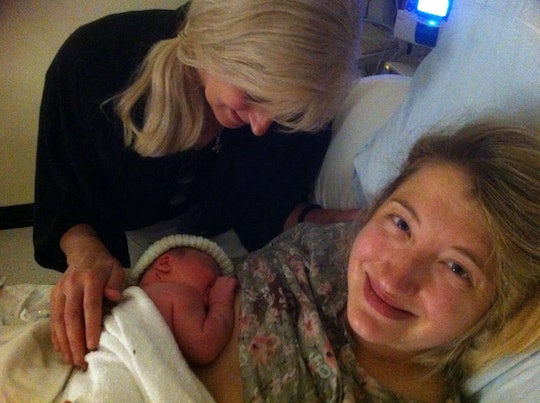 I Had An Episiotomy, & It Worked Like A Charm

Let's get things clear: I am a squeamish person. I'm OK with natural bodily functions, but anything to do with blood and injuries and you'll find me on the floor. Rewind time and my past pregnant self would be flabbergasted to discover that I'm so pleased I had an episiotomy.

So, what is an episiotomy? According to the UK's National Health Service (NHS), an episiotomy is the term for when a woman's perineum is cut during labor. FYI, the perineum is the taut bit of skin between your anus and vagina.

Nope, I'm not a masochist, nor am I still high from the cocktail of drugs I opted to take during labor. In fact, before giving birth, I was against any intervention and wanted to have as "natural" a birth as possible. I'd even been practicing hypnobirthing and was dead set on having a water birth with no pain relief aside from Entonox nitrous oxide (gas and air).

I'd heard all the horror stories of people ripping down there, which I thought to be ghastly in itself, but actually choosing for someone to cut your genital area was definitely not something I could see myself doing. I'd even used perineum massage oil in the run up to the big day, in the hopes that my lady parts would loosen up, but it didn't really make a difference as things panned out.

So, why would I be glad to have endured an episiotomy, you ask? During the pushing stage of my already long labor — where my baby's heartbeat kept dropping and I was at risk of being rushed into theater for a c-section — we discovered my baby was in the posterior position. Basically, he was in a tricky position for a natural birth and after having an epidural, I was tiring and finding it difficult to push him out.

It's worth mentioning that I was, and still am, petrified of having a Caesarean. All power to you if you're not bothered about having your stomach opened like a closet and your baby plucked out, but for me, someone who's never had surgery before, c-sections are the stuff of nightmares. Thus, I was desperate to give birth to my baby vaginally.

After being encouraged to reach down and feel the top of my baby's head poking out of my nether-regions, I felt even more determined that I could give birth to him vaginally. I was so close. So when my midwife asked if she could cut me, I almost bit her hand off, because I knew it would make it easier for him to fit out.

I don't remember the actual 'cutting' part. Nor did I feel anything.

Thankfully, I don't remember a thing about it. I don't remember being injected with anaesthetic, in fact I wonder if I even needed any because of my epidural. I don't remember the actual "cutting" part. Nor did I feel anything. Childbirth is a weird and wonderful thing — you remember certain parts in great detail and forget others, like some kind of weird fever dream. Fun fact: it was only afterwards that I discovered they don't use a knife to perform an episiotomy, they use episiotomy scissors. The thought of which is enough to make me shiver even six months later.

However, the episiotomy worked like a charm and it wasn't long before my son's tiny head appeared, face up, looking at us all; he was born in the sunny-side-up position. A few more coached pushes later and my little boy was placed on my chest and we both enjoyed some precious skin-to-skin time.

After some incredible first moments together with my mom and husband, my baby was taken aside to have all the usual checks and be cleaned up, as he looked like a super cute extra in a gory horror movie. It was then that the doctor came back in and asked if it was OK to stitch me up.

I'd totally forgotten about my episiotomy, but of course I wanted my perineum to be checked over and sorted out. At this moment my husband left the room, as he had done with all needle related interventions throughout my labor — he's more squeamish than me! The doctor got to sewing my bits up and I can say it wasn't the most comfortable of experiences. In contrast with not being able to feel anything when the episiotomy was performed, I could now feel every stitch. My midwife encouraged me to have some more gas and air, which I did. Very gladly. I'm not entirely sure if I was given anesthetic before the stitches, considering I'd had an epidural, but I'm sure it would've hurt a hell of a lot more if I hadn't had some kind of pain-numbing relief.

Afterwards I was super sore. The kind of sore that makes you unable to move as you normally would. Because I'd had an epidural, and maybe because of my stitches, I was wheeled through to the labor ward and helped onto a bed. My baby was wheeled through in the most adorable, transparent hospital cot.

My vaginal area was ridiculously tender. The only way I could get around was by walking like the Tin Man from The Wizard of Oz at slow-mo speed.

The days following were a blur of visitors and getting my head (and body) around what had happened. We had to stay in for a few days to make sure everything was okay, as I tested positive for Group B Strep towards the end of my pregnancy.

My vaginal area was ridiculously tender. The only way I could get around was by walking like the Tin Man from The Wizard of Oz at slow-mo speed. It stayed this way for longer than I imagined. When we got back home and adjusted to our wonderful new reality as a family of three, one of the things I found the hardest was the time it took for my stitches to heal.

During the healing period I couldn't walk very far, sit on my bottom (I had to sit leaning to one side), or bend down. We invested in an inflatable medical ring cushion so I could at least sit upright without putting pressure on my sensitive area.

Visiting the bathroom was another story. Luckily for me, my cut veered off to one side, so when I peed, the urine didn't trickle onto it. My friends who had episiotomies told me that was the worst part for them. I also took the advice of a midwife when it came to pooping. After everything my poor genitals had been through, I was pretty scared to poo. However, a midwife told me to put pressure onto the vagina with a sanitary pad or tissue, at the time of "fecal departure," and it really worked. Instead of feeling like my innards were spilling out of me, I felt normal. Ish.

I had to be careful with keeping my stitches clean and fresh, as they were trying to heal a wound after all. I didn't use any soaps down there and I took regular salt baths. My midwife said there wasn't any evidence either way to support the healing properties of salt baths, but they seemed to work for me.

At another appointment, one midwife exclaimed, "Wow, it's nearly down to your thigh!" Which made me wonder if I now had a Frankengina.

During our routine appointments to get baby checked, the hospital staff also checked on me. There was one point when my nether regions apparently looked sore and red, so I was swabbed but my tests came back negative, meaning I didn't have an infection. At another appointment, one midwife exclaimed, "Wow, it's nearly down to your thigh!" Which made me wonder if I now had a Frankengina. TBH, I hadn't dared to look at it since I'd been stitched up.

Further down the line, there was another appointment when my midwife informed me that I had a "knot" in my stitches, explaining that was probably why it had been particularly uncomfortable to sit on. She nicked the knot painlessly with a flick of her scalpel.

The days turned into weeks and before I knew it I could walk properly, get on my hands and knees for diaper duties, and I wasn't hurting anymore. It took about six weeks for my stitches to fully heal and dissolve. I took it very steady and continued being kind to myself, plus my husband and I waited a good while until getting back on track with our intimate activities.

Even though my healing process seemed to take forever and I sometimes feel a little funny down there even now, I am so pleased I had an episiotomy. Having that little bit of extra room for me to push my baby out made the world of difference to me. If I hadn't had my episiotomy, there would have likely been a higher chance of me having a c-section: I could have been left to take care of my body in the wake of a major surgery, instead of just a few stitches.

Sure, having your bits cut isn't the nicest thing in the world, but it's definitely not the worst. In my case, it was the best outcome I could've wished for!