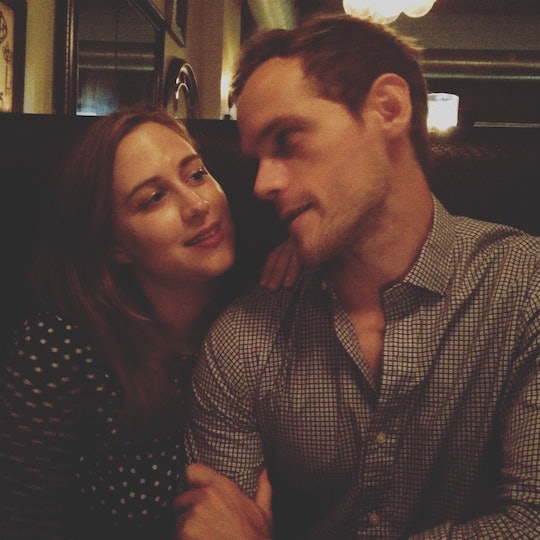 I Had Sex With An Oversupply Of Milk, & Hoo Boy

Postpartum sex that involves milk shooting out your breasts might be a male fantasy, but for me, it was a bit like a parental Inception: like we were both making a baby and also feeding that baby at the same time. I often felt too tired to bone down in my first few months postpartum. My body didn't look like it used to, which wasn't great for making me feel sexy. Getting really rambunctious was out of the question for fear of waking the baby. And did I mention I was tired? On top of all that, in those first few months I got to experience the joys of oversupply; this meant painful engorgement and letdown, leaking breastmilk at the most inopportune times — like when I was talking to my brother-in-law or out for dinner. Or when I was having sex with my husband. Yeah, I had sex with oversupply and it got weird sometimes.

If there was ever any kind of breastfeeding problem to have, oversupply might be the best one. Because while it is undoubtedly painful and awkward, it means you're always able to feed your child. And that is a wonderful privilege. But mixing oversupply with sex opens a new chapter of awkward experiences to share with your partner — and you thought it ended at birth.

The first time my breastmilk accidentally came into play during hanky-panky, I was still pregnant. I started producing breastmilk late in my second trimester. It would leak out at weird times, like when I was sitting at the kitchen table with my parents or trying to have a serious work conversation with my boss. And then, one time, it leaked out while I was, shall we say... riding my husband like the sexy stallion he is. The worst part — or best part, if you're me — was that I didn't even notice it was happening (I was having a really good time, obviously) until afterward, when I placed my hands on my husband's chest and he was literally drenched. His chest, neck, arms, face, and the bed were all covered in my liquid gold.

My husband laughed and I had a mild freak out until we Googled it and found out that oxytocin, the hormone released during orgasm is also released for "milk ejection reflex" or letdown. Thankfully, my husband is a pretty chill guy. He didn't mind getting sprayed in the face with breastmilk (probably because he was too busy enjoying the intercourse), nor did he begrudge the fact that we had to change the sheets. And so began my weird but not horrible experience of sex and oversupply.

Once the baby was born, we found strategies to prevent leakage like remembering to put a towel down before sex or wearing a bra. But eventually, we got really good at ignoring it and having a grand old time anyway.

I learned nipple clamps and oversupply don't mix; this seems like a no-brainer, but I had to experience it to believe it.

It wasn't all sunshine and milk bubbles, though. No matter how many times your husband tells you he doesn't care that you're drowning him in baby food, you feel self-conscious. Or at least, I did because let's face it, Ye Olde Milk Smell isn't the sexiest eau de parfum. And sometimes I got irrationally upset that all my beautiful, well-earned breastmilk was being wasted in between the sheets rather than being used for the purpose of nourishing my daughter. Nipple play quickly became less playful and more painful. So, often, my boobs were off-limits during coitus. But this was for the best because even if it didn't hurt, if ever my husband decided to grab a handful of mammary — or, heaven forbid, pop a nipple into his mouth — he was gonna get sprayed.

We also learned a lot. First, my husband learned that breastmilk tastes quite good. I mean, it's not something he'd ever crave in a latte, but he can understand why babies like it so much. And I learned nipple clamps and oversupply don't mix; this seems like a no-brainer, but I had to experience it to believe it. Sex with oversupply doesn't have to change how you have sex. It can even bring a new dynamic to the bedroom — I'm not suggesting you use breastmilk as lube. I'm simply saying it's like having sex on a slip and slide, where you are both the slip and the slide.

If you're wondering how to have sex with oversupply, my primary suggestion is to use a towel. Otherwise, it's best to just do it. Honestly, until you've Supersoakered your husband with your own breastmilk, you haven't lived.