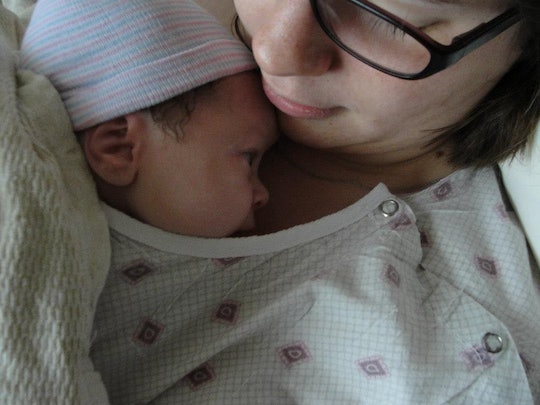 When we buckled my daughter into her car seat and took her home from the hospital after her birth, I was full of ideas about how I expected things to go. I will be the first to admit I had tons of unrealistic expectations about my life as a brand new mom. I expected to fall head-over-heels in love with my daughter. I also anticipated easily catching onto breastfeeding and loving it. After all, isn’t it the most "natural" way to feed a baby? I was sure I'd glide effortlessly into motherhood, I had always felt it was a role I was created to fill. But soon after getting home, I realized life with a newborn wasn't exactly going to go as I'd planned, and breastfeeding wasn't the cake-walk I thought it'd be. I now believe that I had D-MER, and because of that, breastfeeding was (and is) incredibly difficult for me.

My expectations did not line up with the reality of my life as a mother. I was in love with my daughter, but I found I was always struggling to understand this fragile, red-faced kid in my arms. The mechanics of breastfeeding were damn near impossible to figure out, and to top it all off, I was experiencing alarming symptoms every time I sat down to breastfeed. When my daughter latched and my milk letdown, I experienced a rush of negative emotions about myself, my daughter, and life in general. I didn’t know it at the time, but what I was feeling were the trademark symptoms of what many breastfeeding specialists refer to as Dysphoric Milk Ejection Reflex (known most commonly as D-MER). Experts who have studied the phenomenon describe D-MER as an uncommon disorder only present in a small percentage of moms.

Very little research exists on D-MER's diagnosis or treatment. While symptoms vary from mom to mom, breastfeeding mothers who identify themselves as having this disorder share one thing in common: when they experience letdown, they also experience extreme negative emotions for a few moments and then those emotions disappear. According to D-Mer.org, Dysphoric Milk Ejection Reflux occurs just before milk release and causes a woman to experience negative emotions. D-MER affects breastfeeding women. A case study on D-MER performed by lactation consultants Alia Heise and Diane Wiessinger and published in the International Breastfeeding Journal cited the need for further research on D-MER. The study's authors hypothesized that a drop in dopamine may take place when letdown occurs, which causes D-MER, but that has yet to be confirmed by further research.

Like clockwork, every two hours, I'd settle into the glider in the nursery, unsnap my nursing bra, and encourage my daughter to latch. Then, after a few moments of suckling, my milk would let down and I'd feel bowled over my nausea and depression. I was overcome with self-hatred and felt detached from the baby at my breast.

I first noticed my troubling symptoms two weeks into my breastfeeding journey. During those first two weeks, I spent much of my time obsessing about perfecting my daughter’s latch and trying my best to ignore the pain of cracked and blistered nipples that are a normal part of the early breastfeeding days. It wasn’t until these initial distractions resolved that I began to suspect something might not be right with my body’s response to nursing my daughter. Like clockwork, every two hours, I'd settle into the glider in the nursery, unsnap my nursing bra, and encourage my daughter to latch. Then, after a few moments of suckling, my milk would let down, and I'd feel bowled over my nausea and depression. I was overcome with self-hatred and felt detached from the baby at my breast.

But almost as suddenly as these feelings came on, they disappeared. I was left confused and overwhelmed. Had I really just thought those things about myself and about my daughter? Was there something wrong with me?

I visited with my lactation consultant regularly and we talked about weight gain and pumping strategies, but I never once brought up that I hated myself and my child for a few moments every time we sat down to breastfeed.

Here is the part I am less than eager to share: Even though I suspected that what I was experiencing was not normal, I didn’t speak out about my symptoms. I visited with my lactation consultant regularly and we talked about weight gain and pumping strategies, but I never once brought up that I hated myself and my child for a few moments every time we sat down to breastfeed. I couldn’t imagine how they would respond. Would they think I was a terrible mother? Would they demand I stop nursing? Would they take my baby away?

Fear kept me from getting support during a really confusing time of my life, but I dug my heals in and kept nursing through the confusion. And eventually, after about three months of breastfeeding, I started to notice my symptoms easing up and by the time I reached our six-month mark of breastfeeding, they had diminished completely.

In a world obsessed with screening for postpartum depression and guarding against SIDS and failure-to-thrive, no one was talking about D-MER.

After weaning my daughter, I became pregnant with my second daughter. This time, I was prepared for the possibility of having D-MER again and began researching it as much as a possible. I started jotting down ideas for coping and promised myself I'd speak out if I experienced it again. I hoped that this disorder was a one-time thing, but I was disappointed to find I had it again after my second daughter was born. I followed through with my promise, and spoke to a lactation consultant about my unnerving symptoms. I was disappointed to find she'd never heard of D-MER and virtually no support was available in the breastfeeding community. In a world obsessed with screening for postpartum depression and guarding against SIDS and failure-to-thrive, no one was talking about D-MER.

So, I learned to cope by myself. I found comfort in reading articles posted online and distracted myself by binge-watching Netflix while nursing my second baby. I held onto the hope that my symptoms would eventually vanish and counted down the days until I could enjoy breastfeeding.

Now, with my third child on the way, I feel more equipped to handle D-MER if I experience it a third time. Still, I find myself wishing I knew someone who could share my experience with me. I wish I could find an in-person support group instead of visiting about it with strangers online. I am glad to see so much awareness being spread for postpartum and prenatal depression, but when I looked into the eyes of a puzzled lactation consultant as I describe my symptoms, I know we have a long way to go to improve postpartum care.