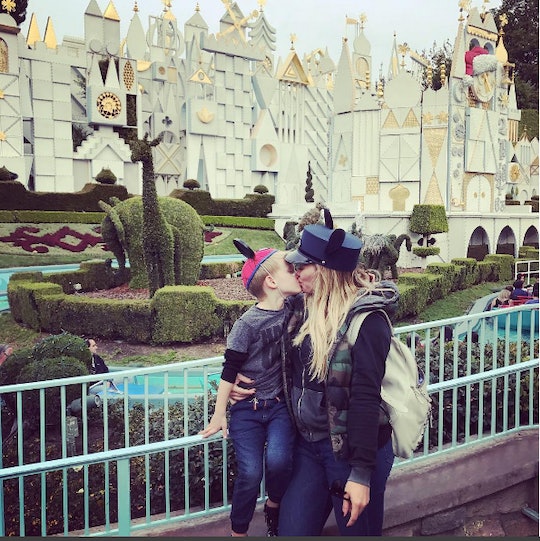 I Kiss My Son On The Lips, & I Don't Care What Anyone Thinks About It

"Mama, kiss?" my 2-year-old toddler asks, running up to me before I walk out the door to begin another workday. A kiss, a hug, and another kiss is our go-to morning ritual, and to break that ritual is to welcome a tantrum the likes of which few have ever seen.

I kiss my son on the lips every single day, and have since he was born. While I have been on the receiving end of a few raised eyebrows, shaking heads, and questionable stares, I couldn't care less if people have a problem with this token public (and private) display of affection. I kissed my son on his adorably tiny, newborn mouth seconds after he came into the world, and I will continue to kiss him on the mouth as long as he lets me and as long as we both consider it "appropriate."

I thought about this recently, when actor Hilary Duff was criticized for kissing her own 4-year-old son, Luca, on the lips during a family trip to Disneyland. After posting the photo on Instagram, Duff was met with a barrage of criticism from people who found the display of affection "gross" and "inappropriate." Duff responded with a follow-up post on Tuesday, saying, "For anyone commenting that a kiss on the lips with my 4-year-old is 'inappropriate,' go ahead and click a quick unfollow with your warped minds and judgment."

Sadly, I could relate to Duff's experience. The judgement and shame I've received for kissing my son on the mouth, from both family members on social media and total strangers, has been difficult to comprehend. They've said it's "gross" and it's "wrong" and it's "a slippery slope," as if simply kissing my son on the lips could morph into us having some sort of incestuous relationship.

Why does our over-sexualized culture believe that a sweet moment between mother and son is "inappropriate" and "gross?"

Of course, hearing these comments causes me to pause and rethink reality. I don't question my decision to kiss my son; I question our culture, not to mention the people who object to parents kissing their kids on the lips because it's perceived as sexual. Why does our over-sexualized culture believe that a sweet moment between mother and son is "inappropriate" and "gross?" Why is an act between a mother and her young son perceived as an overtly sexual, shameful act?

Given the stigma of public breastfeeding, I can't help but think that the shame surrounding kissing your child on the lips somehow stems from a similar place. Are we so afraid, as a society, of women using their bodies for something that isn't remotely sexual — like feeding their children, or showing their children they love them — that we sexualize everything a mother does? ‌

If I felt so inclined, I would explain to the people who judge me for kissing my son the blatant hypocrisy of doing so. I would tell them that I grew up in an abusive home void of any kind of affection, and I know what it's like to feel perpetually afraid of a parent, instead of comforted by the knowledge that they will always love you and comfort you and protect you. I would tell them that I kiss my son because I want to give him what I never had: a loving, warm, affectionate home in which you are kissed and hugged and cuddled, not slapped and punched and thrown to the kitchen floor.

For the entirety of my childhood, I doubted if my abusive parent loved me or cared for me. I refuse to allow my son to feel a fraction of what I felt.

For the entirety of my childhood, and to this very day, I doubted if my abusive parent loved me or cared for me. I wondered if there was something innately wrong with me, some unloveable quality that proved I was deserving of abuse instead of love. I refuse to allow my son to feel a fraction of what I felt. So, if kissing my son on the lips is a way to prove to him that I love him unconditionally and without remorse, then kiss him on the lips I shall, judgment be damned. And I don't think showing him that I love him with hugs and kisses will ever be "wrong" or "inappropriate."

Kissing my son is also important to me because I use it as a way to teach him the value of consent. He deserves to know that he, and he alone, is in control of his own body. The people he comes into physical contact with deserve to know that my son will always seek out consent before engaging in any kind of physical touch. So when my son asks for a kiss, I say "Yes," and kiss my son because I want to. I make a point of telling him that I want to, so he connects the act of physical affection with undeniable and obvious permission. Likewise, if I ask for a kiss and my son refuses, I do not shame him or scold him or make him feel guilty. I simply don't kiss him at all.

As a grown-ass human being, I can differentiate acceptable and appropriate behavior from behavior that is wrong and potentially harmful. I am not "scarring" my son for kissing him on the mouth, anymore than I "scarred" my son by feeding and sustaining him via my breasts. Sexualizing specific body parts under the guise of voicing "concern," is nothing but an attempt to control my parenting choices. If a mother out there (and I'm sure she exists) chooses not to kiss her son or daughter on the lips, I am acutely aware that her choices doesn't harm, inhibit, or devalue my own.

So, instead of paying attention to those raised eyebrows, subtly shaking heads, and questionable stares, I'll simply kiss my son when he asks, "Mom, kiss?" Every. Single. Time.