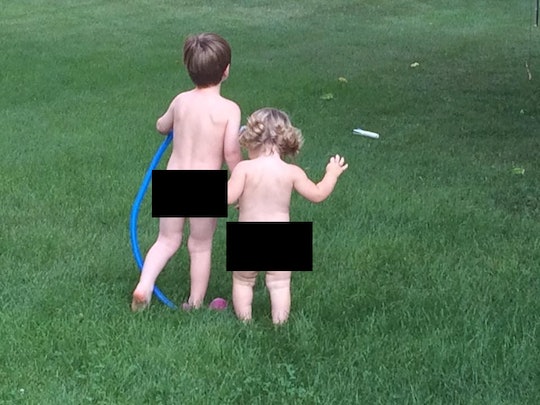 I Let My Toddler Run Around Naked & I'm Not Sorry

My children spend most of their lives naked as little jay birds. I'm pretty sure our property has been unofficially designated a nudist colony. This past summer, I don't think my daughter had clothes on when we weren't leaving the house. But even beyond our borders, my kids have never had any qualms about "putting themselves out there." Now that they're getting a little bit older, I try to teach them the importance of "time and place," but when they were toddlers? Ha. I let my toddlers run around naked in public and I'm not sorry.

Look, it's not like I defiantly march them nude into libraries and grocery stores to make some sort of body positive, political statement. I don't look at signs that say "no shirt, no shoes, no service" and, in protest, encourage my kids to disrobe. If we leave the house we put on clothes. But they regularly failed to grasp the concept of which body parts are supposed to be hidden from public view and which are fair game. They'd run out of a public bathroom with their underwear around their ankles (or, when they were younger, remove their diapers all together). My daughter had an inexplicable habit of lifting her shirt or dress above her head everywhere and anywhere for no discernible reason. It's not that I'd let these things go unchecked — I would casually put an end to their random acts of streaking — I just didn't get flustered or bent out of shape about it. I'd usually chuckle, snap a picture (because what is parenting if not a decades long blackmail scheme?) and tell them it was time to put their clothes back on. This casual approach is very much intentional.

I don't know if you know this, but American culture has a really messed up relationship with casual nudity. Highly sexualized, intentionally titillating, quasi-nudity? Well, obviously, use that to sell all the beer and bras and hamburgers you possibly can, because capitalism. But a nude butt on a beach? Or, heaven forbid, a female nipple?! Won't someone think of the children?! Clearly that sort of thing is going to be damaging to their psyche!

I'm not sorry for not caring too much with the occasional flash of toddler bum out in the world. I want my kids to know, that, yes, there's a time and place for being nude, but their bodies are never inappropriate.

I mean, really: how screwed up is this? The only cultural nudity we see is mostly thin, mostly white, mostly female bodies that are being used to satisfy the male gaze. Is it any wonder, then, that body dysmorphic disorder affects between five and 7.5 million people in the United States? (And that is, arguable, low-balling it?) We basically have no exposure to nude bodies that do not fit a societal ideal, and we have no cultural conditioning about how to react to nudity except to view it as sexual.

I recognize that, despite my hippie philosophy and the woods that encircle my house, I do live in society, so there are certain rules I sort of have to follow. I know I can't eschew clothing all together whenever I feel like it or allow my children to follow their every clothing-optional whim. But I don't have to buy into the mentality that tells me it's important to keep nudity not just private but shameful. So, in our home, clothing is optional. And if some toddler-aged nudity happens in public, either intentionally or by accident, it's no big deal and no reason to clutch my pearls. Yes "time and place" is an important lesson, but a more important lesson is "your body is not a source of shame" and, frankly, I've never heard an argument against nudity in general or child nudity in particular that didn't hinge on that idea.

Yes, there are perverts and child predators out there and those people exist whether or not your child is comfortable with the idea of their own nudity. And they're miscreants whether or not your child accidentally flashes their tush because said child is 2 and doesn't have a concept of what is or isn't appropriate public behavior just yet. Frankly, I fail to see how "keep your toddler covered because there are perverts out there" is any different than telling sexual assault victims they were "asking for it" because of what they were wearing (or not wearing). That's not how this works. Moreover, a mentality that links nudity to sexuality to shame is the same mentality that makes exploitation easier and keeps abuse hidden.

My favorite (read: insulting to the point that all I could do was laugh) reaction to the fact that my toddlers basked about au naturel was the idea that I was "raising a hoochie." And, yes, this was particularly aimed at my daughter — my toddler daughter. This person had less issue with my nude son. "I'm going to teach my daughter to respect herself and her family," this person declared. So, in other words, nudity equals sexuality equals shame. And any display of (in this case female) sexuality (and, I cannot stress enough here that we're talking about children) is a sign that a person is not worthy of respect and cannot possibly be respectful.

That's not what I would consider a healthy attitude, my friends.

My children, especially my daughter, are going to eventualy be inculcated with the idea that when it comes to their bodies, everyone else's opinion and comfort matters than theirs. They will be told — by friends, by acquaintances, by ill-intentioned strangers, and by society at large — that their nudity is inherently shameful and sexual in any context. I'm not sorry for wanting to shield them from this idea by allowing them to be comfortable in their own skin and building up positive or just neutral experiences with their nude bodies. I'm not sorry for not caring too much with the occasional flash of toddler bum out in the world. I want my kids to know, that, yes, there's a time and place for being nude, but their bodies are never inappropriate.

More Like This
These 9 Potty Training Techniques Will Work On Even The Most Stubborn Toddler
How Often Should A Toddler Pee When Potty Training? It Depends
Tips For Apple Picking With Kids
Here's How To Handle Potty Training During Nap Time