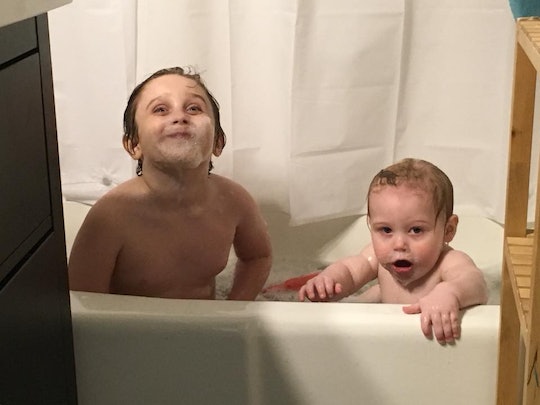 I Post Naked Pictures Of My Kids & No, I'm Not Sorry

The other day a photographer friend of mine was banned from Facebook for posting a picture that violated the site’s community standards. The offending post was shocking... in that it was absolutely not offensive at all. It was simply an adorable picture of her babies in the bathtub. So, when I heard she was banned from the site as a result of that harmless photograph, I was furious.

I post naked pictures of my kids online all the time. I don't think there's anything inherently sexual about nudity unless you make it sexual. And when it comes to pictures of happy naked children I assumed, for better or for worse, that people considered these pictures to be adorable, innocent, and indicitive of the care-free life we should all hope our children have. Turns out, I was very, very wrong. People have a big problem with nudity regardless, and will even go so far as to take the time to report parents who post naked pictures of their children to their personal social media platforms.

Now, I’m not saying that parents shouldn't get to make their own choices about posting photos of their kids on social media, or that parents who decide to forego the naked bum pictures are automatically sexualizing their children. As with any other parenting decision that doesn't harm your children: you do you. I also understand the argument that naked pictures of children could be downloaded and use by predatory people, so if you choose not to post pictures of your kid's bath time as a result of that fear... hey, I get it.

I don't want them to fear their bodies and how powerful, beautiful, and capable they are.

Personally, I find people's discomfort with childhood nudity to be wildly bizarre. I mean, how does someone look at a naked baby picture and automatically think, "Wow, that kid needs to cover up." I think naked babies are one of the most adorable and joyful things on the planet, and their clothing-free existence is nothing to be ashamed of, and certainly nothing to be regulated by social media sites or their oh-so-sensitive users. If seeing my naked baby or toddler is upsetting to you, well, I think that says more about you than it does me or my naked children.

As children we're told we should be ashamed of our bodies, so while I do find it bizarre I don't think it's entirely surprising that our culture seems to have this knee-jerk reaction to naked children. Our society has created elementary school dress codes banning visible shoulders and short skirts, preaches "modesty" while simultaneously chastising women for being "prudes," and tells children their penises and vulvas are really [insert ridiculous "baby name" for a child's anatomy here]. If we feel at all awkward about naked children playing or kids enjoying a bath, it's because society has told us we should.

Are there people in this world who would use an innocent picture of a naked child for anything-other-than innocent purposes? Of course. And that is something to consider, I think, as a parent. But just like any other parenting decision — including the decision to post pictures of your child with them fully clothes or "checking in" to a public place with your family on Facebook — there are smart, safe ways to celebrate your child's innocence and freedom. If someone trusts me to raise my children safely, they should trust me enough to understand that I know how the internet works and can protect my children from online predators without demonizing nudity or their decision to forego clothes when they're playing in our backyard.

Plus, statistically, your child is far more likely to be harmed by someone you know and trust than some faceless anonymous predator on the internet. According to La Casa, the best way to prevent sex abuse is to forge a healthy relationship with your child, teach them about boundaries, and create less shame — not more — about their bodies. Showing my children that their bodies are nothing to be ashamed of will only make it easier for them to come to me if someone is touching them inappropriately, making them feel uncomfortable, or asking them to take pictures they don't want to take.

They will know my reasoning for being unapologetically celebratory of their choice to run around our house nude, and I can only hope that they understand why I would never want them to feel ashamed for being who they are and loving the skin they're in.

As parents, the last thing we want is for our child to get hurt. So, understandably we do everything we can to keep them safe. But we've also created a culture of fear and judgment, as a result of this need to constantly protect our children, and it's that very culture that I want to combat. I don't want my children to be ashamed of their bodies, or think that I am ashamed of their bodies. I don't want them to fear their bodies and how powerful, beautiful, and capable they are. And, for me, not being afraid to post pictures of my kids simply being kids is part of that process and desire. If I'm not ashamed of their choice to go commando, they won't be either.

Now, I fully admit that I don’t have a problem with adult nudity, either. It’s such a non-issue for me to see a mom breastfeeding or a dad snuggling his sick child in the bath. But what I consider to be beautiful, innocent, natural images have been placed in the same category as pornography or sexually content, and trying to buck against this notion is proving to be an uphill battle. Still, it's a battle I refuse to lose by catering to the idea that nudity is automatically inappropriate.

When my children are older I will, of course, listen to them and let them be the judge of what’s OK and not OK for me to share online.

Perhaps my children will feel differently when they're older, and resent my choice to post naked pictures of them online. And, like any other parenting decision I've made for what I believe to be their benefit, if that day comes we will cross that bridge... but only when that day comes. I'm sure my children will have more than a few choice words to say about one of the many other parenting decisions I have made, but they will also know that my choices have always been made with them in mind. They will know my reasoning for being unapologetically celebratory of their choice to run around our house nude, and I can only hope that they understand why I would never want them to feel ashamed for being who they are and loving the skin they're in.

When my children are older I will, of course, listen to them and let them be the judge of what’s OK and not OK for me to share online. And if they ever ask me to take a picture down, I will absolutely respect their wishes. Until then, however, I will freely share their adorable bath pictures and baby butts...

... because, in my home, our naked bodies are not something to be ashamed of.